Somehow I miscounted (which could explain some gauge issues), and I actually have 9 embroidered towels--not ten. Oh well. I have plenty more blank towels and nine is still a respectable amount. After washing out the stabilizer: 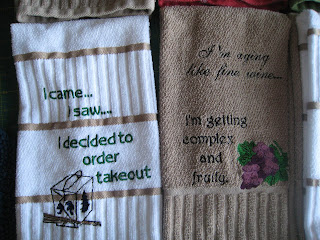 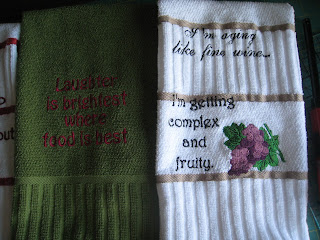 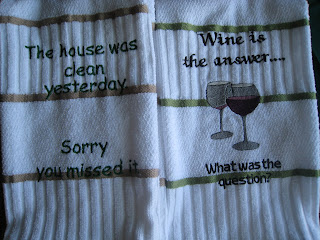 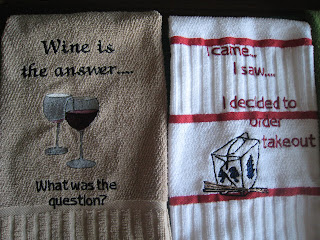 There are some duplicates, so I didn't photograph all 9, but I'm generally pleased with the results. In the future I think I'd center better so the words aren't on the color stripes, and I'd do a different color thread on the green towel, but I'm learning. I've had my sewing/embroidery machine for 3 years now, and am just starting to get comfortable with the embroidery part. The instruction book made it QUITE complicated, and to be honest I've eliminated a few steps because they made it so difficult I would never had embroidered anything if I followed their advice. Now, if I ever endeavor to do embroidered buttonholes on anything, I will dig out their fussy instructions and follow them to the letter, but as I have only recently stopped loathing doing normal buttonholes, I don't see it happening in the near future.

In knitting news, the August scarf is done 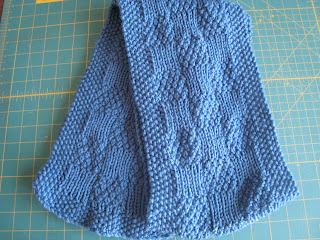 and awaiting the weaving in of ends & a little blocking, and even better, I have resisted the urge to cast on something new and did several rows on the yoke sweater 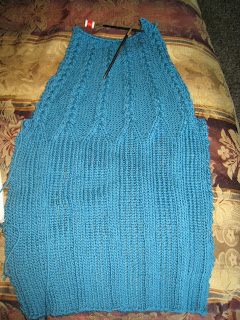 while enjoying some sunshine with my little sidekick 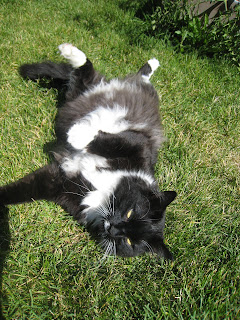 though I just don't appreciate tummy rubs like he does.