That's right--as of 7:00 AM on December 23, we're on cast number 7. What happened to cast number 6 you might ask? That one was put on yesterday at Theo's checkup and was off by the time I got Theo home. He is a legend at West Vet now. 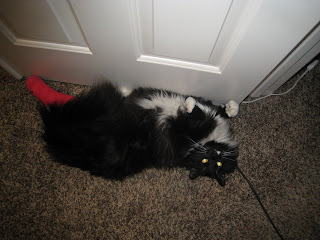 So at least I had knitting with me. That's the good part: 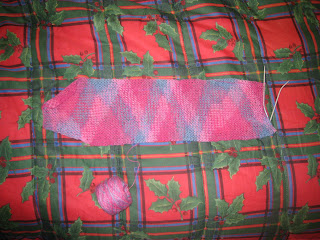 And that Theo has 2 more weeks of a cast and that the vet thinks everything looks good.

Since nothing about this can be simple, Theo has a staph infection and it's a fairly resistant bacteria, so we have another 10 days of antibiotics to go and it's a VERY large dose. When they gave me the bottle, they said "At least it's cherry flavored." ???????????????????????? Do you know any cats who each cherries? And to give him medications, I hold his head, pry his little mouth open, and shoot the medication into the back of his mouth with a syringe. Do you really think flavoring of any sort is going to make it better???

The strange thing is that I'm the one who gives him his medications, hauls him to the vet, puts Bitter Yuck on his cast so he won't chew on it--or the kitty cone when things get really serious--and Theo is more attached to me than ever. He's not a clingy cat, but he must now be within sight of me. Poor little guy--thankfully he doesn't seem to carry a grudge.

Before the whole kitty drama started yesterday, I put these together: 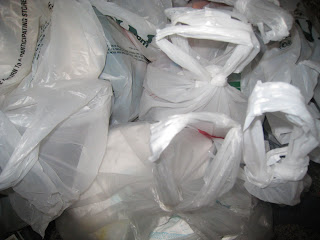 I borrowed the idea from a "Personal Sock Club" idea on Ravelry. There are 12 bags and they each contain a project. I mixed knitting, sewing, machine embroidery, and one hand embroidery (obviously I was feeling that knitting was just too darn speedy and needed something even slower to work on). Each month, I open the bag and complete the project. Some of the projects have been waiting for a while, so I thought this might give them a better chance. And now that I've publicly admitted to this project, it has a much better chance of happening. When sheer willpower won't get me results, I go straight for public humiliation. It got MS3 done, didn't it?