How a cat can tell from inside the house that it is substantially warmer OUTSIDE the house is a bit of a mystery, but this morning was our warmest morning in weeks, and Theo returned to the habit of waking Andy up at 5:00 AM to be let outside and actually went out.  Even more surprising, he caught a mouse.  Thanks to two nights of freezing rain and freezing temperatures, our backyard is covered with some solidly crusted snow, so I have no idea how Theo found the mouse, but as miserable as the temperatures have been outside lately, I strongly suspect the mouse was suicidal and simply gave himself up.

Andy and I spent a good hour or more breaking ice off our driveway and sidewalk yesterday, so I was pleasantly surprised to be able to move at all today.  I'm sore, but was able to spend all day in the sewing room!!!!  Which is good as it took me almost half the day to get more lace ornaments laid out on the computer 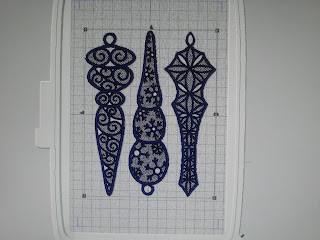 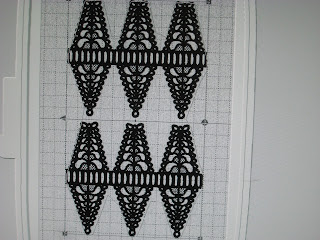 and transferred to my embroidery card.  This part: 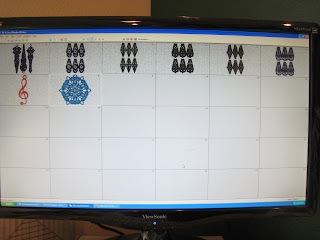 kept crashing, possibly because I was trying to load too many large designs onto the card.  Newer machines have USB ports which would be a lot easier, but newer machines are mostly made in China, so I can live with cards.

The lace icicle designs actually came as a set of 6, so I wanted to make the other 3 in light blue as well: 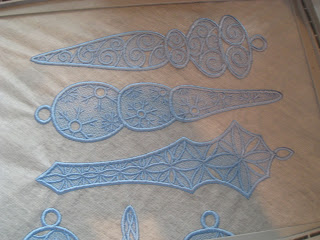 giving me a full set.  I just love how they're all different.   And different on purpose--not just because I mucked something up.  The other sort of "different" I don't love nearly as much....

When I decided to try for 365 ornaments this year, I purchased 4 ornament design packs that I'd been looking at for a couple years.  The 3-D ornaments and lace icicles I've now mostly done (there are still some 3-D ones, but I want to sew the existing ones together to make sure I like them before doing the remaining designs), one design set is cute, but more complicated, so today I tried the 4th set: 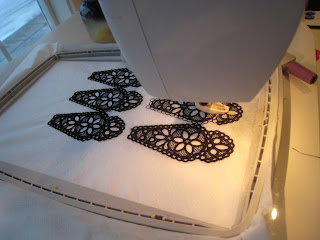 These are ornament covers for ball ornaments.  We have some plastic gold ball ornaments I bought several years ago (It being just too cruel to bring glass ball ornaments into a house with a clumsy woman and a hardwood floor), and I thought a black cover would look nice on one of them--not to mention it would use a thread color I would be unlikely to want for any other ornaments.  And I'm glad I did use an unusual color, as these use a LOT of thread.  I will definitely be sewing this one together to make sure it works before doing the others.

While Jeeves was working on the ornaments, I fired up the two sewing machines and worked on the micro-suede set.  When people see the sewing room, I always know they think I'm a bit crazy for having two sewing machines, a serger, and the sewing/embroidery machine (or maybe it's just the crazy amount of yarn and fabric staring at them from all sides), but it is SO handy to have one set up for basting with an alternative thread color that is easily pulled out while the other is set up for sewing.  Really, there are days when I have all FOUR machines going.  I love those days--they make me feel like the Queen of Crafting--rather than The Deranged Lunatic Who Has An Insane Amount of Crap In the Sewing Room.  Some days, it's a very fine line............