......and I'm not going to make it to 100.  There is a level of insanity which exceeds even MY limits.  I did finish one more table runner: 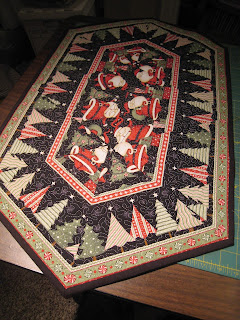 and here's a little tip for you: stippling is really, really SLOW.  Even if you're not doing it very well.  The second one is pinned and ready for quilting as well, 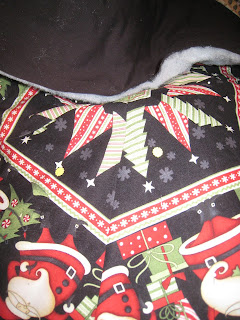 but even if I get a chance to start it today, that would only put me at slightly over 95 yards for the year, and I've got a lot of things I need to get done today.  What I am happy about is using up one of the fabrics that was my "last hurrah" purchases from December 2015. Not most of them, but one more.  I wish I had realized the border would shift a bit when stitched together, 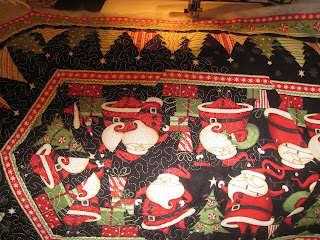 and perhaps that one of the table runners would end up sporting an inordinate amount of mutilated Santa Clauses.  I think these won't be going to homes with really small children.

And, I'm back on the fabric wagon.  I waited two more days, made my planned purchases, 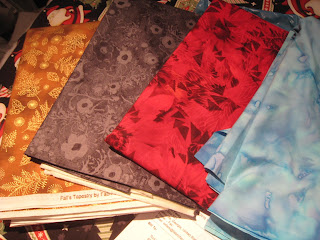 and am back for another year of sewing from stash.  There's another order coming, which hurts my numbers as there's a bolt of muslin, but I wanted a nicer one and I use a lot of it.  But I still used up more than I bought, so my stash has decreased and I'm ready for another year!

Speaking of 2017, I have decided to continue with Me Made Mondays, though not the 20 new projects part as I'm hoping to be back to work soon.  I'm also going to try for 100 finished projects again--regardless of yardage.  I didn't make several projects I was interested in because they didn't use enough yardage, so I'll go back to focusing on projects and hoping that clears up some more space in the sewing room.  I think there will be a noticeable difference already, once I clear away the December carnage.  Between wrapping gifts, making gift bags, and the final made yardage dash, my sewing room looks like it was attacked by fiber-crazed lunatics, but 94 yards takes up a lot of space.  Not as much as what's left, but a lot.