I really, really was working on the mohair sweater yesterday.  I promise.  However, it turns out that when I take a drink of coffee and end up with a mouth full of coffee grounds, my natural impulse is to spit it back into the cup.  Not exactly worthy of Ms. Manners, but perhaps understandable.  This probably works with normal coffee mugs, but when one is drinking out of a travel mug complete with lid, the coffee's natural impulse is then to splash off of the lid and onto the nearest, whitest object.  Which explains why this 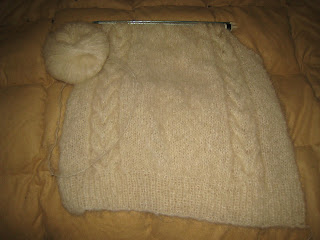 spent yesterday being rinsed and dried, and why there is now a second birthday sock in progress 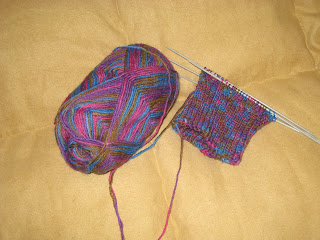 which also was not in my Valentine's basket.  I was at first a bit concerned that the socks won't get to count for anything on my 12 12s list, but as they were in progress before the start of the year, I'll count them as one of my 12 WIPs.  I may regret that later, as I'm hoping the need for finished WIPs will eventually drive me to examine the Sewing Project Time-Out Basket, but as there is still no indication when I'll be able to sit long enough to sew, this may work out for the best.

The projectile-coffee fiasco did have one perk.  As long as one is washing one knitted item, 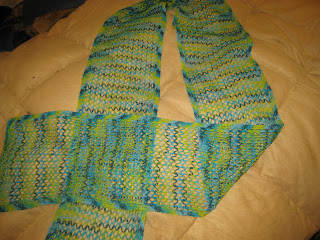 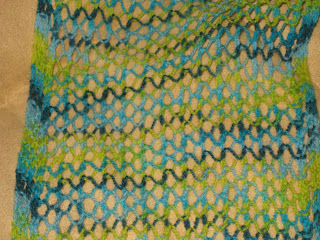 one might as well wash a second.  The lace scarf is now clean and blocked, and as soon as I get the ends woven in, will be ready for the gift bin.  I am so pleased with how it turned out that I actually had another hank of this yarn dug out of the gift bin before I remembered that I was trying to knit sweaters this year.  At least I'm being distracted by yarn I already own.  That's a fairly new occurrence for me........