Today is the 4-week anniversary of the Cat-in-a-Cast-Ordeal! We have a vet appointment at 11:30 today, and I'm hoping he'll get a smaller cast, or that we'll hear that we only have two more weeks of this to go!

In the meantime, the three of us attended a Christmas party on Saturday night. Since Theo has started removing casts, Andy and I have been taking turns going to parties so one of us could stay home with Houdini. The lovely people hosting Saturday's party are animal lovers themselves, so they invited Theo as well. He actually did pretty well--we had borrowed a dog crate from some friends, and I put his fleece in there, and he basically was pretty quiet during the party. He's getting a little bored, so it might have been a nice change for him.

We've given him a bit more freedom over the last couple days, and instead of needing some time without us, Theo has become my shadow. He doesn't have to be on my lap or anything, but he does need to be in the same room. Here he is now: 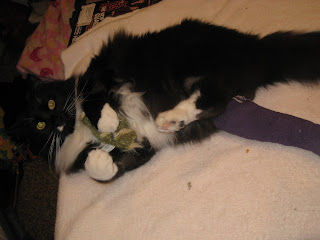 where he alternates napping & beating the daylights out of Godzilla. He still wants to go outside in spite of 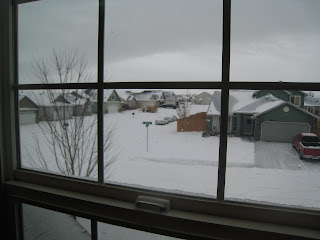 Last night I made some napkins 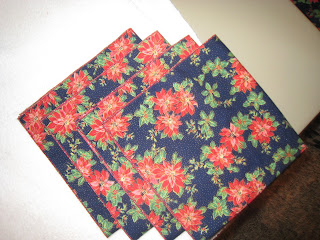 which will match the Christmas placemats I made about 5 years ago. 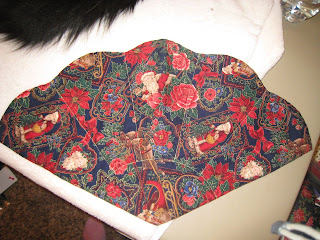 It has taken this long to find a material that matched. Fabric companies really have it figured out--they only produce fabrics for a short period of time, and if you don't buy it then you'll never find it again. This is my current excuse for the size of the fabric stash. It's all THEIR fault. And chocolate doesn't make people fat....

The new scarf is progressing nicely 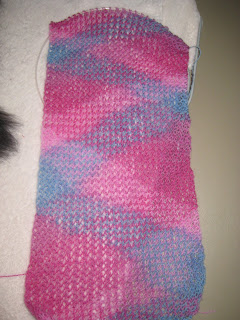