The Knitting Gods Have a Rival

I think amongst the knitting world, the Knitting Gods are known to a cruel and vindictive lot.  Boast even the teensiest amount about one's own cleverness or how well a project is going and SMACK--the knitter's needles or yarn or BOTH are bound to break, or a wave of moths are about to descend.  They're a cantankerous lot at best.

However, I think they might have met their equals in the Physical Therapy Gods.

Remember me saying that I had to walk so slowly on Friday that I didn't even boost my circulation?  Yeah--big mistake.  That slow walk actually threw my hip back out.  I thought maybe it was just sore, but by Saturday night--it was definite.  Luckily, I have been shown how to force my hip back into place with my new toy 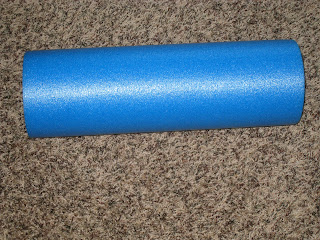 Unluckily, the very concept of having to move bones about is generally enough to make me want to hurl, but it turns out that pain is an excellent motivator and Valium can take my mind off anything--even consciousness.

So, I was having a rather lousy weekend anyway, but was at least showing some crafting dedication.  I had decided to add a bonus "12" to my list and do 12 threads (half threads, really, if those long strands count as one thread) on that silly cross stitch this year.  Not too much, but it would set a recent record on the amount of attention the cross stitch has received.  So, 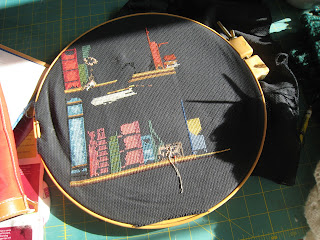 I am now up 2 threads for the year--whoo-flippin'-hoo!  That gives me a whole inch of progress.  Stand back world!

Then I had spent considerable time finishing up one side of the current shawl WIP, picking up the second side, and thought it time to put a picture of it on the blog: 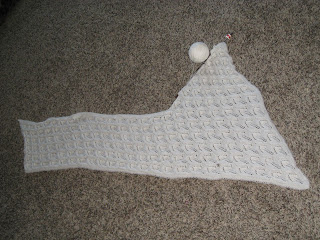 and was just about to pick it back up when I noticed an odd little spot on the bottom..... 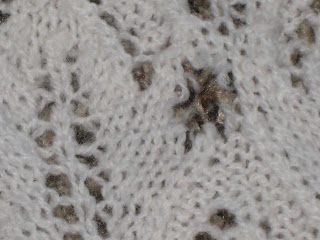 (Say what you want about cats' indifference--Theo knowns a knitting scream when he hears it and came running, 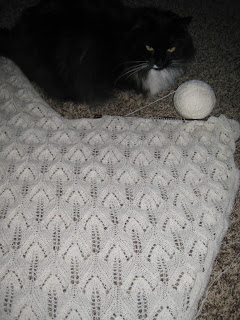 Maybe those Knitting Gods don't like competition.  I don't even know what could have happened--it's been in knitting bags and a dresser drawer and we don't have moths.  I'm not sure if I have the patience or talent to actually fix this thing, and I've been a bit unhappy with this yarn's tendency to felt anyway (Knitpicks Bare in laceweight), so I'm not sure what I'll do.  There would be a lot of knitting left to finish the darn thing and it would always bother me that it has a damn hole, or I could just chuck the whole thing, destash about 1600 yards of a yarn I'm angry with, and be out $12.  OR I could put it away until I'm having a less rotten day (which won't really isn't a very high bar) and go play with some new yarn....and a white chocolate martini..........