The new scarf is done, 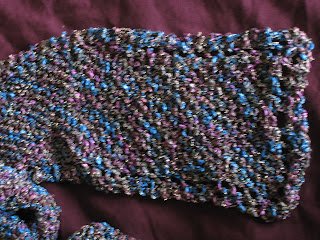 which brings me to 9,742 yards of yarn for the year.  I'd like to say I didn't sort through my yarn stash looking for a quick project involving a skein of 260 yards, but I'd also like to be able to eat chocolate without putting on the pounds--and that certainly hasn't happened.  My fantasies obviously have NOTHING to do with the real world.

In the end, I opted to cast on Elizabeth Zimmermann's Epaulet sweater: 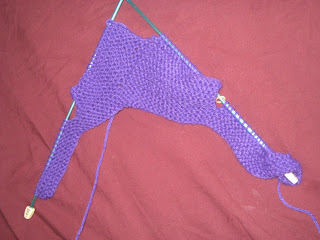 I'm using Lion Brand Wool-Ease, which isn't my favorite for sweaters, but I had bought a couple bags of the stuff when I was trying to convince myself to learn steeking, thinking that I'd rather cut up cheaper yarn than nice stuff, but I did learn to do it anyway, and have had this yarn lurking in the closet for a while.  This is a brilliant but complicated pattern, so the odds of me making a mistake are pretty high, so I thought this would be a good project/yarn match.  It's another of her seamless sweater ideas, and first one knits what will be the collar band, then starts knitting little bits for different parts--the second step was to knit a rectangle in the center of the band, and now I'm knitting a shoulder "saddle" at a right angle to that rectangle.  It's all in garter stitch, so eventually it will be nice, mindless knitting.  Eventually.  Right now I'm in the "blind faith" stage, and must constantly double check each direction.  By the time Andy brought me a white chocolate martini to celebrate the end of a very long week, I was almost positive that either EZ or I, or possibly both, were completely out of our minds.........

After getting a bit boggled with the new pattern, I gave the socks a little attention: 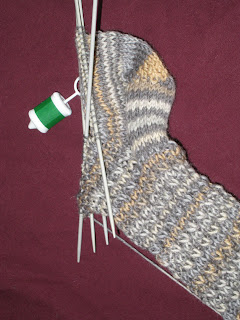 and the fact that they're using a big, massive 460-yard ball of yarn that will finish up an entire entry on my Ravelry stash page (after starting with 3 or 4 balls of this stuff) had a lot to do with my motivation.  I've promised myself to re-evaluate Cold Sheeping once I get to 150 entries in my "all used up" tab on Ravlery, and the new scarf brings me to 64.  Looking this up is what kept me from doing the truly insane last night:  casting on a new sweater in fingering yarn and size ONE needles.  Because having an insane crafting goal involving 12 sweaters in one year and being two behind is EXACTLY why such a crazy thing would occur to me.  I'm probably lucky I didn't cast on a lace bedspread.

I am finally biting the bullet today and putting pinholes in my nice painted walls in the sewing room: 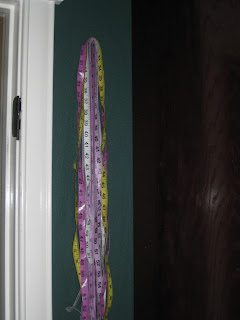 which will hopefully make it possible to start doing some real sewing again. 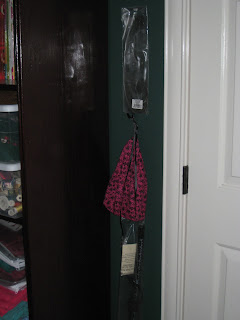 This morning I finally found the box that was probably packed up first:  the one containing the stuff I use most.  Scissors, pin cushions, marking pens, tracing wheels, and while Scavenger Hunt Sewing has been a new angle, it has made it really difficult to cut out patterns, sew them together, or pretty much do anything except the "Scavenger Hunt" part.  Not that it hasn't been fun, but it's not helping much with taming the fabric stash.  If I am ever feeling really idiotic, I'll figure up the yardage of fabric that I have--but that can wait a while.  Like until I'm 89.............