Hope everyone had as much fun as we did on Thanksgiving.  I got to go somewhere!!!!  The last 2 Thanksgivings I have spent in bed drugged to the gills, so I would have been pleased with anything, but we had THE most delightful time with our friends and everyone had a lovely time, so it really was a great day.

And, instead of the Black Friday greed stampede (which in all honesty I have even been tempted to participate in), I worked on gifts 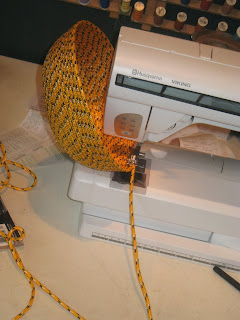 including a new approach for a bowl.  The bowl started the whole idea, as after working on the base Thanksgiving morning before retiring to the kitchen to make stuffing, I came back Thanksgiving night to find the base curling upwards.  Or downwards--it was pretty flexible on that part, it just didn't want to lay flat.  So, if you can't beat them, join them. 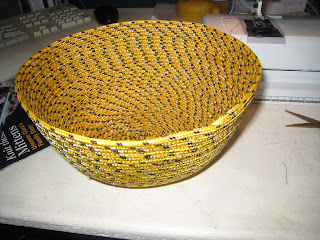 Usually I use the sewing machine side as a guide for doing the sides of the bowl, so it was a bit of a learning curve to try to just hold it at the right angle.  It was definitely a learning experience--and perhaps my first Learning Opportunity  in crafting that didn't involve swearing.  I even 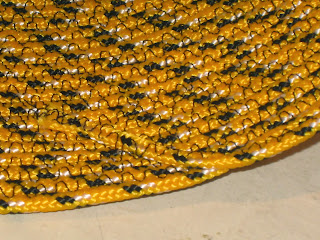 feel really good about my finish, 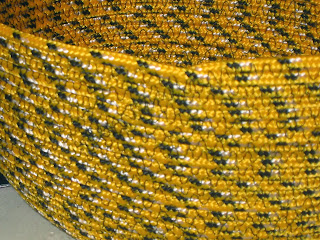 Lulled into a false sense of security by the Crafting Gods, I decided to drag these back out: 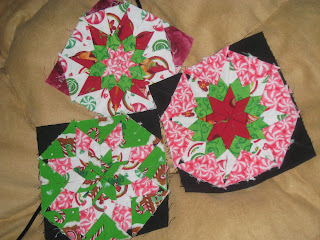 Anyone even remember these?  I've actually kept them at the ironing board so I could make a few triangles whenever I've been ironing something, so they aren't quite as neglected as one might think. And I thought it would be fun to be able to suddenly announce THREE finished WIPs.  And I'll bet it would have been fun. Unfortunately, there was a little bit of a hiccup. 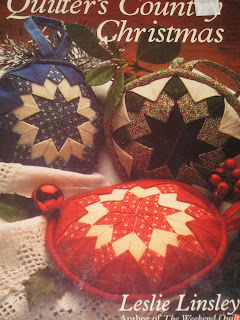 Now as you might be able to see, I paid 50 cents for this book a few years ago, and even in used books, one can often get their money's worth.  For a whole dollar, I might have gotten an explanation of how the author cut her ornaments into circles.  Or an explanation of why the picture on the cover CLEARLY shows ornaments finished with binding, while the instructions say to use piping and to attempt to sew these with right sides together even though the front will be insanely stiff because of all the triangles now attached to it, 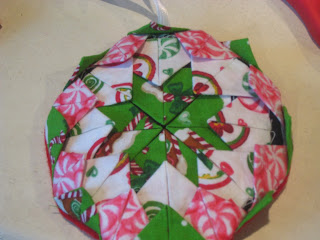 or that will be peeling OFF of it after attempting this lovely sewing feat. 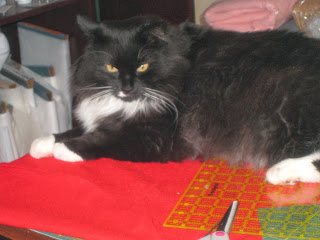 I think Theo was a bit shocked at my description of the author's parentage, personal hygiene habits, and mental condition.  He's obviously forgotten the Ribbed Yoke Pullover incident........

Luckily, I had chosen to start with one of the first pieces I did, 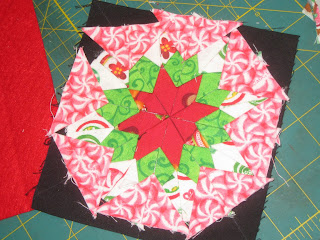 which (like this one) was done on a piece of fabric not quite as small as it was supposed to be.  I'm hoping to be able to get the first one salvaged and finished normally--if it survives me ripping out the stitching, and I'm just going to take this one apart and start over on something that's the right size.  And, in case you were wondering, putting them together with webbing tape doesn't hold them together nearly as tightly as one would have thought.

One is actually the right size, 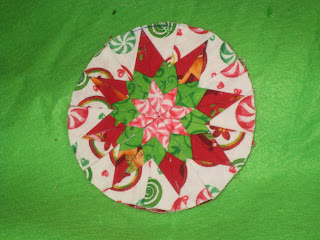 and as soon as I figure out what to use for binding, I'm thinking a green felt back would be kind of fun--if I can have fun with these ornaments by now.  Had I realized that I might want matching binding, I could have saved one of the fat quarters in the nice little Christmas pack for binding.  Wouldn't that have looked nice? I don't know why I keep taking instructions at face value.  You'd think I'd be catching on to this by now--especially considering all the time I've spent with a seam ripper. But then again, if I ever DID catch on, I'd probably stop trying new patterns, so I guess being a REALLY slow learner is okay in some situations........ 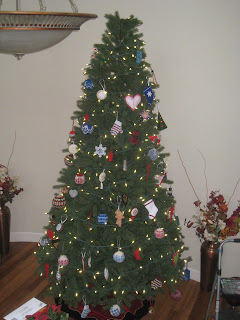 the big tree is up and is looking pretty good so far.  It's not 100% handmade ornaments, and I really hadn't intended for one tree to primarily be the "homemade" tree, but I was so excited to see them on a tree and I haven't put the smaller one up yet, so I guess this is the mostly hand made tree.  I've been adding the ornaments our friends and relatives have made as well, so that makes it even more fun.  And if I ever get that quilted ornament figured out, the back of this baby needs some ornaments as well.........