The Best Laid Plans of Cats and Women

Last night I ironed the red flannel to be ready for a morning of sewing.  As forecast, it is raining, which is a perfect time to make flannel pajamas.  It is also, however, the perfect time for a snooze on flannel. 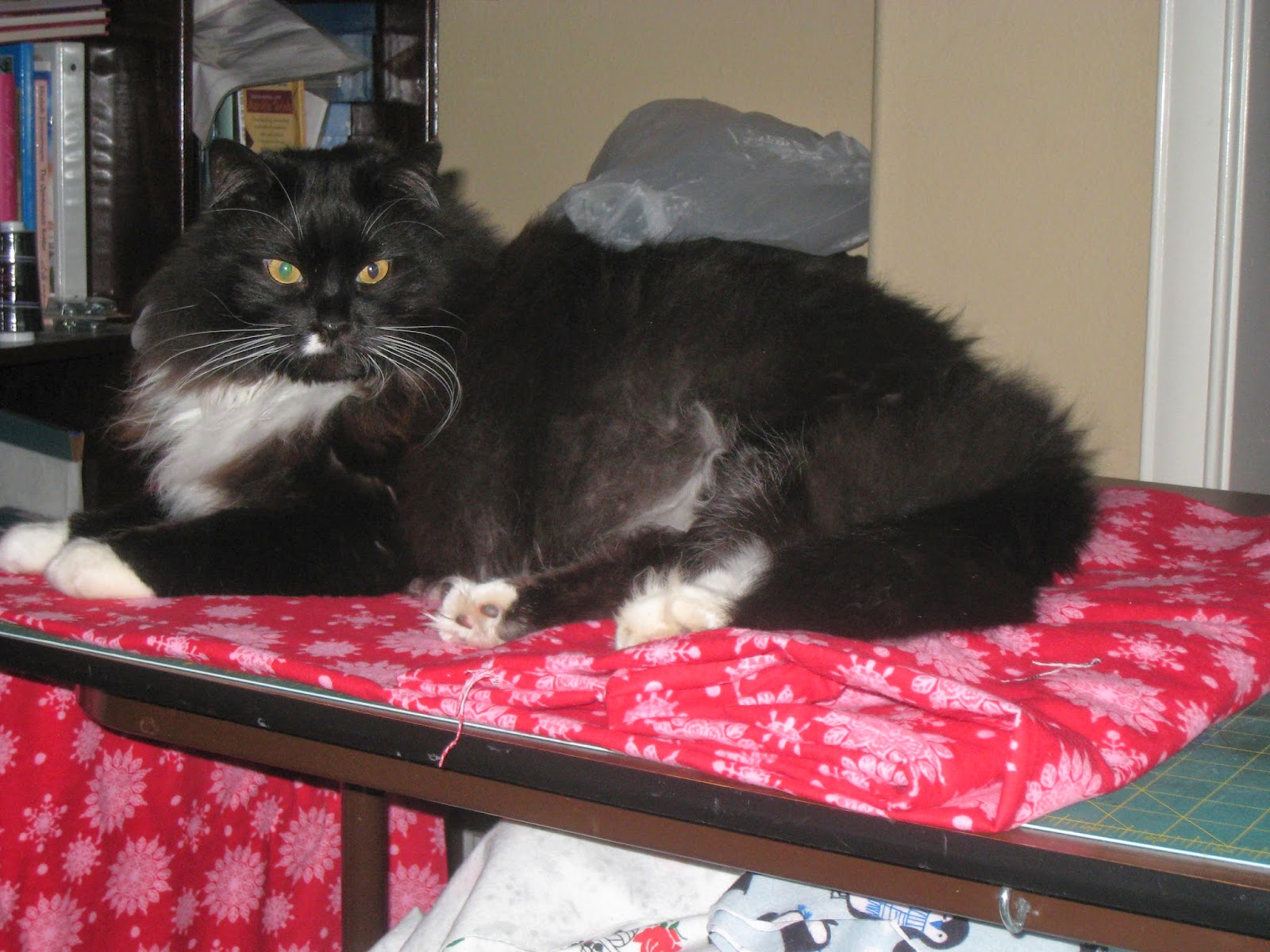 Undeterred, I decided to start the day with some icicle ornaments. 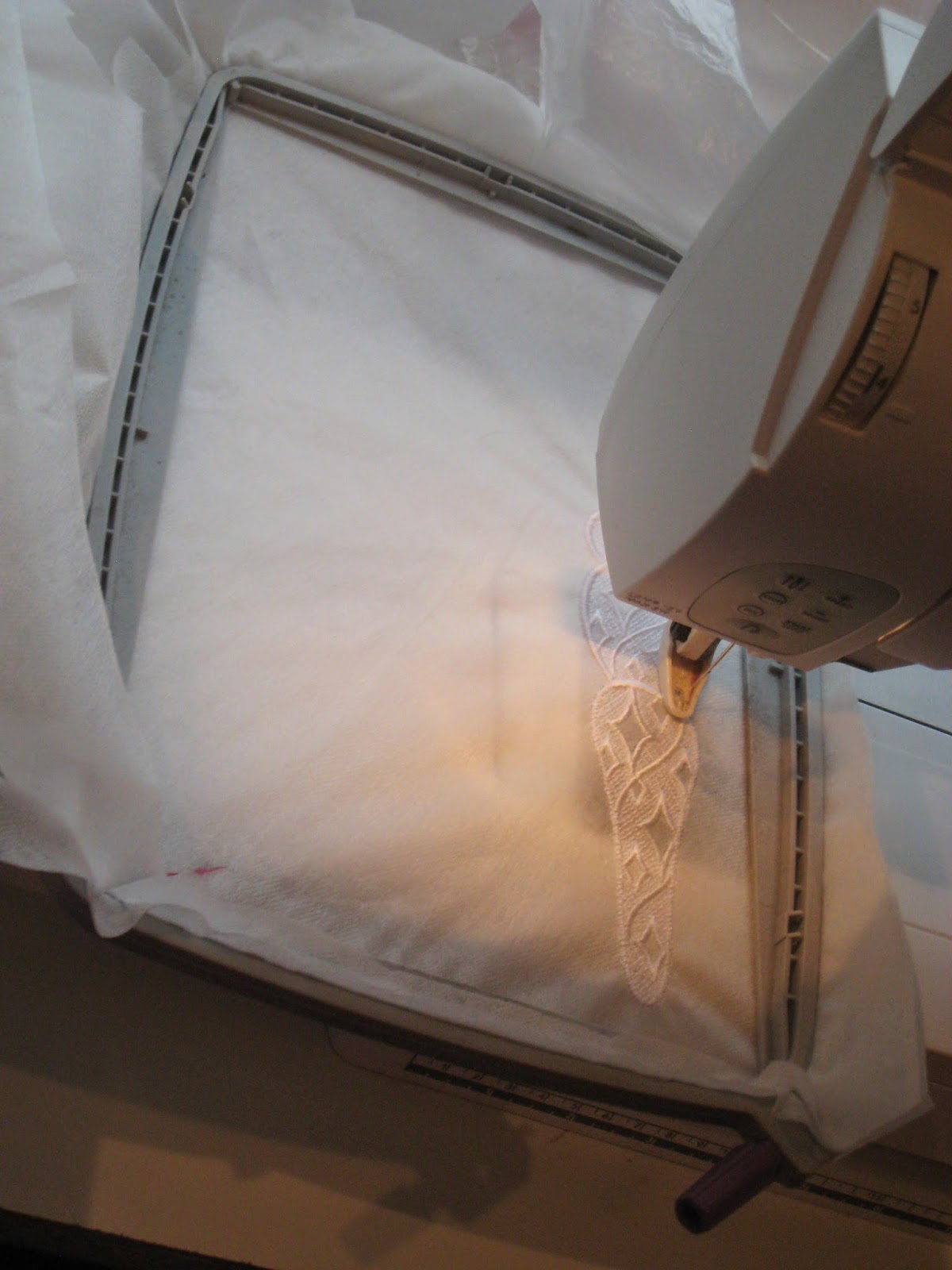 Though I've decided to not count any more of them for my 100 projects goal because the main goal this year is to clear up space and thread doesn't really take up any, I do love the icicles and love how they look on the tree.  Then it seemed a good idea to put away the ones I have just washed and dried, 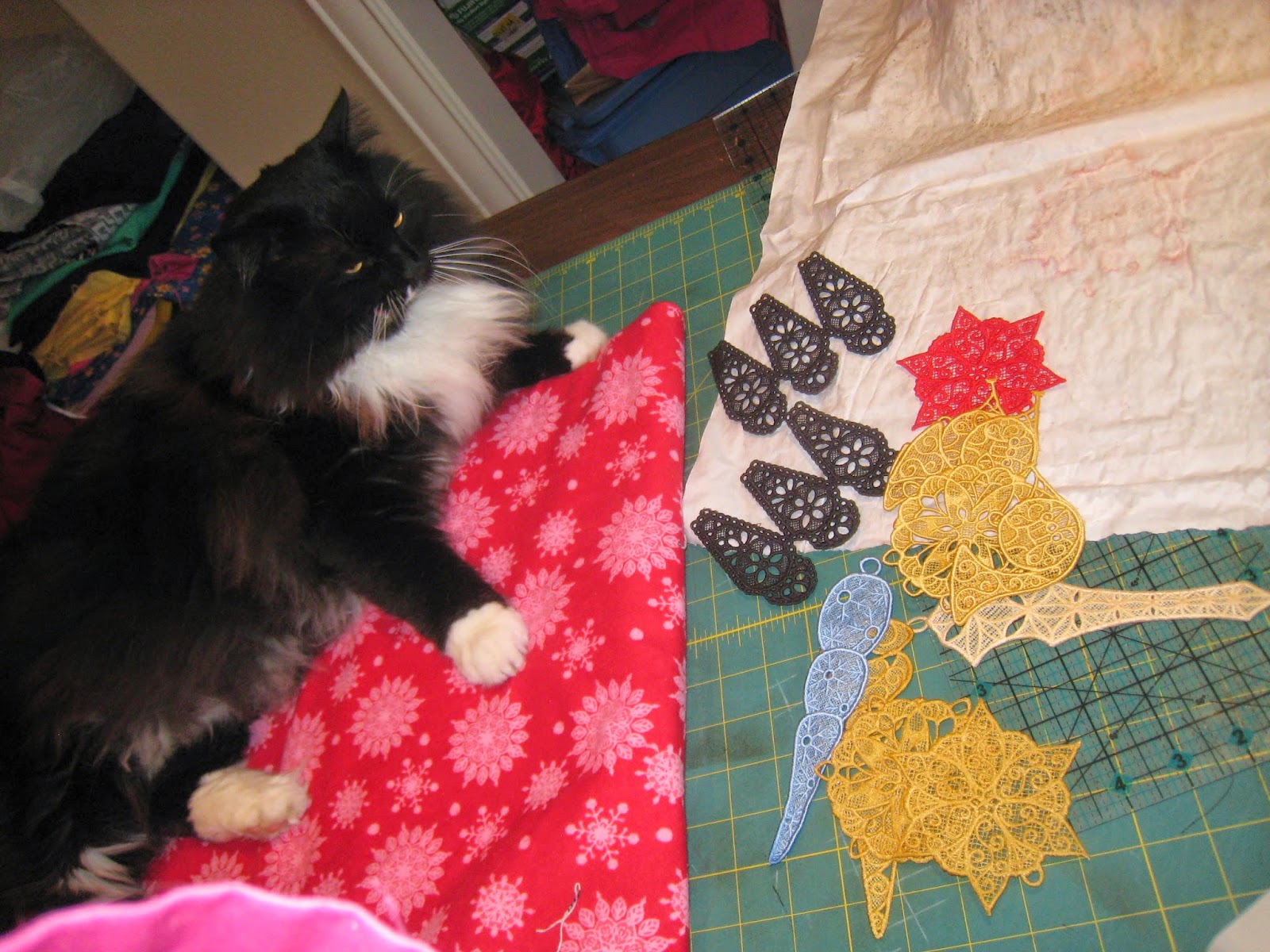 which Theo thought was a terrific idea as well--3 seconds after this picture was taken, he was chewing on the black one.  I did save the ornament, and after some armpit scritches, 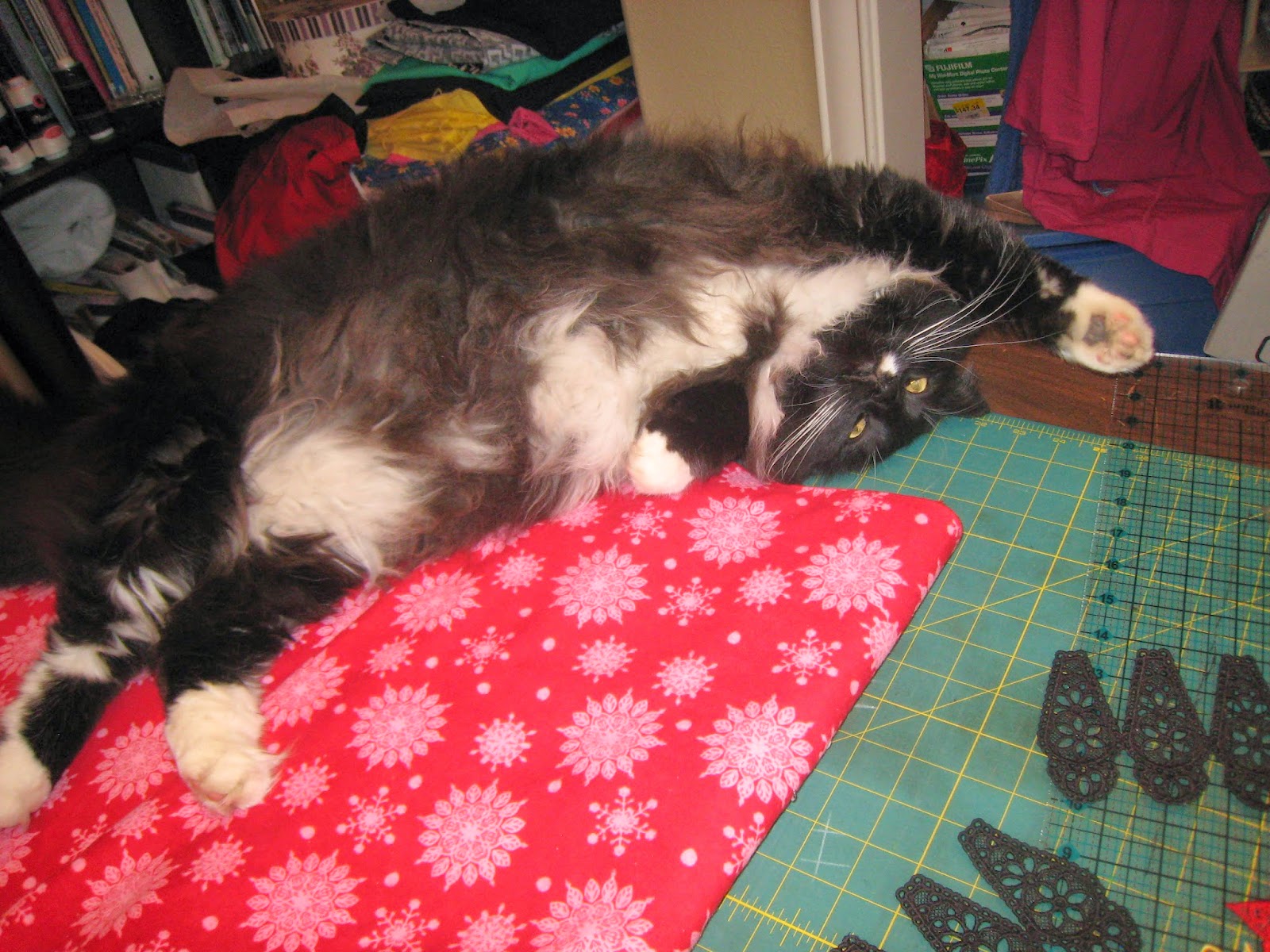 Theo had recovered from the shock of a screaming woman lunging at him. Some days it is awfully difficult to be a kitty. 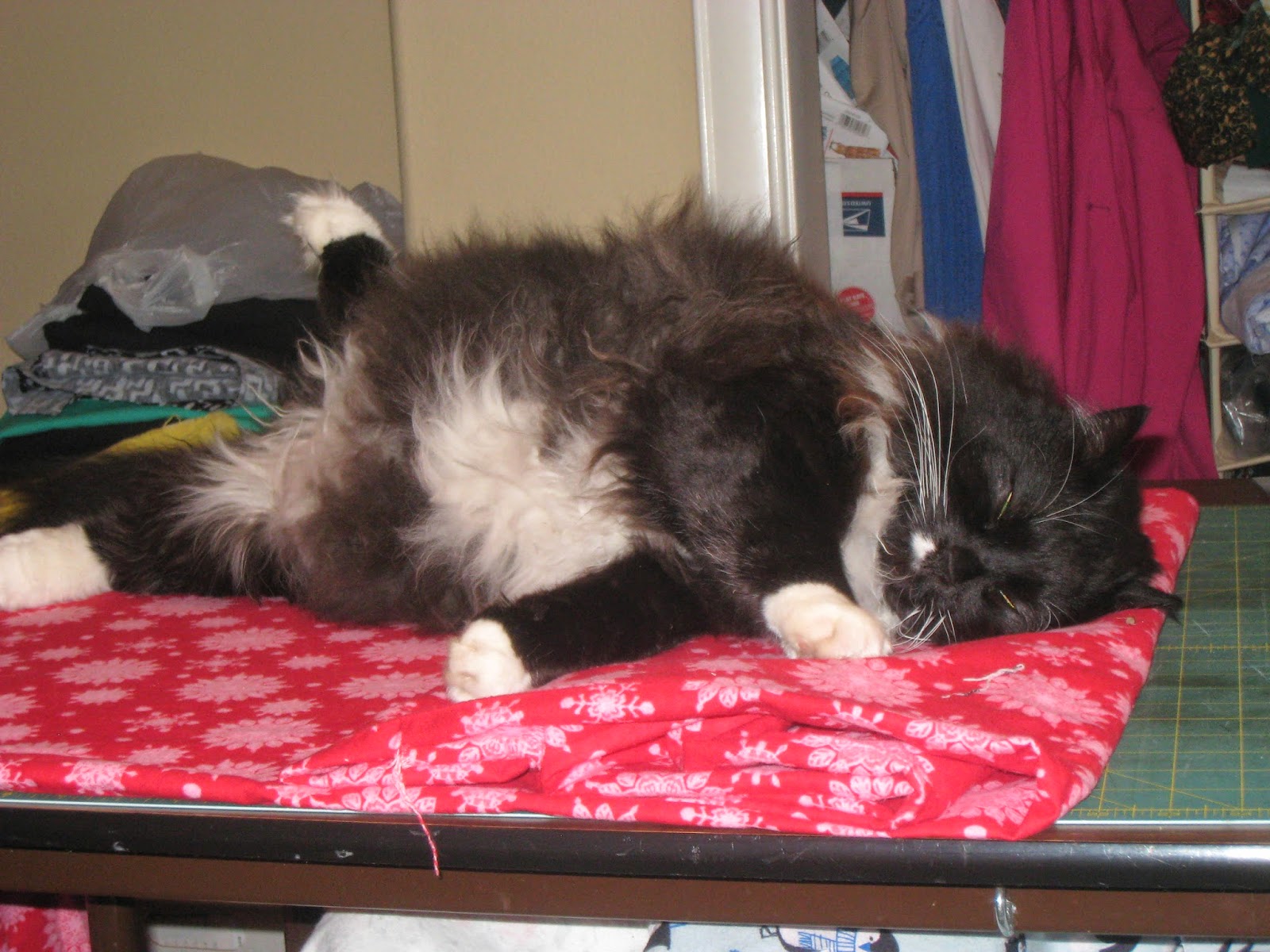 While he was safely snoozing, I washed more lace ornaments, 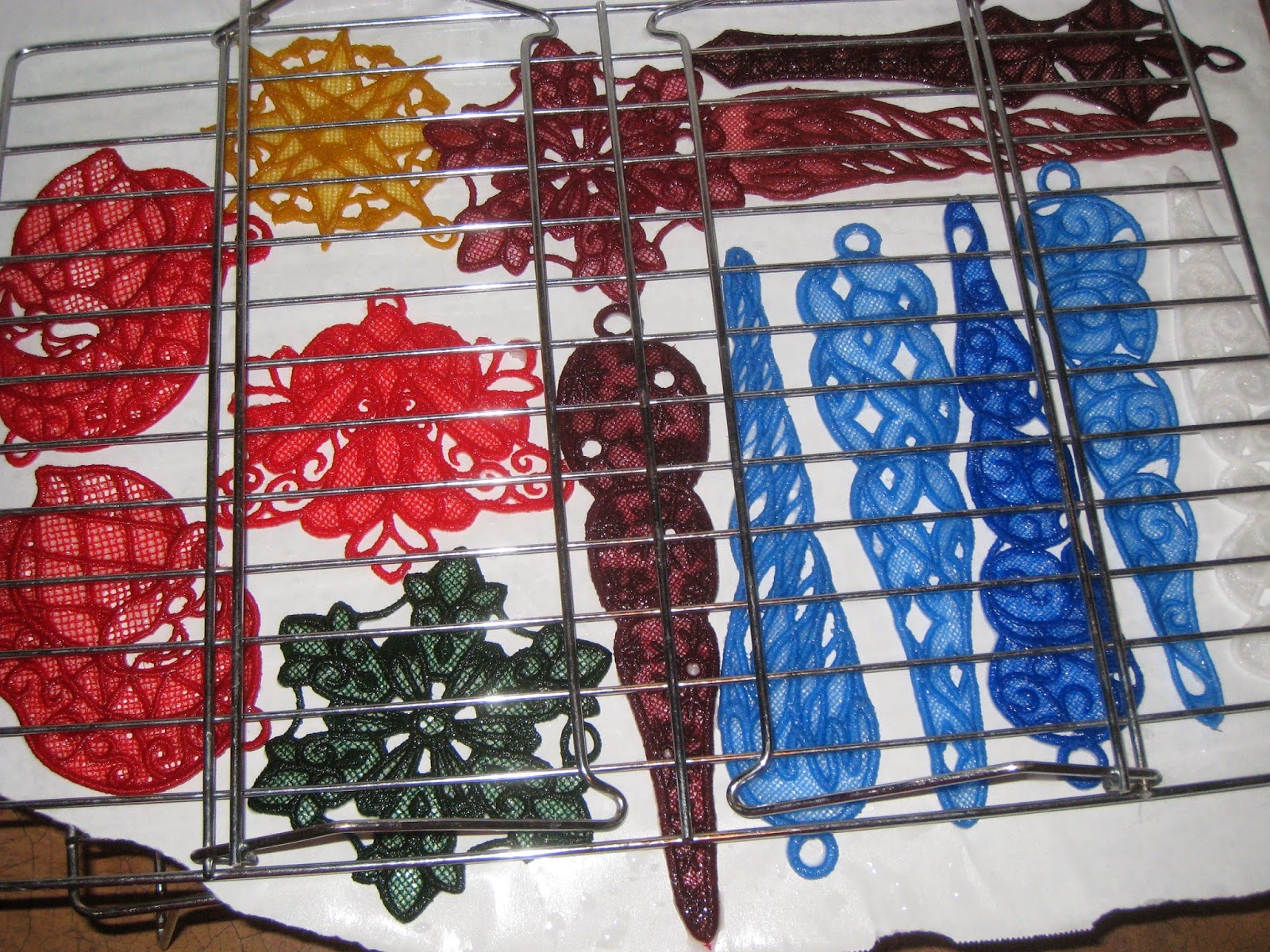 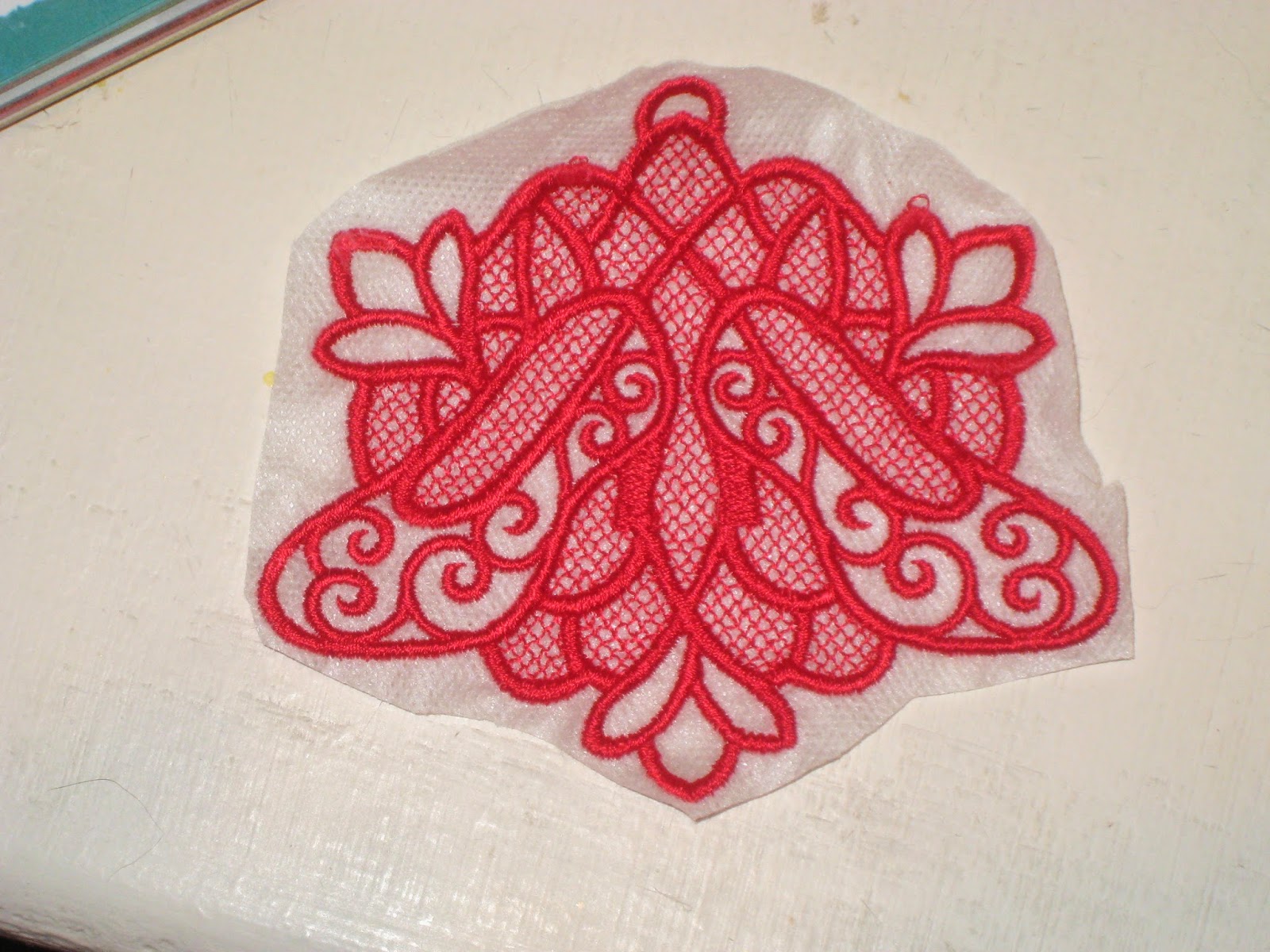 my least-favorite ornament.  Obviously, it's for the song "Christmas Shoes," which is one of the worst ear-worms of all time and which I am plagued with every time I even see this ornament, which would be enough to make my "worst songs" list all by itself, but I didn't care much for the song to begin with.  To me it's a silly premise and so over-the-top that it feels manipulative.  But I didn't want to not make any of the new ornaments, so I made one, and it will find a home with someone who likes that song and everyone will be happy.  In the meantime, 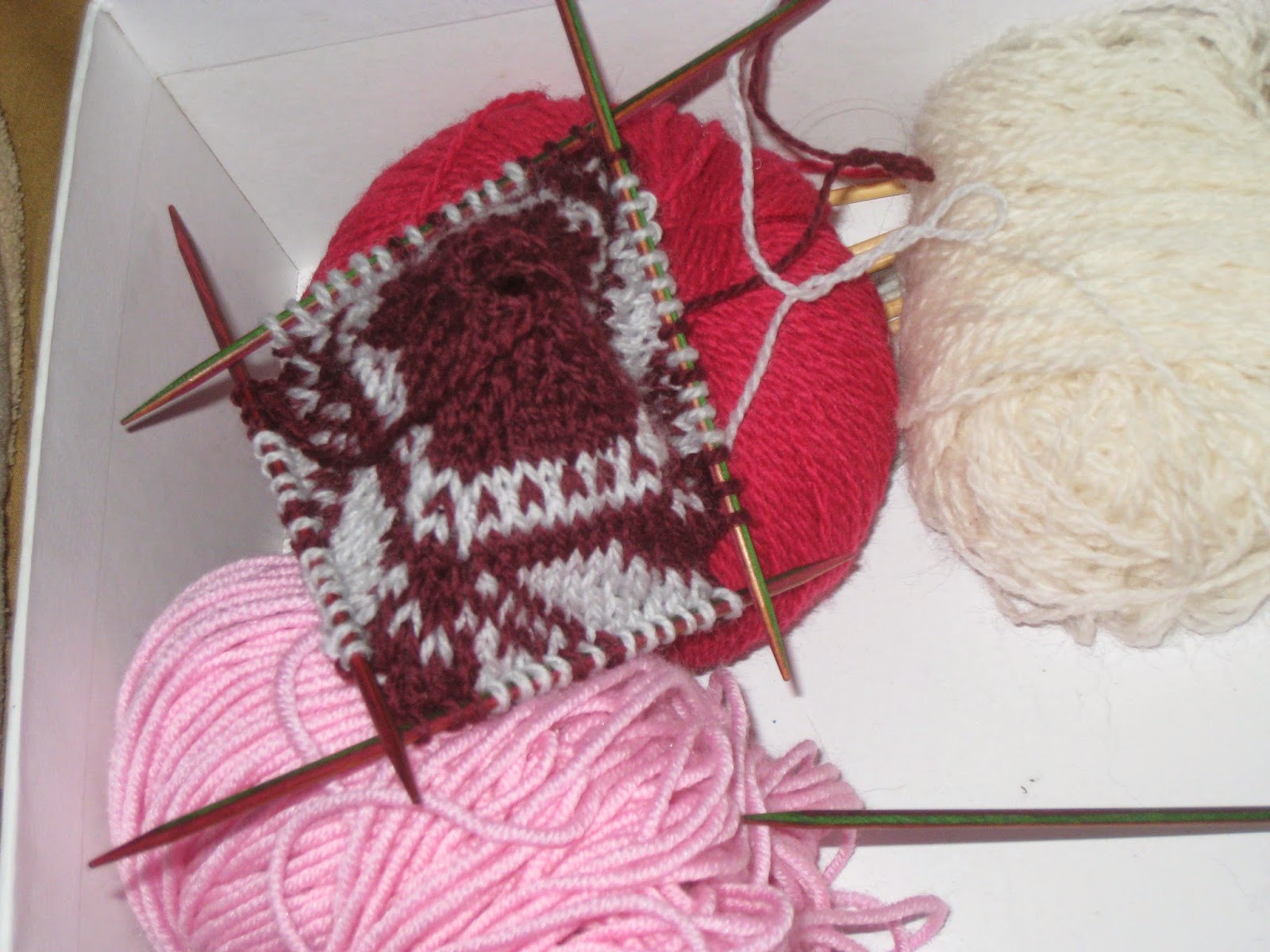 I did a few rounds on the latest colorwork ornament, which could actually be finished by the end of the month, 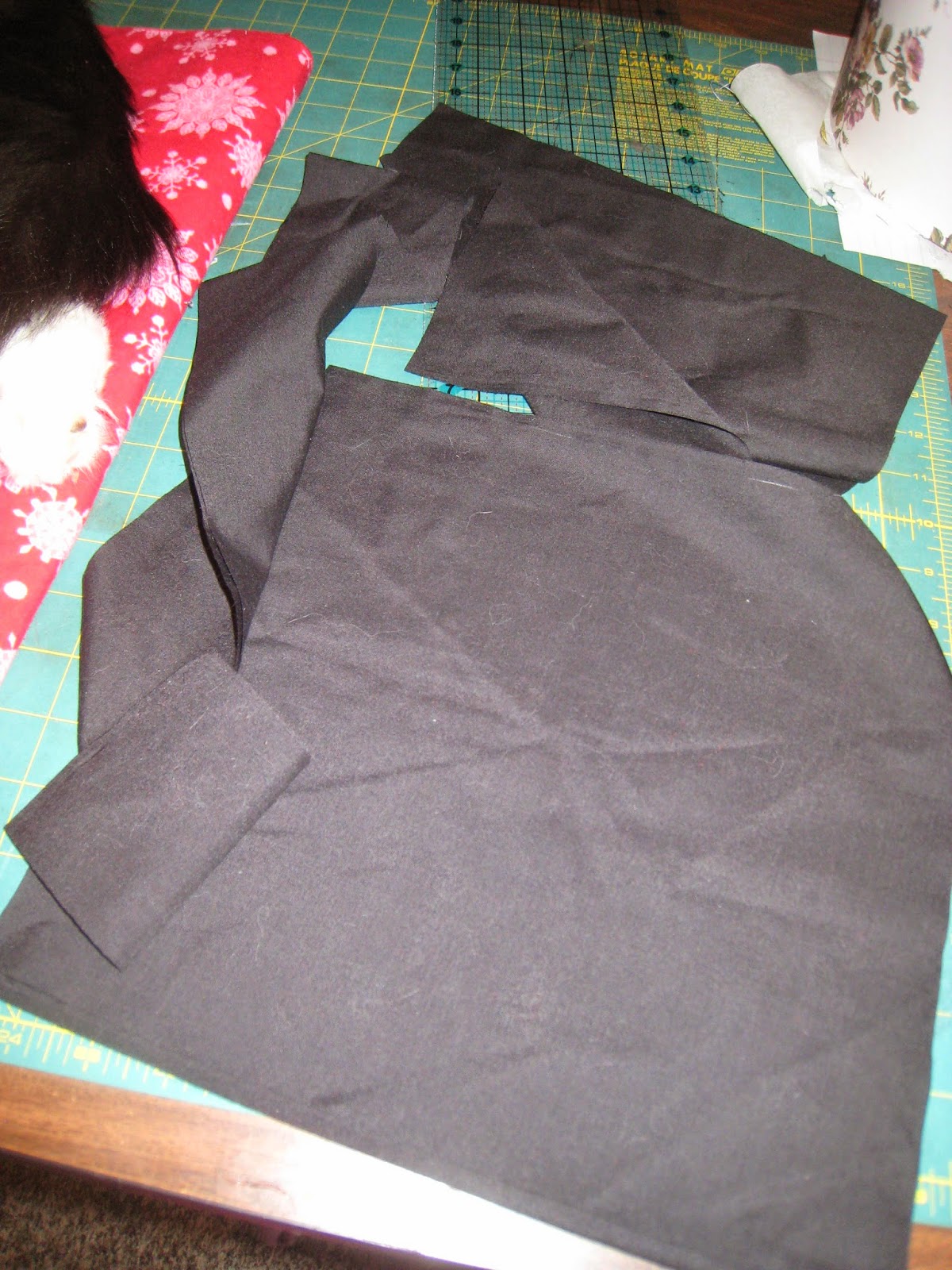 dug out the new Halloween bag that I cut out over the weekend, which Jeeves will be starting as soon as he finishes the icicles, and I have just finished one of my least-favorite parts of the jacket pattern, 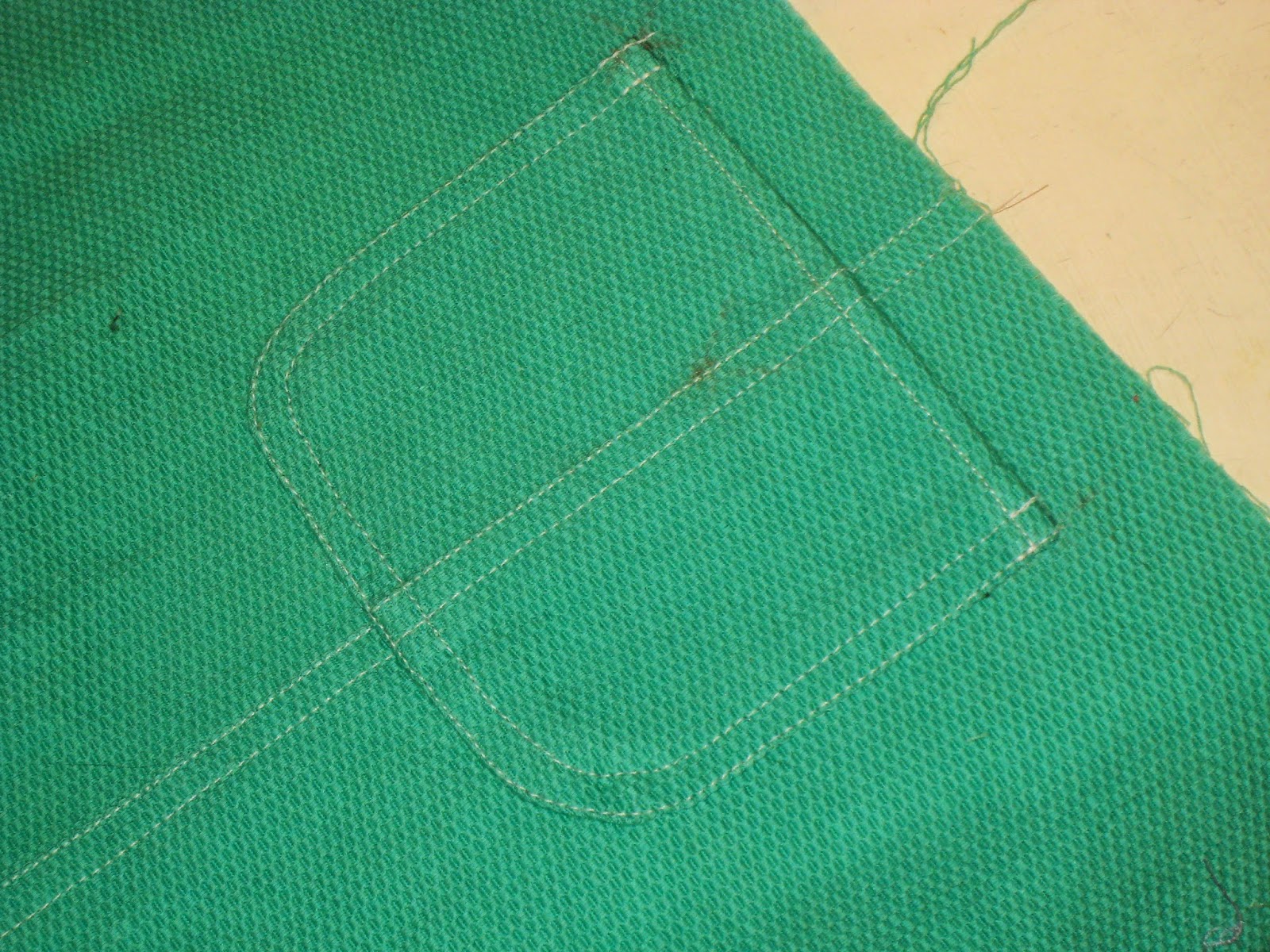 though a little fusible webbing makes the job much, much easier.  I was all set to move on to the next step of the jacket when I realized.......I need the table to cut out the interfacing pieces, so I am right back to where I started. 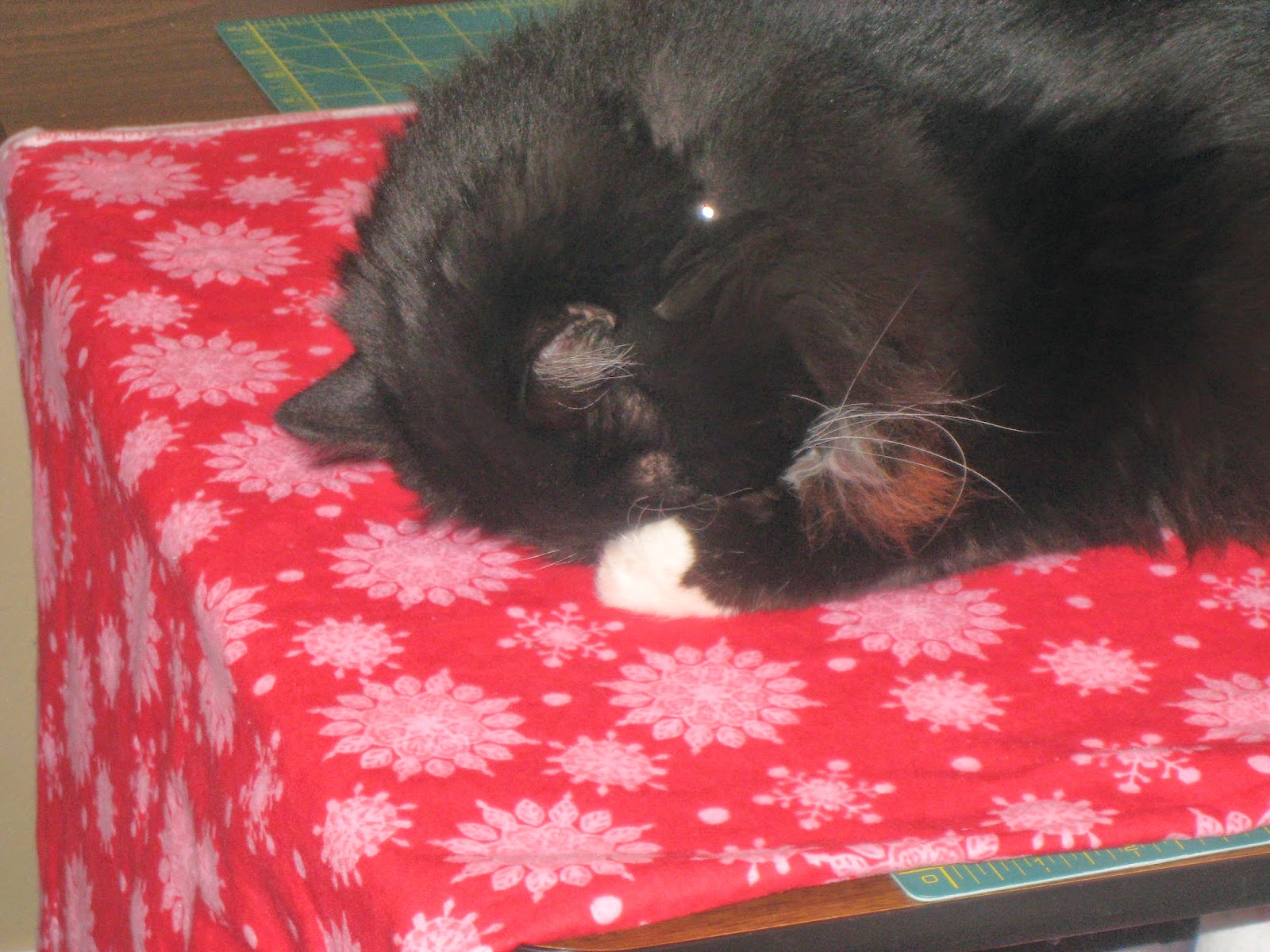