Since there will NEVER be a piece of fabric that big again that gets the thread/stippling treatment, yesterday I decided to make a project bag out of the big blue piece: 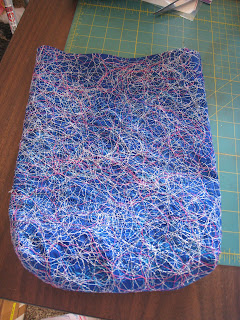 It will be interesting to see how it holds up.  On the one hand, it could snag on just about anything, but on the other hand with all the extra stitching, it is the strongest cotton bag in existence.  It still needs handles, but I had an idea for attaching some silver ribbon in the center of cotton handles--which would be an even cooler idea if I actually HAD some silver ribbon and wasn't on a buying-ban until November.  Another idea is to add decorative stitching in silver to the handles.......but I've run out of silver thread.  I thought I had some silver embroidery thread, but so far I haven't run across it.  I haven't lost hope, as the sewing room still needs some unpacking and a LOT of organizing, but for now this is "The-bag-which-shall-remain-handle-less."

I had sort of hoped it would contain my new fingering-weight ornament yarn stash: 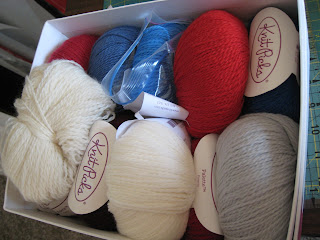 but obviously I have very little concept of volume.  Some days I get the feeling that there is a force-field at the door of the sewing room which stops any rational thought from entering.  It would, you know, explain a lot.

Not to let any grass grow under my feet, while I was sewing the bag together, Jeeves pumped out the three pieces for a 3-D gold ball ornament, 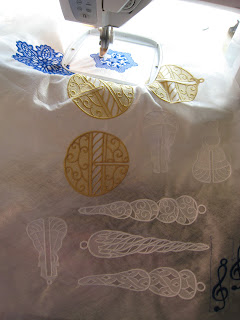 then we got to work on some blue snowflakes 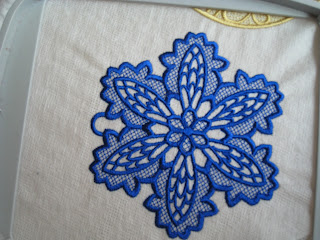 which are unrealistic but lovely.  I also sorted through my embroidery thread stash to see what colors I had duplicates of and which ones were a bit less prolific, and while I really love this particular color of blue, 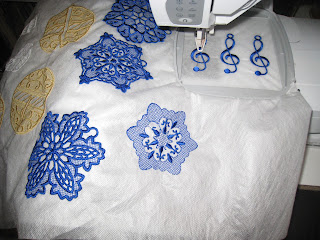 this is the last of it.  After another blue snowflake this morning, a half-finished snowflake where a big bobbin snarl put an end to the project, I decided to finish off the spool's last lace potential with 3 treble-clef ornaments.  It would be easier if I could look at the spool and say, "Oh, it has this far to go," but one thing I have noticed about expensive thread is that the spool itself is really fat to give one the illusion one is buying a lot of thread.  Luckily, there is a different blue in my stash as well, but I thought Jeeves could use a rest.

At some point in my manic fabric-acquiring zeal, I bought a packet of Christmas fat quarters involving a lime-green that wouldn't really work with any of my holiday color schemes.  I don't know what I was thinking, but they seemed like a great place to start in the Great Ornament Experiment.
it's days are numbered
I have seen some cool variations of this sort of idea (though minus the frills and gingham), and one of my crafting books actually had the directions, so I sliced all the fat quarters into 2.5-inch strips, 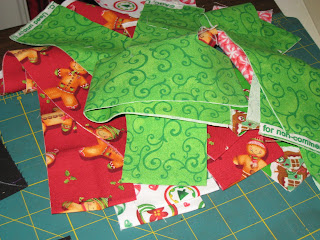 then (and this is where it would pay to read ahead), each of these strips was then cut into 1.5-inch blocks.  Those are tiny, tiny pieces, and 6 fat quarters can REALLY make a lot of them.

The directions--obviously written by someone who DIDN'T just create a couple hundred of these little pieces, said to fold down 1/4-inch on the "long" side of each rectangle and press.  I struggle with being able to accurately turn down 1/4 of an inch for hems at the best of times, and there is NO WAY I would make it through all of these without help, so I fired up the sewing machine, put on the 1/4-inch quilting foot with the built in guide, and basted all those little bits at the fold point: 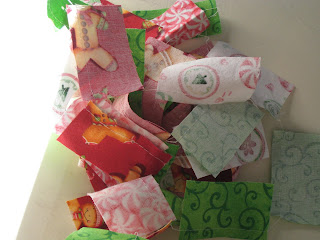 It means ripping out the thread from each piece later, but ripping is better than measuring.

The next step in the directions in this book which is in dire peril of being donated to the library shortly was to MARK the center of ever single little piece, then fold the hemmed side up to that line to form two points.  Ironing the little rectangles in half is much faster and less likely to make me drink, so I spent a large chunk of my afternoon at the ironing board.  Where I'll also be tomorrow...... 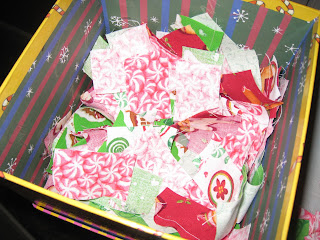 After a while I just wanted to see what one of these might look like, so even though I have SCADS of little bits still to iron, I looked for the next step:  hand stitching the points down on every single triangle.  This is where being an irrational sewing gadget and notion shopper finally came to my rescue, as I have a delightful little tomato dispenser of strips of fusible web, so I fused the little devils in place.  This book was written for a much more patient person than me--obviously.

By this point, I needed to rest my back (and this book and I needed serious time apart), but tonight I did pop into the sewing room to see if I could get an idea of how the ornaments were turning out.

Luckily, when I'd marked the underlayer earlier I had used chalk instead of one of the disappearing markers, which always wear off FAR faster than I quilt, 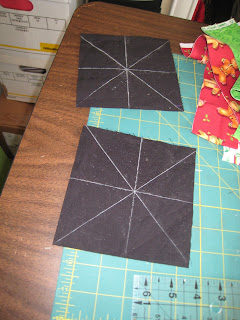 so I could at least get an idea of which patterns I wanted to go where. 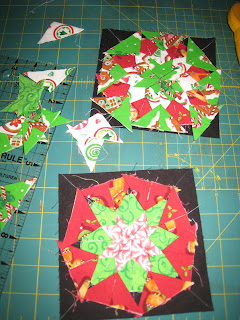 It was a little disheartening to find out that after all my efforts, I only had enough finished triangles to lay out one ornament fully, so 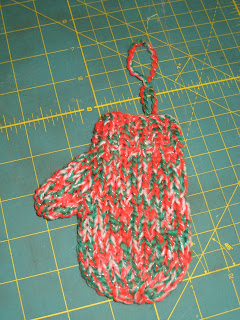