Thanks to making a mistake that set my progress back last night, I was up until 2:00 AM this morning finishing the soup.  The good news is that if I get a cold from the lack of sleep involved in making chicken soup, at least I now have chicken soup to eat while having a cold.

So, I've been a bit tired today and have made several mistakes, so the stockings aren't nearly as far along as I had hoped, but at least I now have the tree motif done. 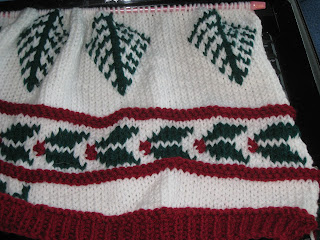 I'm really pleased with how they are turning out, and I'm hoping I'm taking enough notes to be able to recreate them at a future date.  I think I'll do another holly leaf set before working the heel, but I haven't decided about the foot yet.  I tend to lean toward plain feet, but that might look a bit plain.  Maybe a holly motif of some sort?