And I'm Off The Sheep!

Yesterday I received an email from my favorite online yarn store saying they were changing their business model and would be selling through Amazon now, and that any outstanding credits not used by November would be lost.  I have had a $50 credit there that I've been watching carefully.  Had I known that I was going to try for 2 years without buying yarn, I would have used it before starting, but I wasn't sure I could make it even a YEAR of stone-cold sheeping.  In all fairness, I could have waited until November 1 and hoped that something I wanted was left, but I didn't want to be buying yarn just to buy yarn (when did THAT happen?), and they are my source for the yarn for chemo caps, and they've been changing their yarn lines and I'm not sure that one will make the cut.  So yesterday morning I used my credit to resupply for chemo caps, and ended my not-buying -yarn streak at:

Oddly, I'm not as upset at missing the 2-year badge as one might think.  I'd really debated about going on after the gold badge because I knew I needed to use the credit soon, so the extra time was just a bonus.  AND I have enough yarn to try again, though I'm going to wait a little before starting.  Since I'm off the sheep, there are a few things I actually need.  Such as, 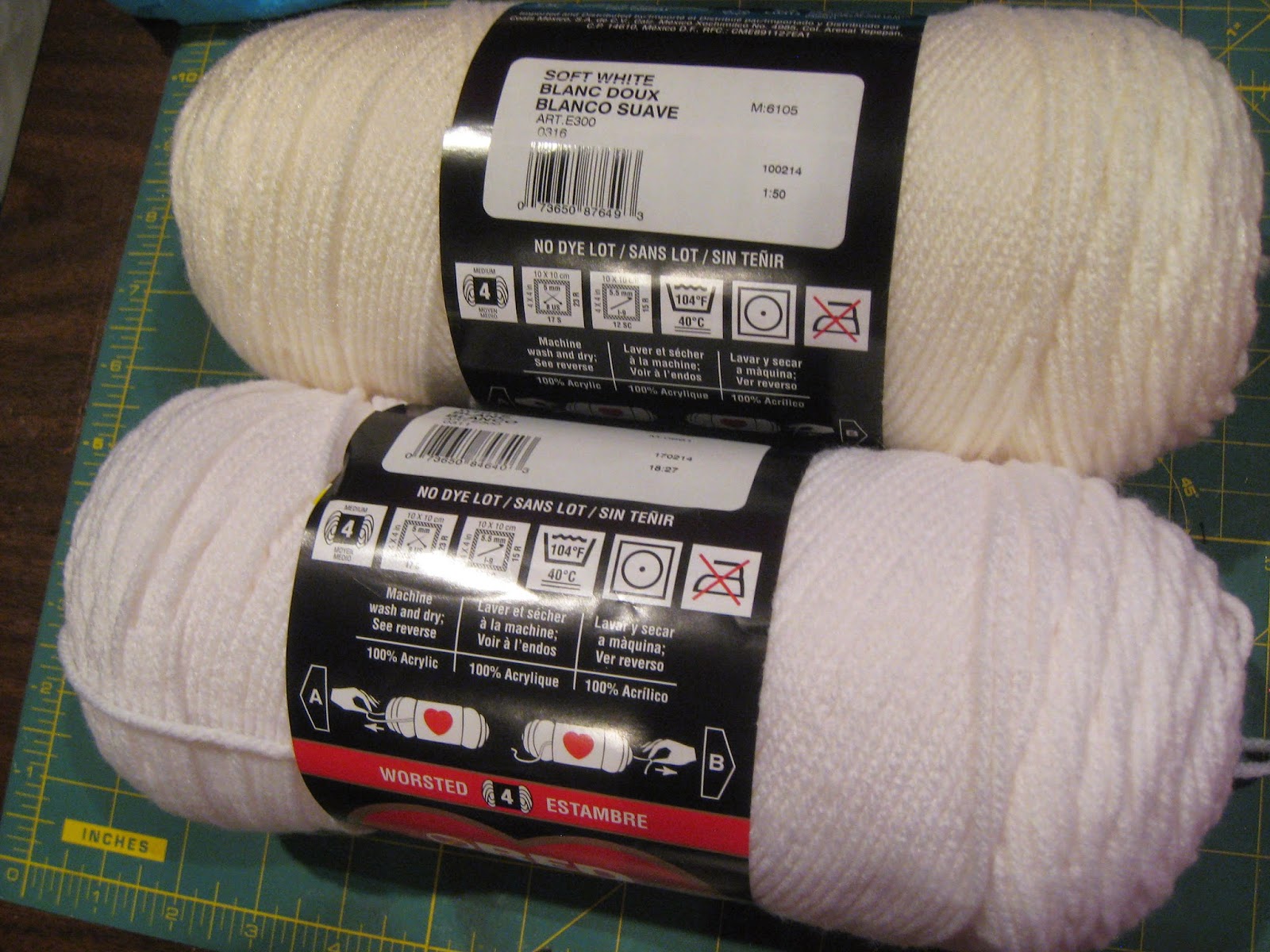 White and off-white cheap Red Heart acrylic.  Can you believe it?  The last Mr. Flurry used up my last white acrylic yarn, and while I was certainly not going to break a streak for that, I do like to have it on hand.  And, since it's the new fad, I did pick up a skein of the new ruffle yarns, 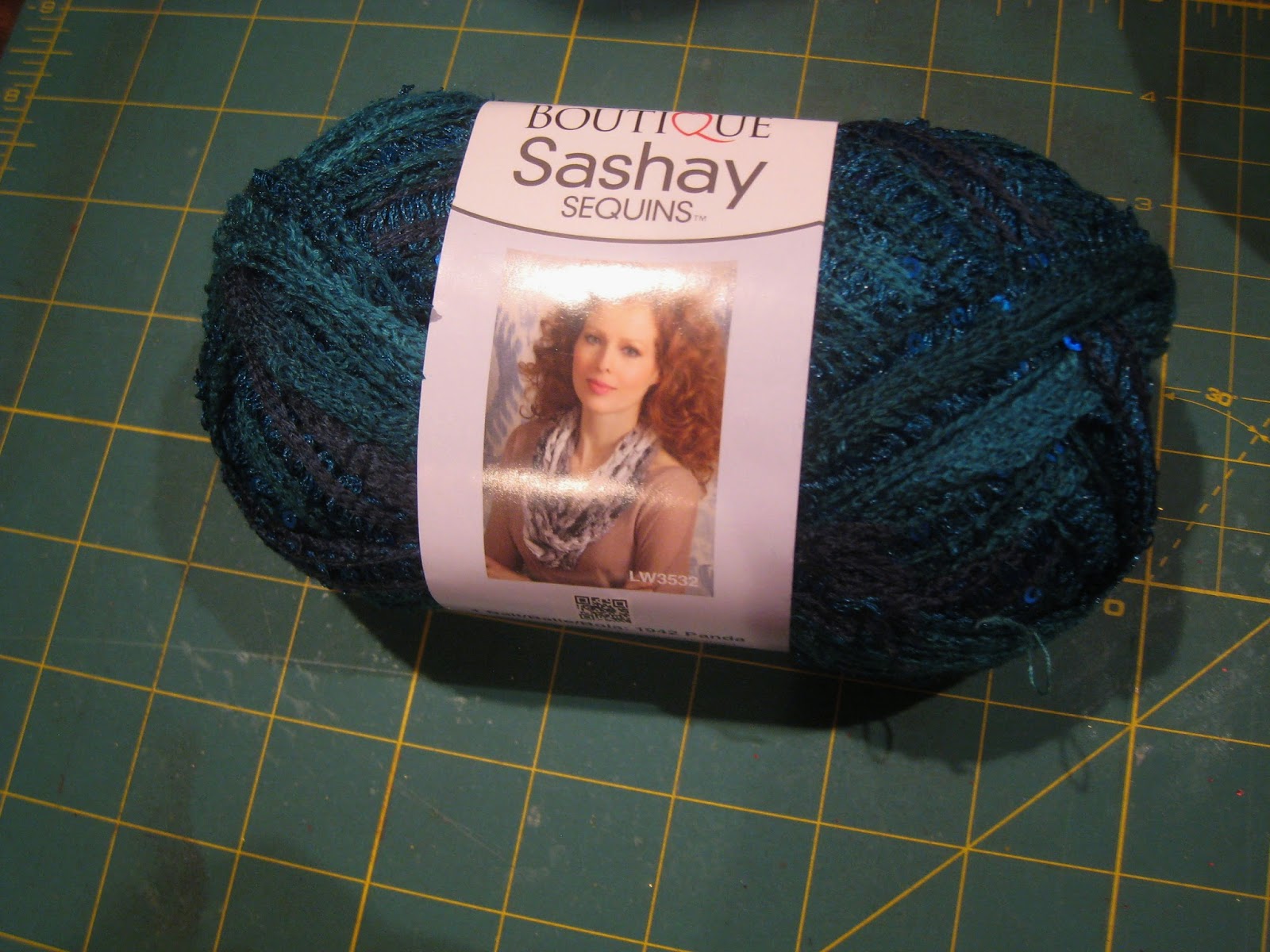 I'm sure it's the new Fun Fur, but I did have to try that back in the day as well.  And, perhaps the Cold Sheeping has taught me something after all, because I ended up with a stash of Fun Fur when it was big.  It was even on sale and I only bought one skein of this stuff to try.  Could that be a sign of maturity about yarn finally? 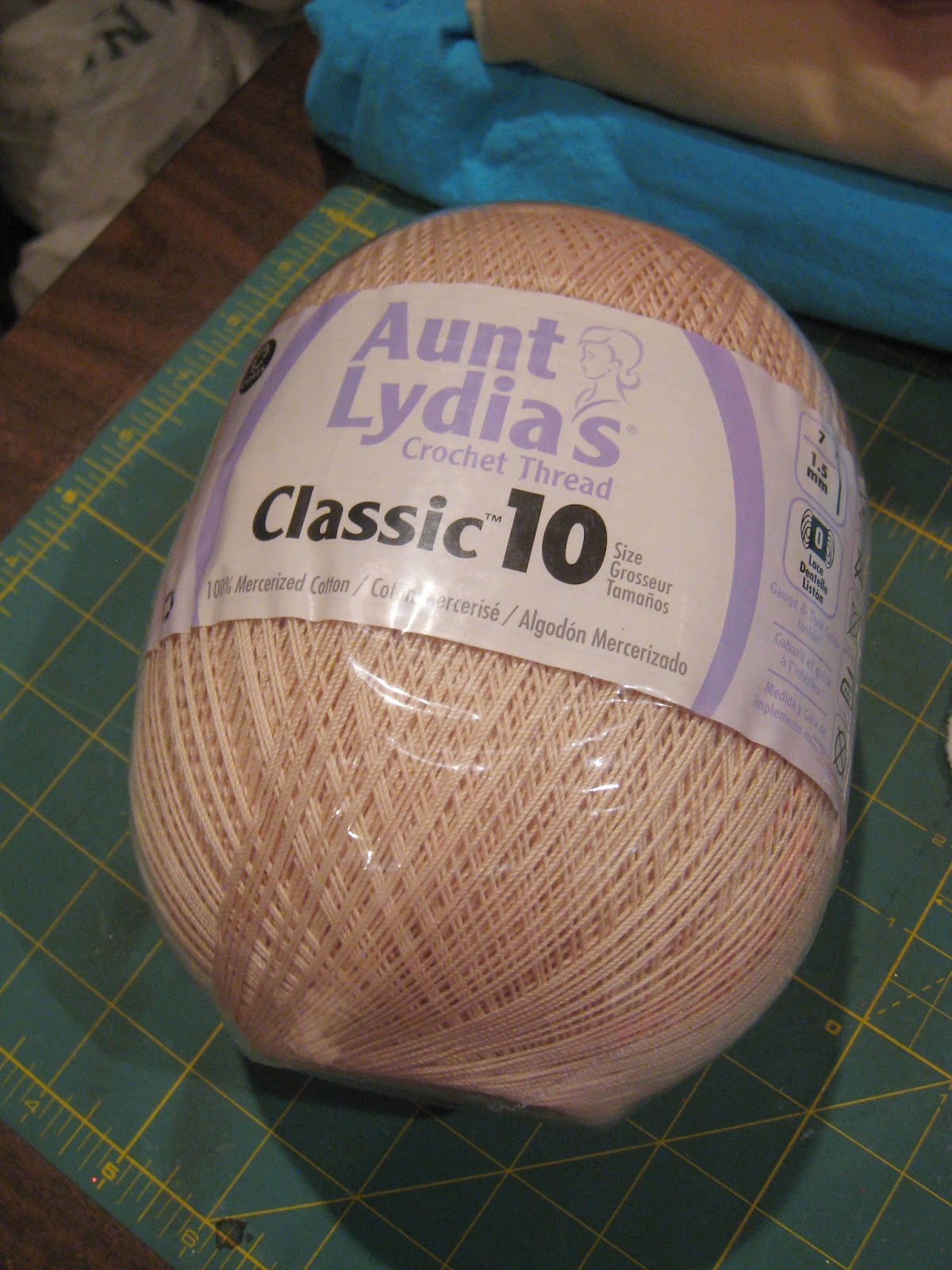 a 2730-yard monster ball of crochet cotton in "natural."  All my life I've wanted to knit a tablecloth, so now I'm going to.  I hadn't decided if I wanted it in the tiny stuff or wanted to use up the larger stuff I'd purchased years ago for an earlier attempt, but now I've decided that I'll use the bigger stuff to make a lace Christmas tree garland and use this stuff for the tablecloth. 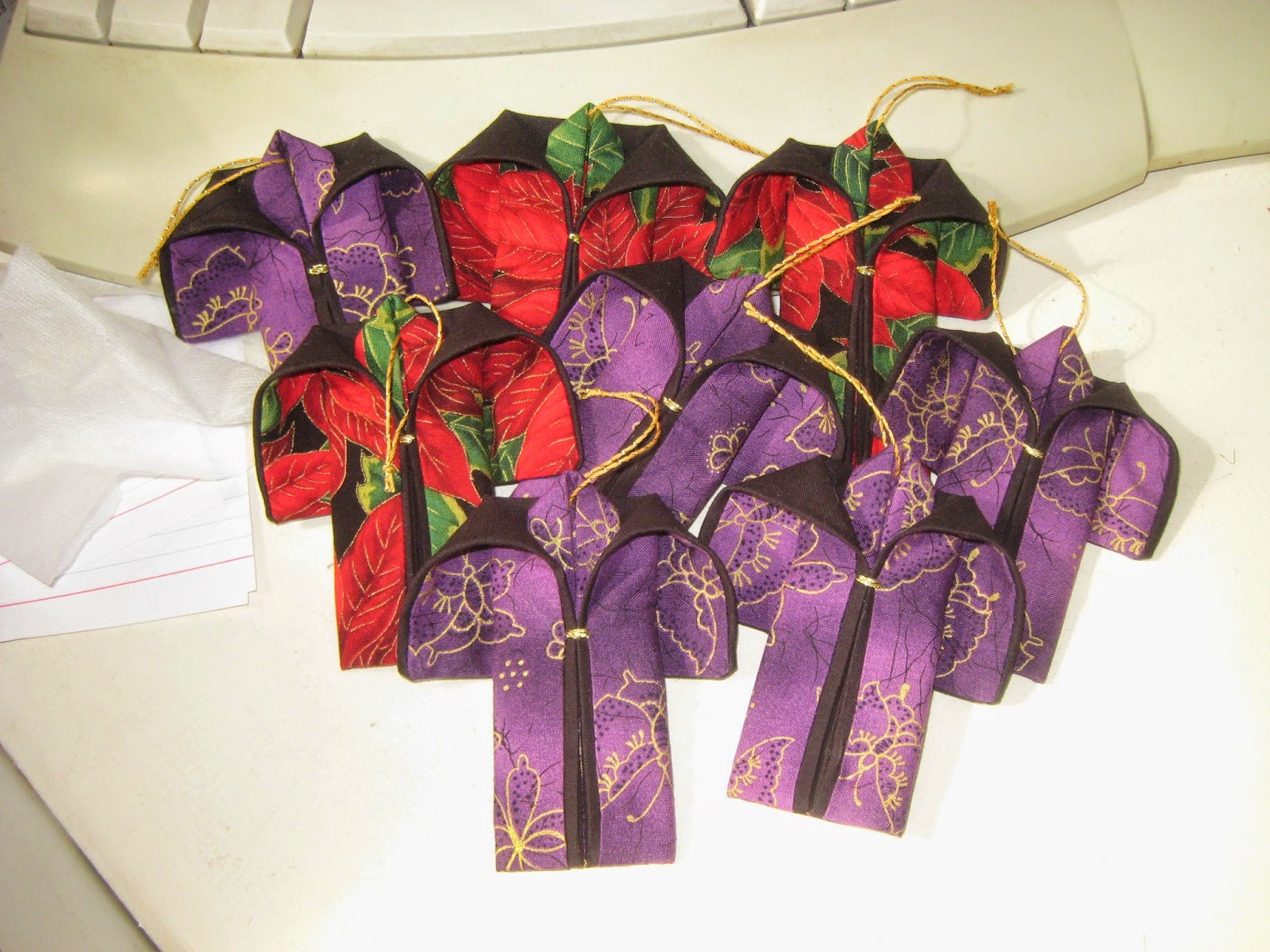 which I'm obviously enjoying AND using up fabric.

In other news, I had a great birthday on Saturday.  I even had a real Finishing Friday, so 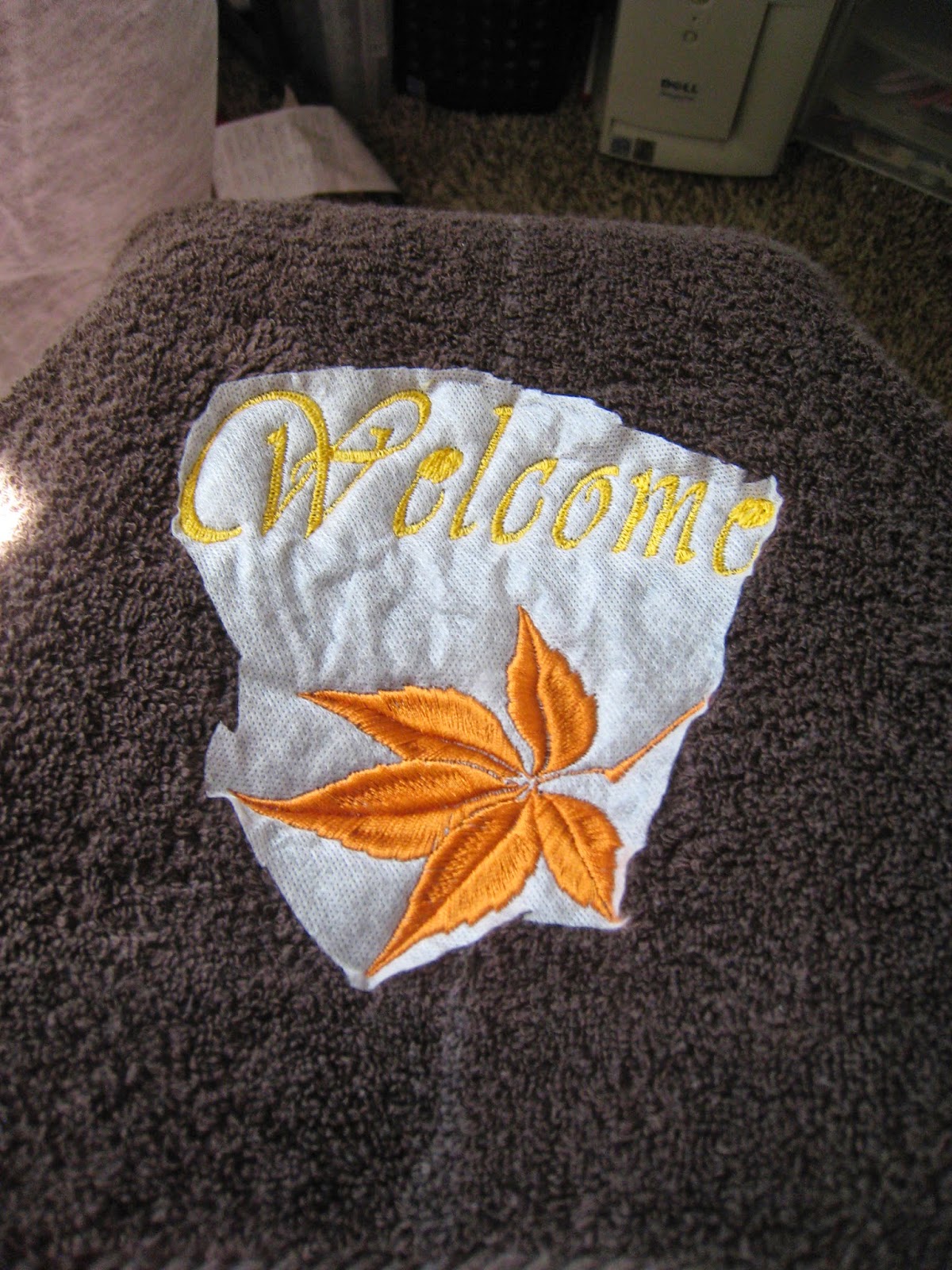 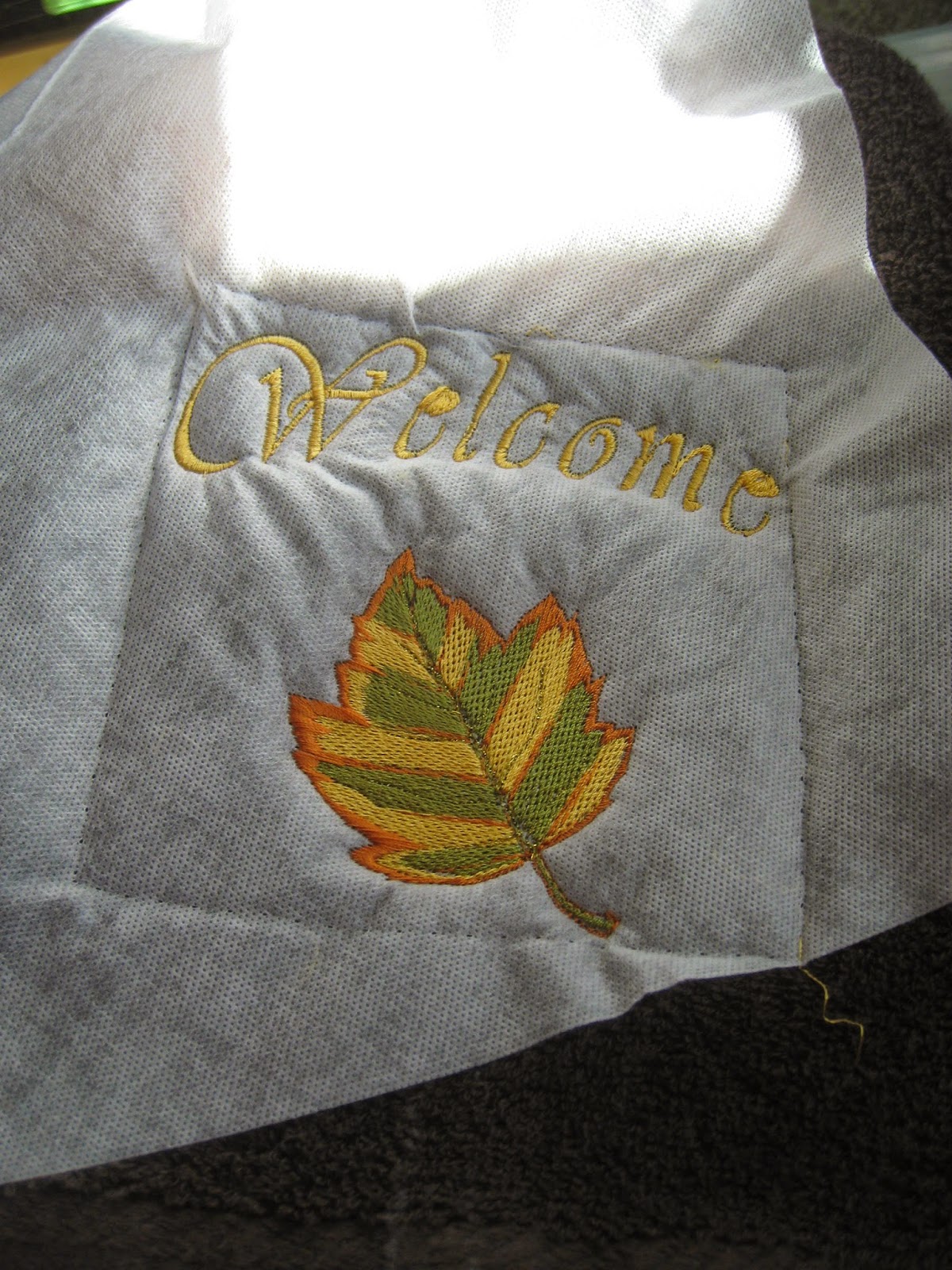 I designed and embroidered fall towels for the downstairs bathroom.  I had every season but fall.  Have I mentioned lately how glad I am I bought that thread chest?  While the towels were in progress, I laid out the labels for some Santa Bags I want to make: 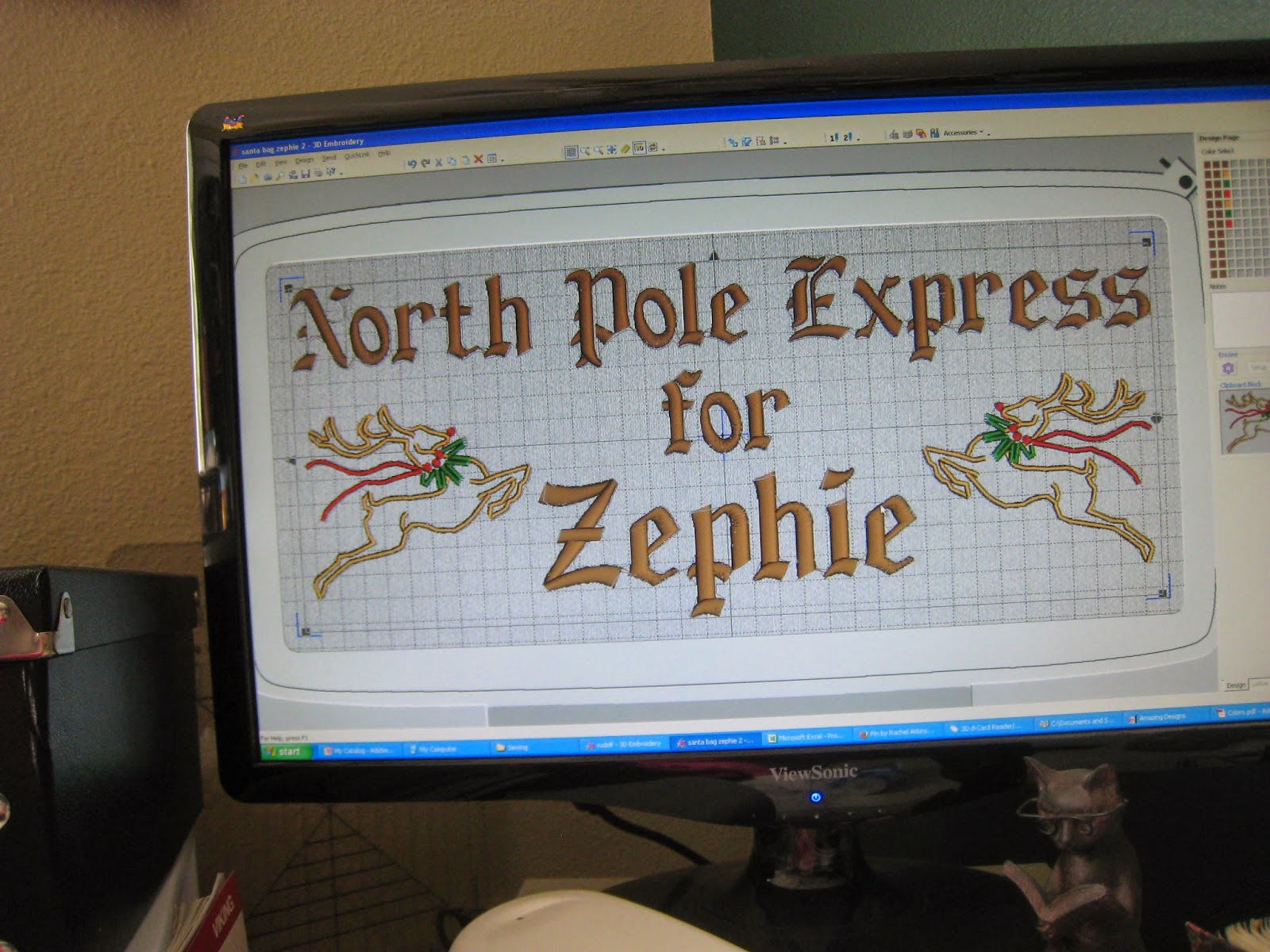 I want to add something like "Elf manufacturing, North Pole" or something to that effect, and maybe "Do not open until December 25."  There are some really cute versions on Etsy, but I don't have digitizing capability, so I can't make designs--I can only combine things.  But I think they'll be fun.  I'm going to make them out of red and white felt, I think.  I want them to be sturdy enough to be used and, frankly, use up something in stash.  :)

Saturday morning I opened up my birthday box I packed last year, and found a book 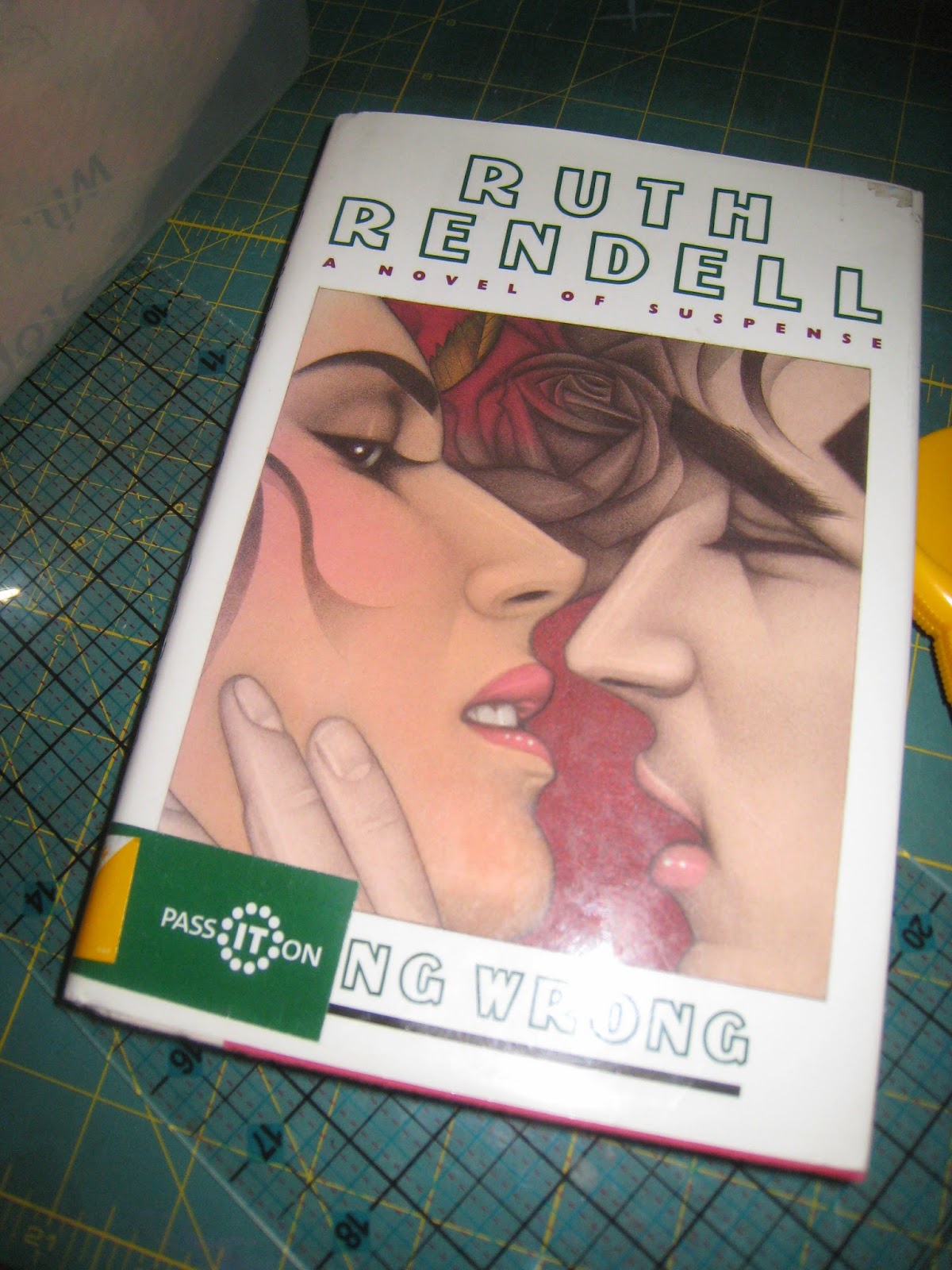 which I didn't remember buying.  It's used, and until this year I've always considered Ruth Rendell a safe bet as I like her mysteries, but the last book of hers I listened to, The Bridesmaid, was a huge slog to get through and not anything I enjoyed.  So, let's hope for better.  Speaking of better, the yarn in the box was 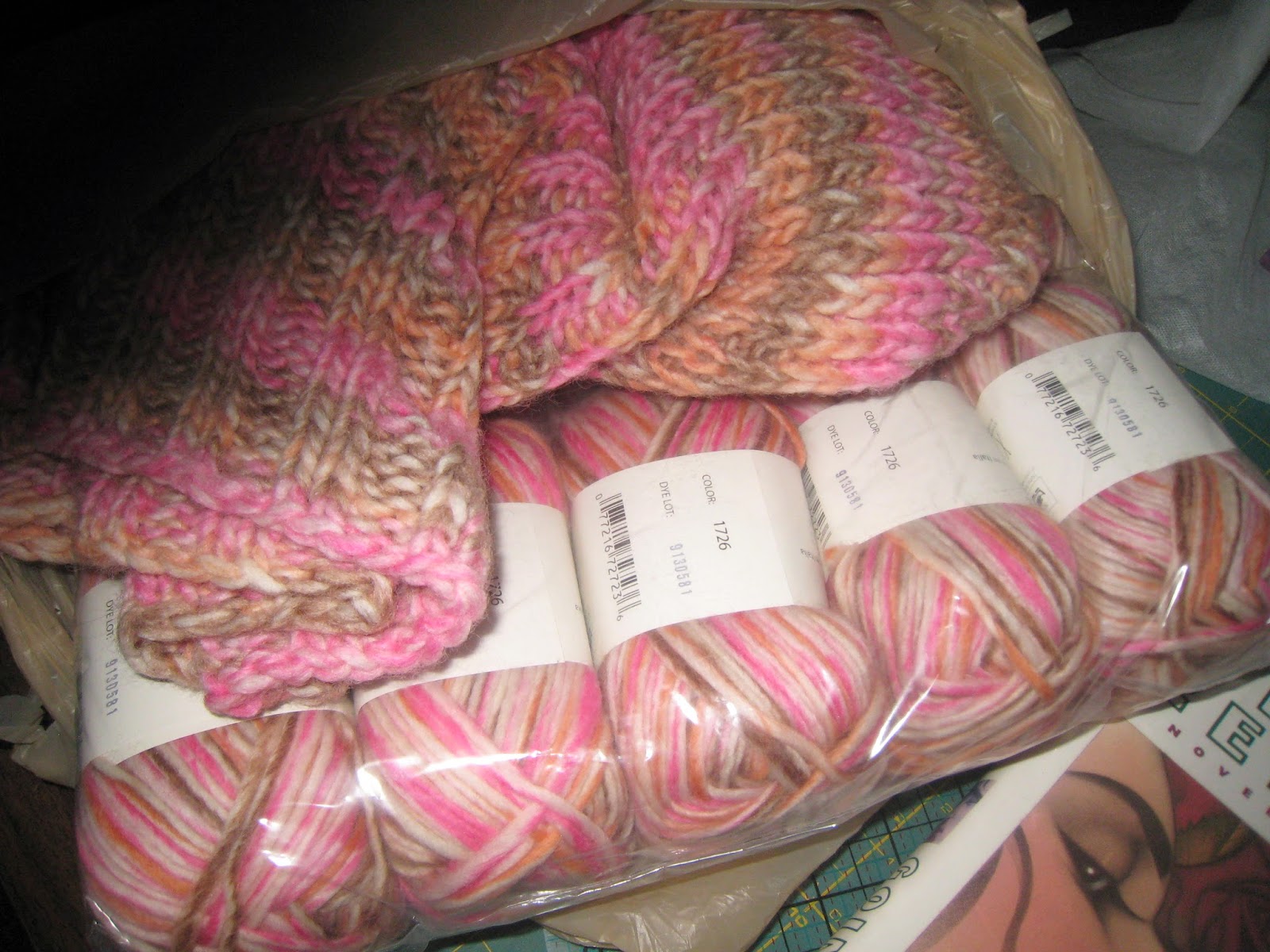 To celebrate our 100-projects-finished year in 2010, RobinH sent me 5 skeins of this lovely squishy yarn, which I made into a shrug.  Later, I found an entire bag of this available on Little Knits on sale and snagged it.  Wearing the shrug always made me think it would be a really great sweater, and now it's going to be.  I meant to cast on immediately, but Andy was arranging a party for that night and my parents came down for a late celebration on Sunday, so there wasn't really any knitting time.  I did, however, 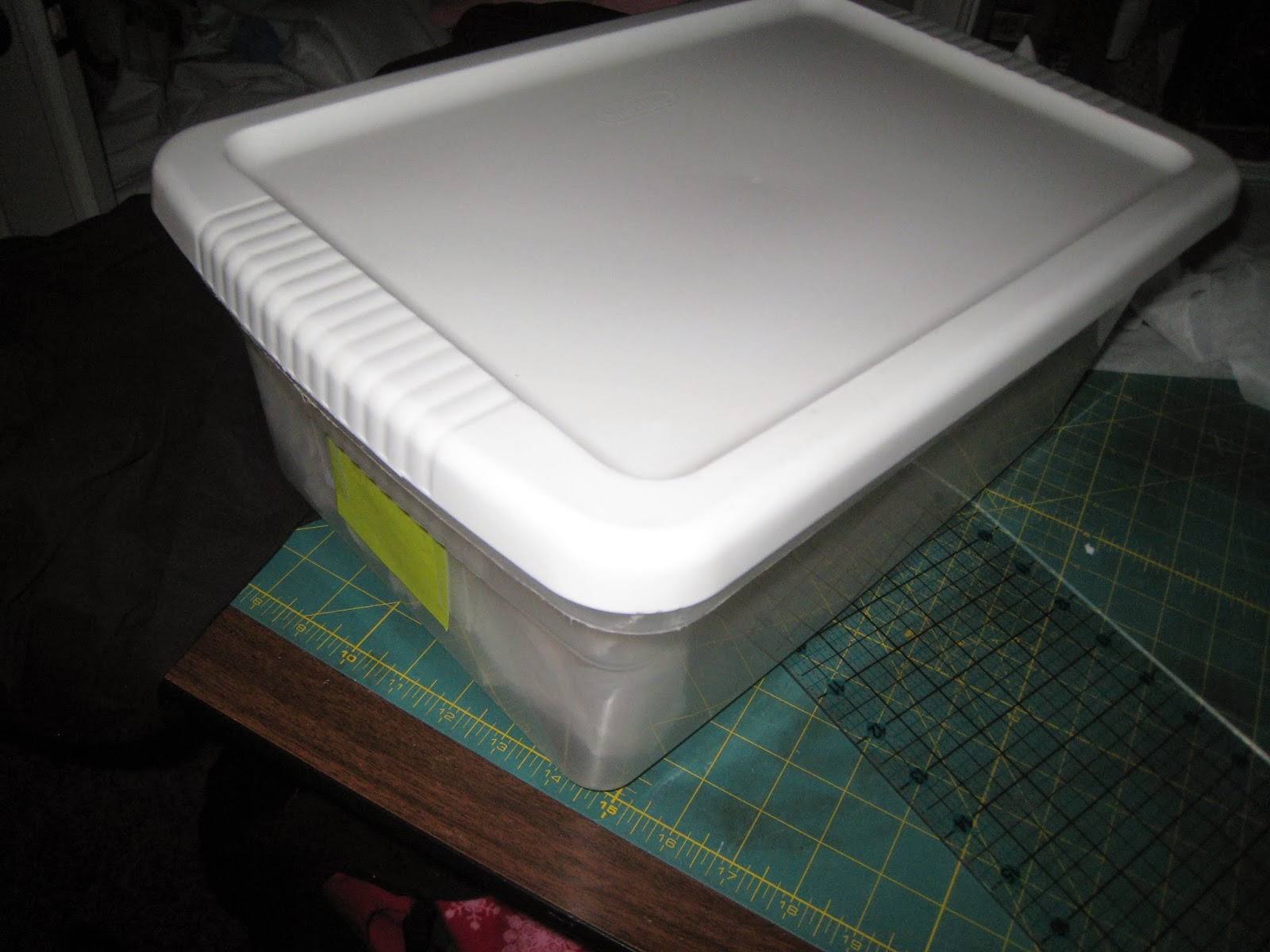