We woke up to snow again today, 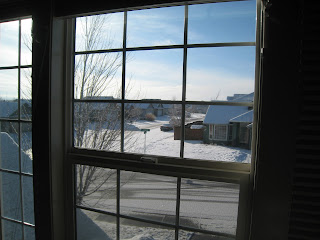 but the sort that melts off quickly, and as it's the first sunny day in a bit, it actually feels a bit like spring.  So, 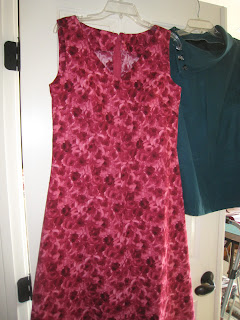 I have finished the summer dress for Finishing Friday.  This gives me almost 18 yards of fabric used for the year so far, and I'd like to say that it makes a noticeable difference in my stash, but.........It does however make a noticeable addition to my wardrobe.  I wore the new dress last night, and I've worn the micro-suede pants and collarless shirt already.  The summer dress might be just a tad bit early, but it will be fun to have a new summer dress.

I haven't forgotten my ornament goal, and made 3 new ivory icicle ornaments today: 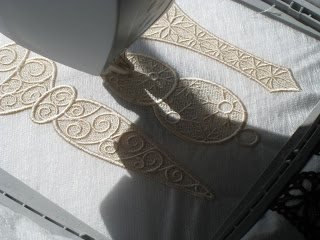 Looks like there aren't going to be too many ivory ornaments either: 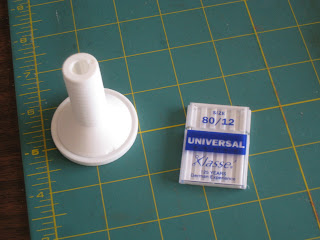 though I have one spool left, so I think I can get 6 more.  I adore these icicle ornaments.  All 6 are very, very different, and if I could be persuaded to part with any, could make really nice gifts.  That might be a big "IF."

It will be interesting to see what my "secondary" stashes look like by November 1.  I have a pretty big stockpile of needles, thread, zippers, elastics, ribbon--all sorts of accessories.  I like to keep extras on hand so I don't have to run to the store in the middle of a project, but I think it might be like my first year of Cold Sheeping when I learned that I didn't use up yarn nearly as fast as I think I do.  Sewing needles I might really use as fast as I think they do, as I try to be really good about changing them frequently and using the correct one.  I wasn't taught to do that--I think growing up the only time a sewing machine needle got changed was after one broke and I certainly don't remember ever being told there was a difference between any of them, but then again, I didn't know there were multiple types of feet to use either.  Maybe this has something to do with why I didn't enjoy sewing when growing up?  Or maybe it was that I kept making dopey things I would never willingly wear in public..................:)

It's only 2:00, so I could either cut out a new project or go knit or maybe start a new ornament?  I'm a little unsure what to do next, to be honest.  The dress took less time than expected, which never happens, so you can understand my general state of confusion.  It would be like boasting about the success of a knitting project without being immediately smacked by the Knitting Gods.  It just doesn't happen...........