The book Andy gave me for my birthday, 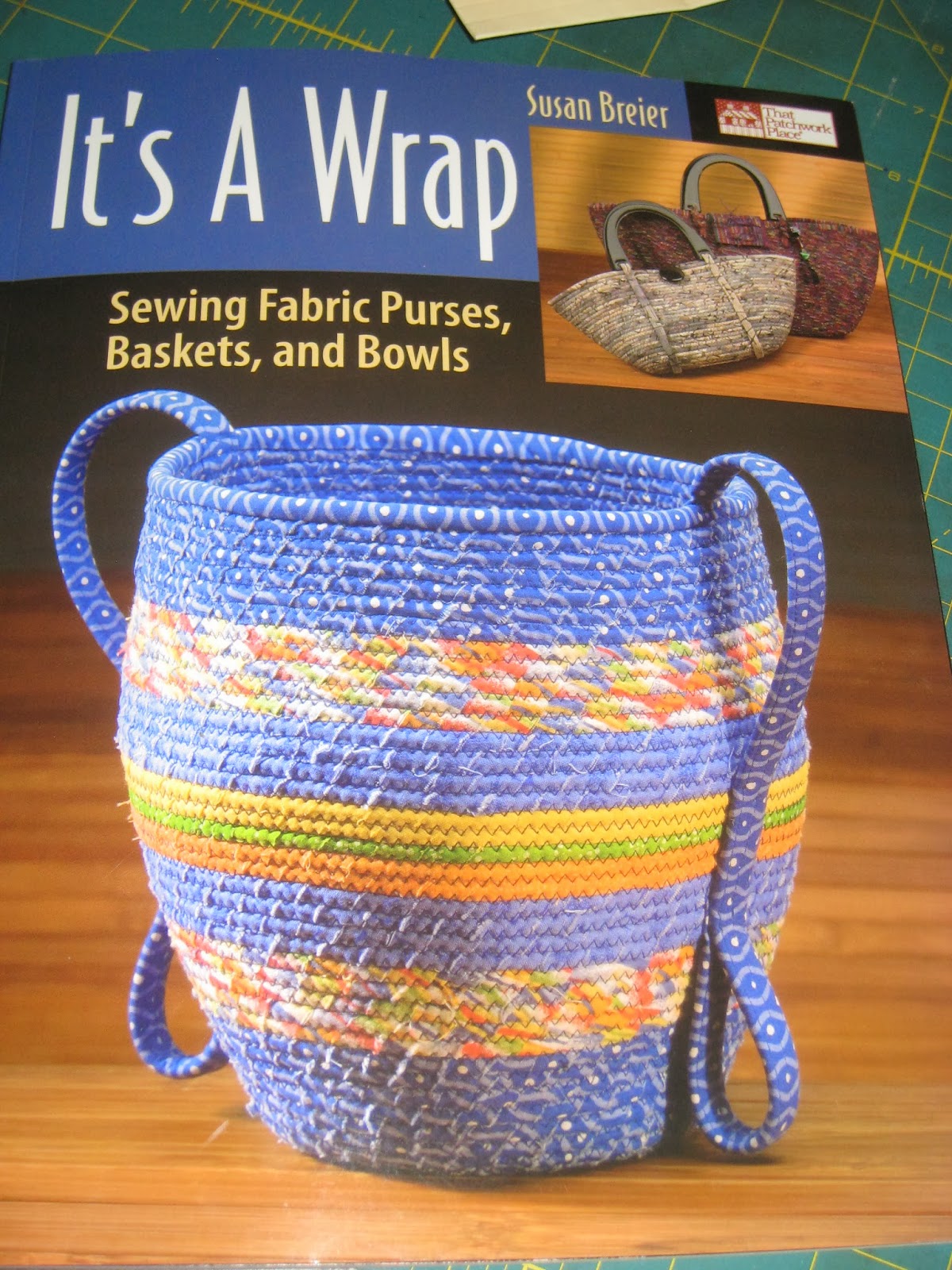 is written by a free-thinker after my own heart (when on cold medication, one can mix metaphors).  She says scraps of fabric work just fine, and it doesn't really matter how you cut them.  The book I bought says quite specifically that one MUST cut strips on the bias and they MUST be a very specific width.  I'm always suspicious of "musts," as they are so often wrong.  In chemistry, I believe "musts." In making baskets, I have my doubts.  So, this week while wallowing in self-pity, I cut fabric strips 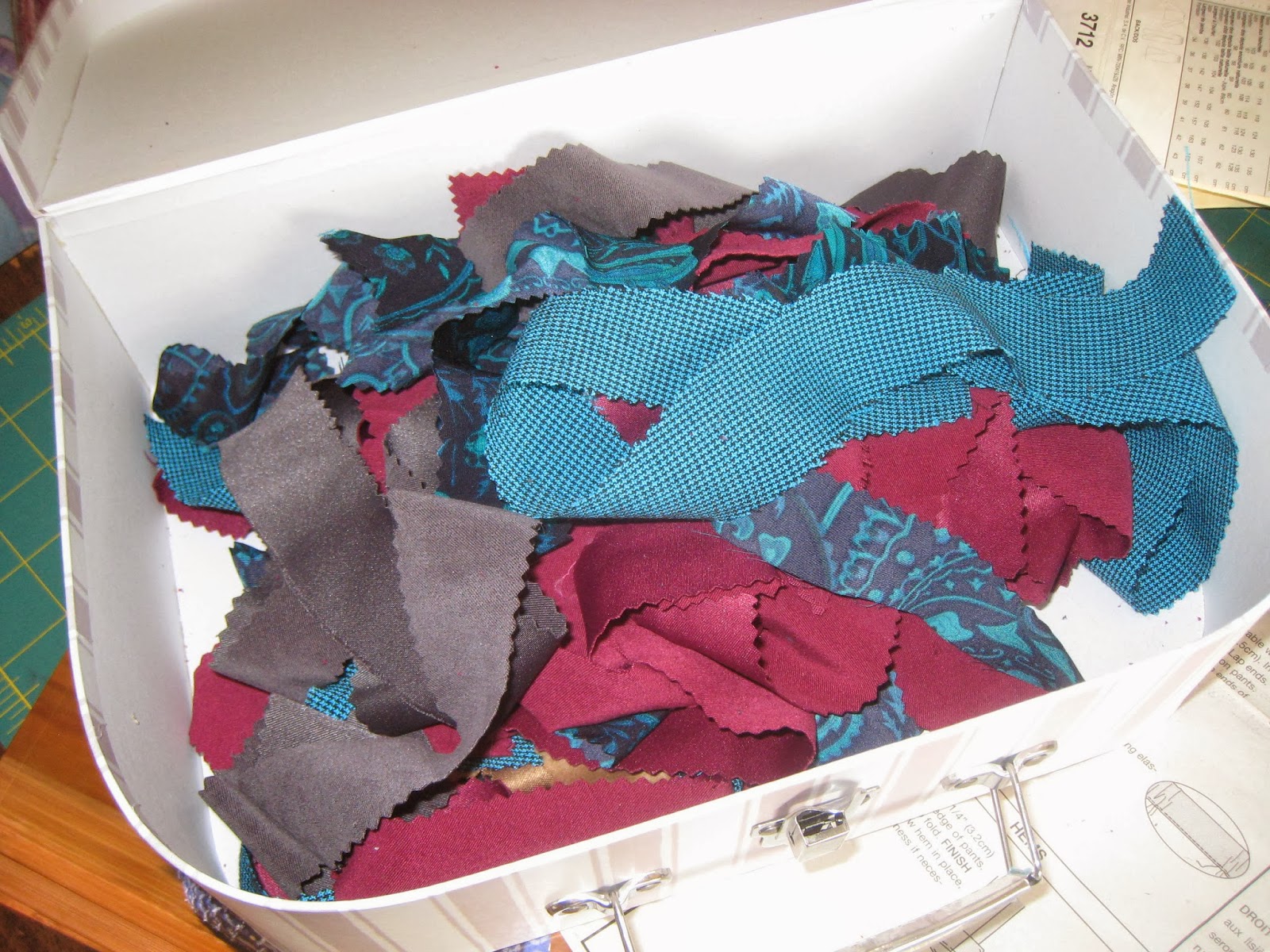 I just used pinking sheers and not a single one is perfectly straight, but again, the author said it wouldn't really matter.  I've only seen these baskets made with cotton fabrics, and being me, I wanted to see what it would be like with other fabrics.  I figured as an experiment, I'd be keeping this bowl, which is sort of fun as I won all the clothing that generated these scraps except for 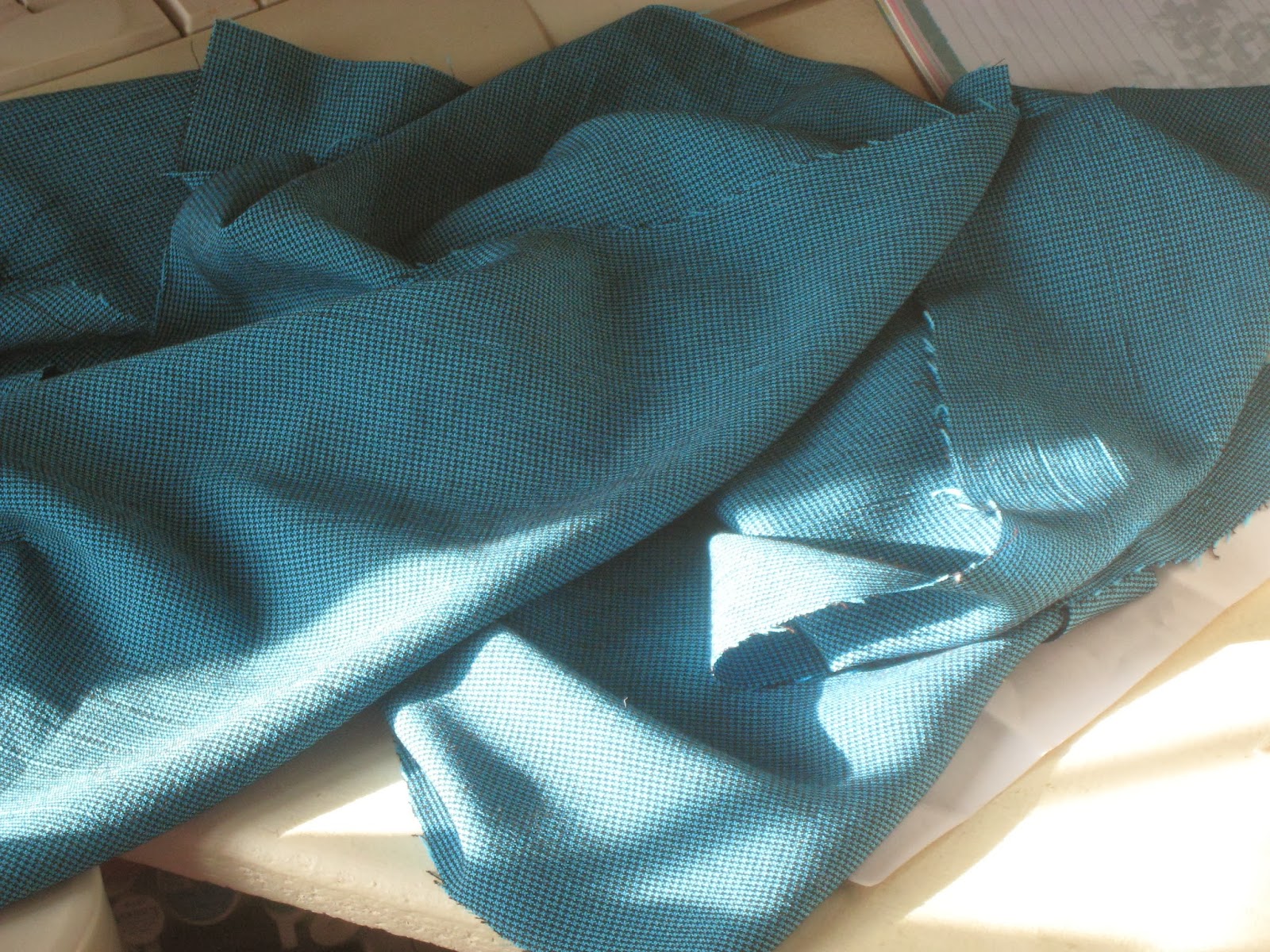 which is still in progress.

Usually, I'm not wild about "scrappy" quilts or anything of the kind, but I thought if I used one color to unify the others I'd like it--or enough to put things in, at any rate. 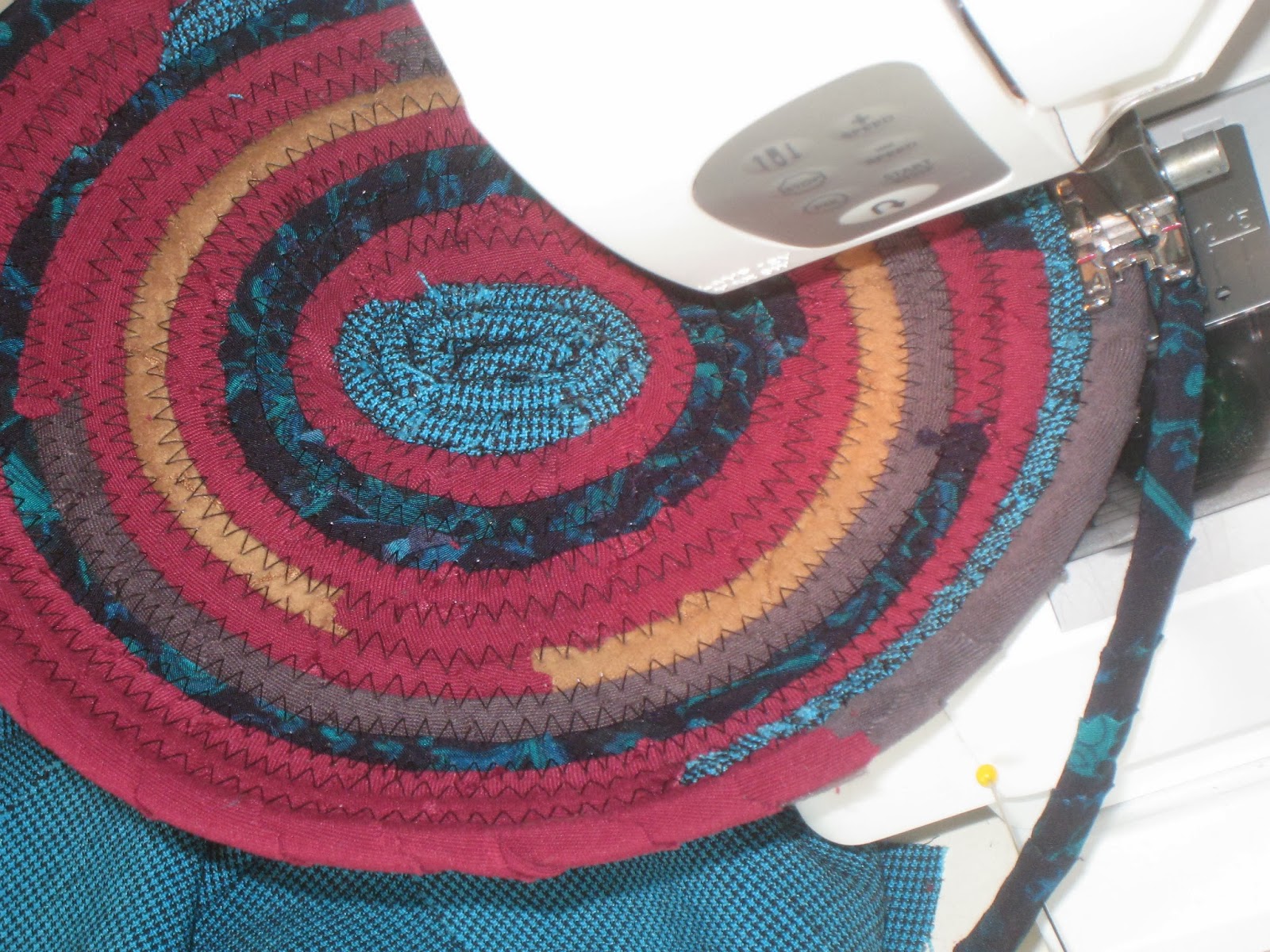 Flat wasn't too difficult, but I did panic just a bit when it came time for the shaping.  If I'd have thought of any way to use a trivet or placemat in the sewing room, it would have stayed flat.  But, I didn't come up with anything. 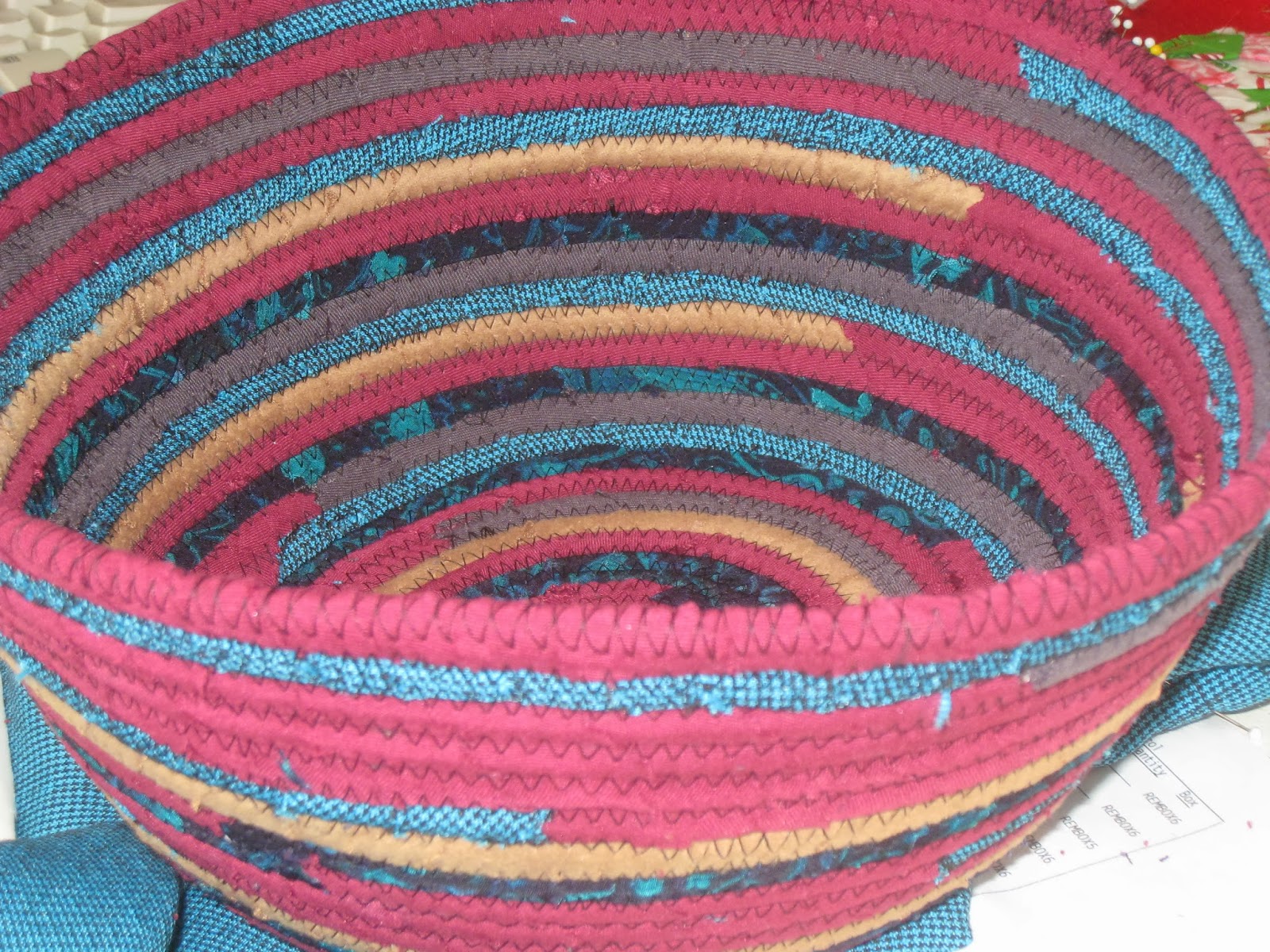 Except, eventually, a bowl.  At some point in the process, I managed to change from wrapping the fabric strips counter-clockwise to clockwise, which the author warns NOT to do because the change will be visible.  Well, the change was NOT visible because I couldn't find it.  I wouldn't do it on purpose, of course, but considering all the other mistakes on this, the thought won't cost me any sleep.

I ended up with three white spots where the rope showed through my wrapping, 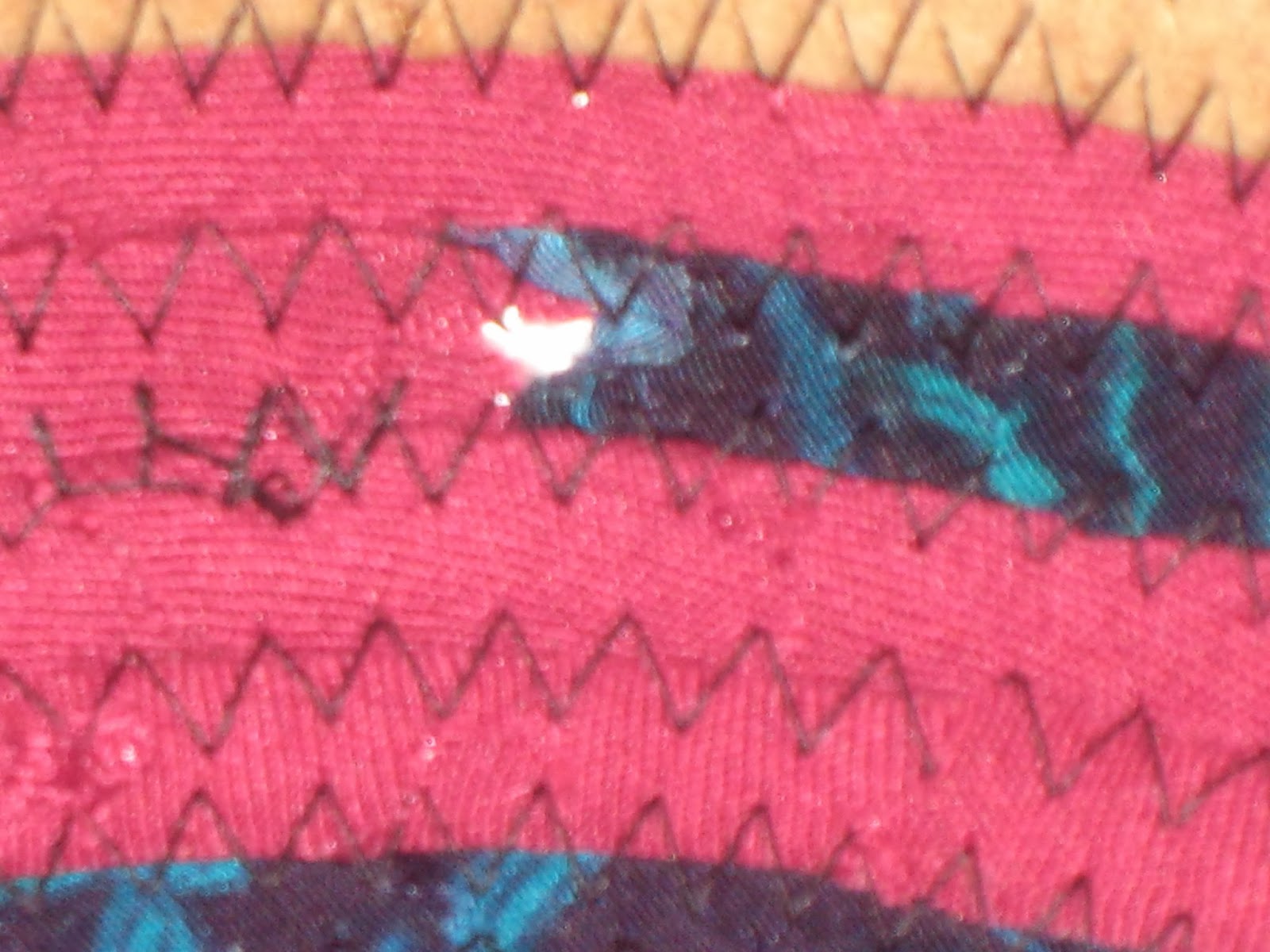 which are now covered over by a Sharpie marker.  The fabric on the top of the bowl was so puckered and frayed that I zig-zagged over the rim of the basket to hold it in place, 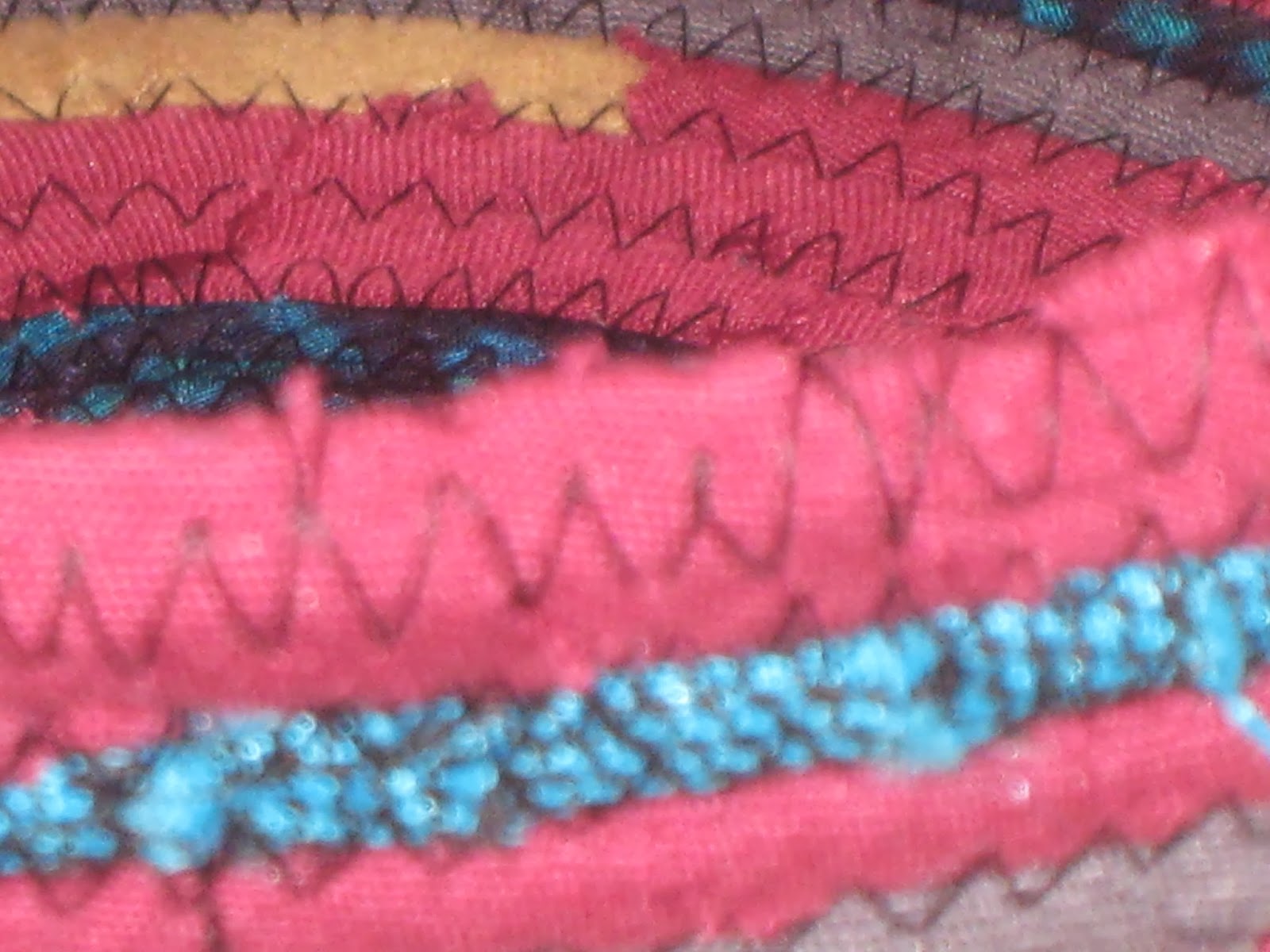 which I would try to not have to do in the future.  All that being said, however, I am rather pleased with the results.  It's a first attempt, and I learned a LOT.

* shockingly, fabric that ravels badly will ravel badly when used to make bowls, and aren't easy to work with
*  fabrics with moderate amounts of stretch ARE
*  thinner fabrics like peachskin worked better than the thicker microsuede
*  have a glue stick handy at all times
*  also have a wet rag handy for when the glue stick gets the best of you
*  longer strips are easier to work with
*  when using multiple colors, it looks best if one can do full rounds in a color before changing
*  uneven strips didn't make any difference at all
*  strips can be too thin, but too wide makes too much bulk
*  have a bamboo skewer at hand
*  a finished object is a finished object
*  sewing mistakes are rarely fatal, and often unnoticeable