As I get closer and closer to 111, I'm fantasizing more and more about quilts and sweaters and big lace shawls.  After 2 years of mostly small projects, I am really ready for some bigger projects.

Yesterday I started the day by finishing up the new set of mitten ornaments: 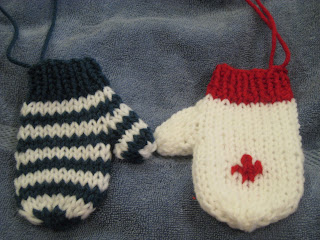 then cranked up Jeeves for a couple more towels, 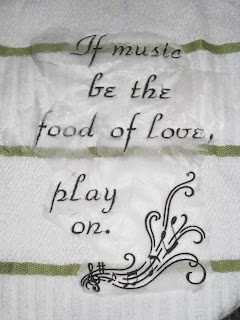 partly because it's a fast way to get a finished project, but mostly because I am totally in love with this design.  I bought several musical embroidery designs from Embroidery Library,  so then it was just a matter of finding a quote to go with it.  I've always loved this one from Shakespeare's Twelfth Night, even if it is uttered by Orsinio, whom I have always considered to be one of Shakespeare's biggest drips.  Still, it makes a nice towel AND finished project number 105.

For project 106 I thought it might make a nice change to make something that isn't "one of two," so 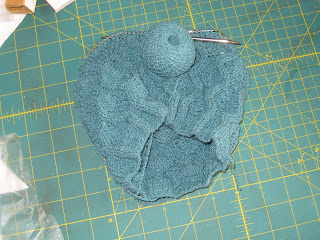 I'm making another chemo cap.  I've almost used up my entire stash of this yarn, so there probably won't be any more of them for a while.  I think I have one ball left after this.  I like having them available to give to friends dealing with cancer, but I'm even happier to say that MOST of the finished caps are still in my possession.  I hope the current supply will last me several years.