I was working so hard to have #14 done today, but the knitting is done and most of the sewing is as well: 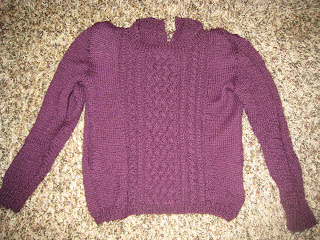 And of course I did have to spend some time working on Christmas gifts. I have 11 Christmas stocking to make this year, and so far I have: 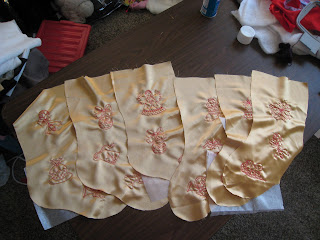 6 legs embroidered. 5 to go & the sewing & names and all that. But at least I'm this far. Theo was feeling spunky enough to "help" 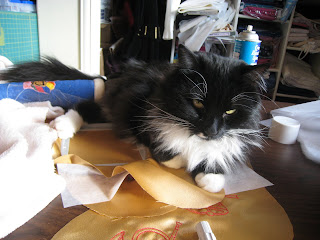 but soon abandoned me for a more festive spot: 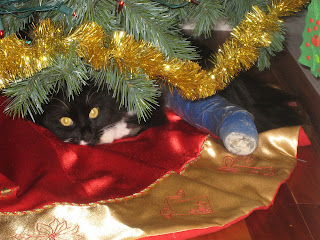 so Callisto joined me with her best "Theo" pose: 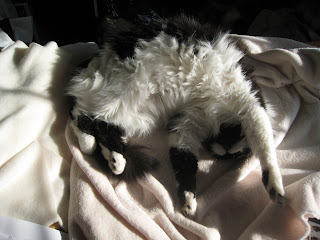 I don't think they'd have this sort of dedication if the sewing room didn't face south and have great afternoon sun.

The "invalid" is doing fine and in a stunning show of independence, is refusing to join me in the sewing room tonight--I think because I won't let him go outside--and is instead curled up right outside the door. 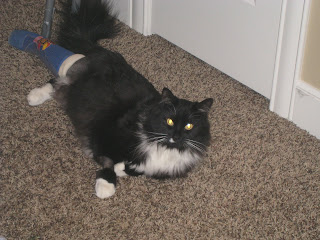 It's not much of a show of independence I'll grant you, but considering we've been almost inseparable for more than a week, I can understand his need for some distance. I need a little distance once in a while as well--usually right after a litter box episode.....

So, I could finish WIP #14 later tonight....then what? Dem fischer sin fru? Fleur? I think I can hold out for at least a few more days before casting on something new. Do I take the easy route and finish Fleur, or do I try to move some of the big projects forward?