After much wrangling, trying every option I could think of, and ripping out more seams than an entire wardrobe would require, I finally finished the wrap skirt, and have officially used up another 5.875 yards of early fabric stash.  I was so mad at the skirt that I didn't think to get a picture of it (or the pants) before it went into the wash, but I did take a picture of the shirts, 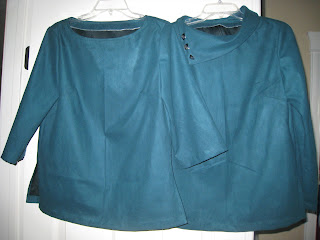 which, even after SAYING that the one with the collar would have short sleeves and the other would get the long sleeves, I managed to mix up.  Obviously, there might be a reason I usually knit at night instead of sew.  The mix up isn't tragic, so I decided to leave them.  As I really like the shirt pattern, there's a possibility I'll make more of them AND get them correct, so these are now known as "variations" rather than "stupid flippin' mistakes." Sometimes even hobbies need spin doctors.

I still need to add the accent buttons to the collar (which ended up on the opposite side than it was supposed to but at least is in the front), 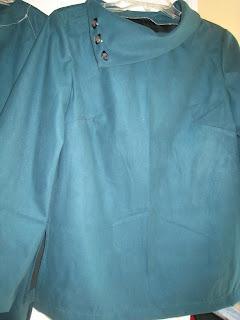 but after every other bungle, I thought I'd give myself a little time to decide on alignment, placement, and to lower the odds of doing something like stabbing myself in the finger. 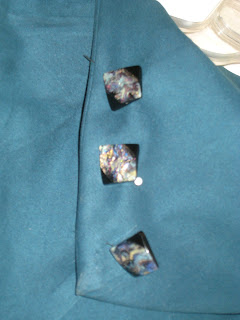 I think aligning them as diamonds rather than squares looks best--but I thought I had the collar and sleeves thing right too, so...........

After all THAT fun, I was a bit leery of trying anything so complicated as a fleece jacket with an improvised lining, so I dug through the closet to find: 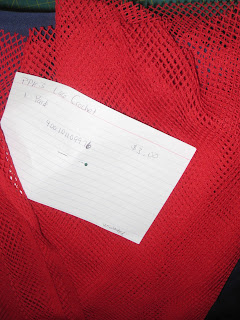 some mesh fabric that I bought to make some hanging bags for the pantry, which I think wouldn't be too tricky, 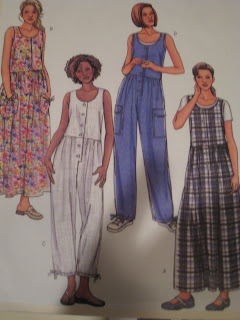 the pattern for my favorite summer gardening dress, which would require NO alterations to work,

and my favorite summer dress 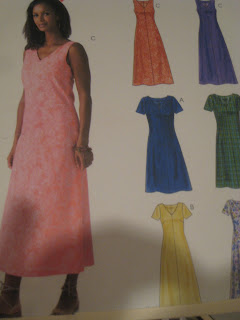 which I've made so often that even in the error-prone rustiness of sewing that I'm in now, I would probably be able to pull off without error.  It's amazing how much one can forget in a year.  Especially when there have been a lot of drugs in that year.

Not forgetting my ornament challenge, I have started the third ornament from the knitted balls book: 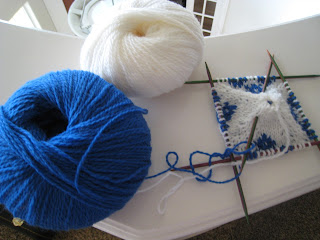 having decided that I should go straight through it rather than allowing myself to pick and choose, since that would leave the most complicated ones for the end of the year.  Color work will never be my first love in knitting, but I do love how these look, and I really like this color combination.  I am using Knitpicks palette for an inexpensive wool fingering yarn, and I've never found their yarns to be true to color on their website, so the colors I ended up with were a bit of a surprise.  Not bad--just not exactly what I had pictured.  This particular blue is actually better than I had pictured, so this ornament is rather fun to make.

And when I got tired of graphs and "fussy" knitting, I moved on to the second sock: 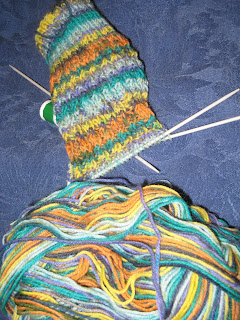 which is about 2/3 of the way to heel turning.  The pattern requires a twisted stitch row on every 4th row, but otherwise is just a straight K2, P2 so even after all the mistakes of the weekend, I'm feeling pretty safe here.  Now if it had a collar or sleeves..................