It's May, and I think it's fair to say that I'm a bit behind on my 12 12s for the year.  So what am I doing?  Planning my challenge for next year.  Because I really, REALLY do not have a brain in my head.

It has a lot to do with this: 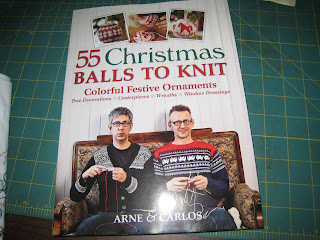 which is my one lapse on the crafting-book ban.  I just love this book, and want to knit straight through it, which is fine.  It also has a lot to do with how much fun I had with the mitten ornaments last year, and what great gifts they made, and the fact that I was able to track down (and found in my stash) lots of glittery Christmas yarn just screaming to be used.  The BIG reason, however, is both to do something fun and to push myself to try new things.  For several years now, I've made it a goal to read or listen to 100 books per year.  When I was only reading 10-12 books a year, I was really picky about what I read and didn't venture much into new genres because if one only gets 12 books a year, they'd better be good.  Now with 100 every year, I do stop if a book is bad or annoying, but I've been exploring all sorts of new stuff--classic children's books I never read, memoirs, science fiction/fantasy--because the emphasis is on volume.  I'm sure it wouldn't work for everyone, but it's been fun and I've found all sorts of books I would have never read that I enjoyed thoroughly.  When only making a few ornaments, I'm going to stick with stuff I know will work--like the mittens.  With only doing a few, the fact that I struggled with trying to do them made me too timid to try other things.  If I need 365 of the things, I'm hoping I'll be a lot more willing to branch out and try a bunch of the ideas I have had that I'm too intimidated to try.  That's the plan, at any rate.  I'm not going to make it one ornament per day--that sort of thing never works out in my life.  I haven't worked out the logistics yet--maybe I'll go through my crafting books and make a list of 52 patterns, then put them on slips of paper in a jar and draw one each week.  That could be doable.  Then leave the other ones up to chance?  Or, more probably, desperation?