Having Recovered From the Trauma.......

Sunday I laid the fabric out flat on the floor 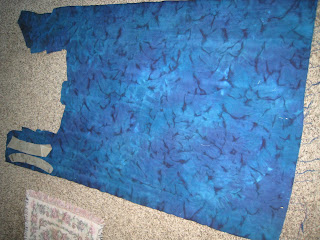 (probably among the top 10 things I'm not really supposed to do because of my back), and found that if I changed the orientation of the collar pieces, I could get the shirt cut out.  It's not something I'd do with cheap fabric, but this one is pretty straight grain-wise, so I remarked the grainline on the collar pieces, and ACTUALLY remembering to make sure one front and one sleeve were cut with the pattern right-side-up and one of each WRONG side up, I got all the pieces cut out and 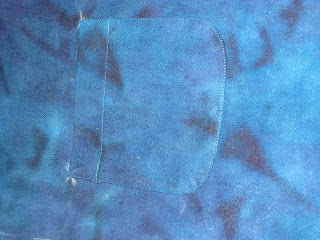 have even made some progress!  The shirt pattern I'm using is one I've made fairly frequently, and one of the features I like on it is the button band, which on solid prints one can roll to the outside to create the look of an added band.  I did think about trying it with this shirt, but the back 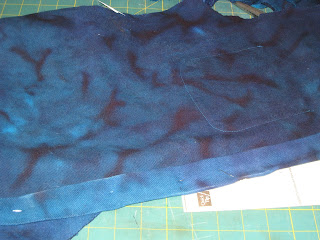 is enough of a darker shade that I thought it would look strange, and I thought one error per shirt is really enough for any project--which is a brave thing to say considering I still have long sleeves WITH CUFFS and the two-part collar still to go.

When I finally get this finished, I will have used over 40 yards of fabric for the year.  Not as much as I had intended, but I am thrilled to be using up one of the oldest fabrics in my stash.  The blue moleskin was even older, though I'm a bit less thrilled about that as the shirt is an unwearable disaster.  STILL, a stash is much less frightening if one is actually using it up (albeit slowly).  Really, REALLY slowly............

Speaking of slow, I wasn't feeling very good yesterday, so the new scarf and I spent the day together, 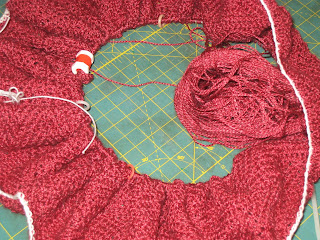 and I have finished the second of 7 pattern repeats.  It's going much faster now that I can see the pattern developing and know what I'm doing. The yarn I'm using is actually a light-fingering/heavy lace, so slightly lighter than the pattern called for, so it will have a lovely drape to it.  I'm really pleased with how it is turning out--which is good because as soon as I get this one done, I have to cast on a second.  And I'm very close to using up my first ball of yarn, which will put me 330 yards toward my new staying-on-the-sheep incentive plan:  I packed up almost all the new yarn I bought and have NOT logged it on Ravelry.  For every 5,000 yards of yarn I knit from stash, I can get one package out of the box.  I'm guessing I will have LONG forgotten what I bought by the time I get there, so it will be a surprise AND new yarn, and 5,000 yards is quite a bit of knitting--two or three sweaters--so I could keep this up for several years (I hope).  I think my STASH could last for 10 years of knitting, but I'm aiming for 3 at this point....maybe 5 if this works, because I can always add non-yarn "prizes" if I run low.  :)

Maybe maturity ISN'T getting control over one's inner child--it's learning how best to bribe her............:)