The new bribery plan:  I only get to play with the new yarn if I behave myself and don't "overdo"

The GOOD news is:  I feel a lot better after only one physical therapy session

The BAD news is:  Being me, and having been severely restricted in movement for over two weeks now......well, it was probably just a foregone conclusion that I would be a complete idiot at the first sign of recovery.  I'm probably lucky I didn't do anything completely insane, like cartwheels through the house.

I don't think I did anything that would involve a set-back or the need to take those darn Valium pills, but I will be resting for a while and behaving myself for the rest of the day.  And if I DO behave myself, I get to play with this: 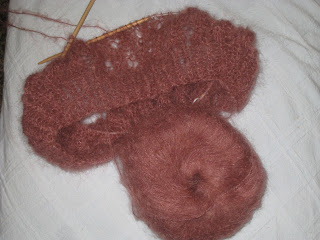 This is one of the new gift hats I ordered yarn for.  I'm thinking that I might end up getting two hats per ball instead of one...which means I have a LOT more knitting ahead of me than I thought.  I'm enjoying it, though you can tell where I was knitting when the Valium kicked in last night.  The pattern is off a bit in one spot, though I don't think it's noticeable.  In any other yarn, I would rip it back and fix it, but mohair really hates to be tinked or frogged, and I can only find the problem because I know it's there, so there it shall remain.

The box of new yarn is here on the bed beside me for inspiration/bribery purposes.  As I order new yarn so rarely, I am totally milking this for all it is worth.  When it first arrived, I was so overwhelmed by possibilities that my first project was 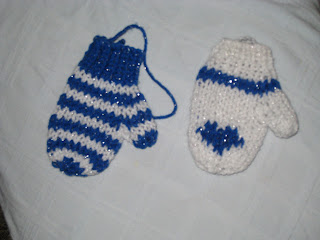 Yep--more mittens!  I got some get-well sparkly white to go with the sparkly blue, and so far the blue mitten ornaments have been the most popular, so I thought a few more wouldn't hurt.  The white one is mistakenly missing two rows, which is why it looks so stubby.  But as long as it isn't near the normal mittens, it will probably look fine.  Project 112 for the year--can you believe it?

I have not yet cast on a big sweater or shawl.  I got a bit overwhelmed by  possibilities and then decided to work on some extra Christmas gifts.  AND, I am currently at just under 15,000 yards of yarn and 83 balls of yarn knitted up for the year.  It's certainly not a personal best, but it is already my second best yardage year since I've been tracking, so I'm hoping to make it to 16,000 or 17,000 yards by the end of the year.  This probably helps explain why I didn't immediately cast on the fingering-weight sweater I have been lusting after.  :)