Yesterday I had a physical therapy appointment, and although I have explicit instructions to rest every-other day for the next two weeks, she was still really pleased with my progress.  And the fact that I'm starting to hurt most afternoons probably makes this a wise decision.  She also gave me a new exercise for strengthening some little muscles that don't seem to mingle much with the other muscles.  Standing near a wall or counter or something to balance, I'm to close my eyes, lift one foot off the ground just a bit (ankle height) and hold it.  She said closing one's eyes helps to work the muscles as so much of our balance is sight-based.  I thought this was a brilliant new addition, because my next stop was the post office, and having something constructive to do in line made my day.

It seems that if a muscle is hard to get at--say, doesn't really get involved in walking or other exercises--it may strike some people that it could easily get overworked.  Some people--just not ME.  I was happily doing my new exercise in line, congratulating myself at how long I could hold it each time, and was altogether pleased with the whole visit.  I hopped in the car, drove to my next stop, and was halfway around the grocery store before I noticed a bit of a twinge.  And it was only at this point that it occurred to me that 30 minutes of a new exercise to work muscles that don't get out much might have been less than brilliant--especially that "let's-see-how-long-I-can-hold-it" thing.  I think what amazes me the most about this entire thing is that--through all the pain and all the set-backs--I still manage to be shocked every time something is hard or needs to be approached gently or hurts.  All things considered, it would make sense if I sort of expected pain.  But, no--I just go on with all the subtlety of lime green Fun Fur and am shocked when it doesn't work.  Hm.......

So, I spent yesterday afternoon with my old friend, the heating pad, and am being very, very good today.  Or trying to.  It's 10:00 AM and I haven't done anything wrong yet, so that's a start.  :)

I'm still REALLY excited about my progress, and decided a small celebration is was in order, so this 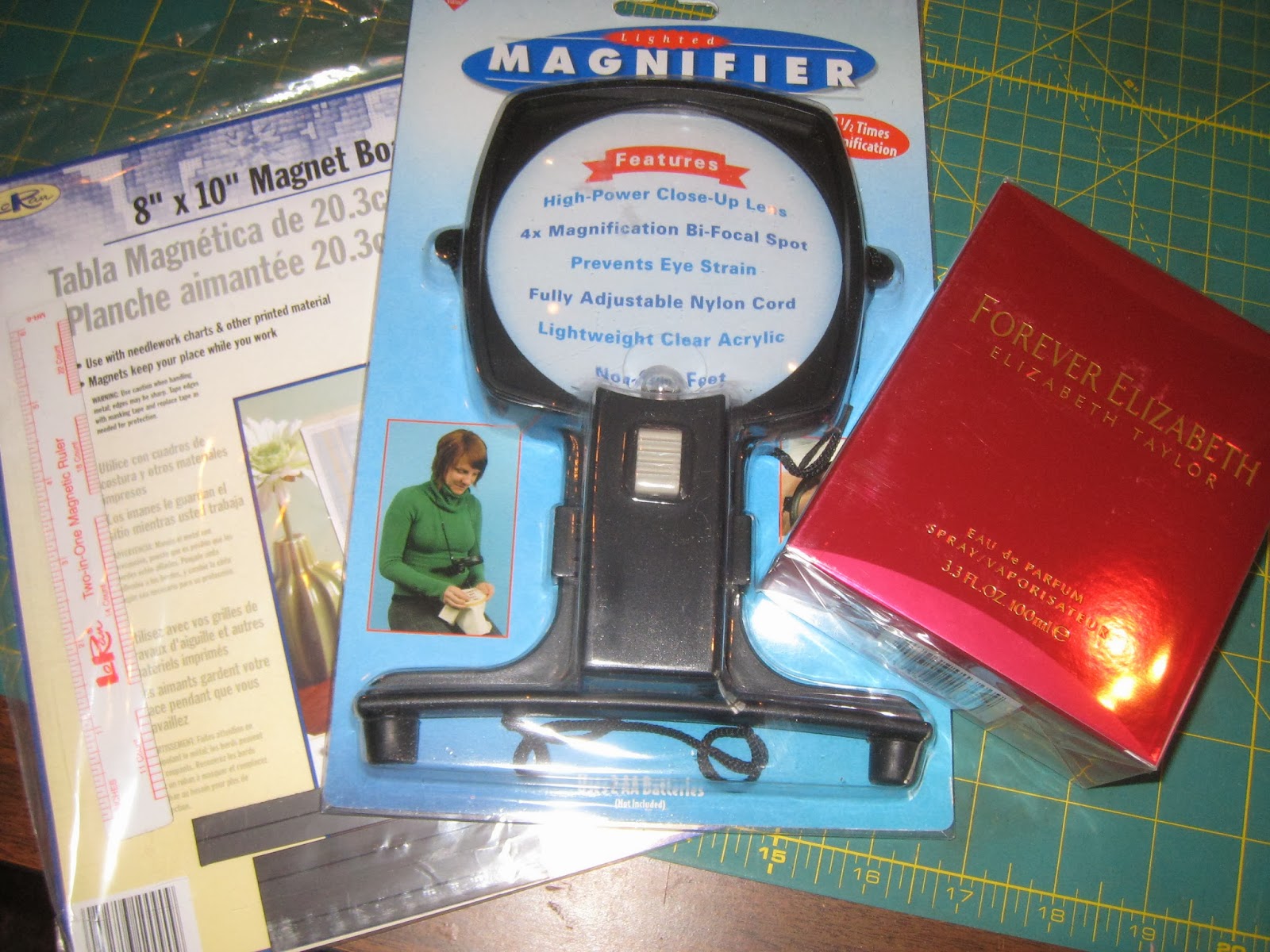 arrived in the mail yesterday.  The "celebration" is the perfume on the right.  Andy & I exchange fragrances every year for out anniversary, and while I have always loved perfume and cologne, now it's even more fun.  I thought about clothes, but that doesn't work until I can wear something other than athletic pants, and going away for a weekend is still a LONG way off, but I wanted something associated with being OUT AND ABOUT.  So, I bought a new perfume.  I like picking out scents in person, but there's also a great deal of fun in buying one without knowing what it's going to be like, because I end up with things I wouldn't have picked out but are fun and different and I've liked almost everything anyway.  So that was fun.  The other two items aren't a celebration at all, but and admission that now that I'm up and about and only settle down to crafting at the end of the day and the blasted cross-stitch projects are a bit of a struggle to see by then, so this is a pattern holder and a magnifier with a light.  I probably could have put much stronger lights near the bed, but I thought I might regret that--like the first morning I turned a 100-watt lamp on.  I am ignoring the "includes bifocal point" part entirely.  I was going to wait until this year's craft purchasing ban ended, but I decided that since this was not a fun purchase AT ALL and I was going to drive myself crazy trying to come up with alternatives, I thought a "maintaining sanity" exemption might apply.  I haven't tried it yet as I'm still a bit surly over the "bi-focal" thing, but the perfume is great.  And doesn't make me feel old at all....................