Bob:   Well, it's been a tremendous couple of weeks, but it's time to say good-bye to the 2010 Ravelympics.  With tonight's closing ceremonies, the games and the knitting frenzy come to an end.

Ron:  Hard to believe it's only been 17 days.  What a tremendous woolly output we've seen from the nearly 10,000 worldwide participants.
Bob: We're here with one of the participants.  Tell us, Ms. Sutton, how do you feel now that it's all over?
Toni:  Well, Bob, I think I'm still a bit shocked to have actually finished.
Ron:  So you weren't sure you would finish?
Toni:  There are just so many things that can happen--a design flaw, running short of yarn, broken needles, a freak moth invasion--nothing is a given in competitive knitting.
Bob:  Now that you've come this far, what are your plans?  Are you considering turning pro?
Toni:  Well, Bob, I did consider it briefly, but the life of a professional knitlete with all the travel, the training--the rigorous finger exercises--and the grueling competition schedule--I just don't think I'm cut out for it.
Ron: As one of the medalists, have you been approached for any product endorsements?
Toni:  There were some early talks to appear on a new breakfast cereal box, but initial product tests didn't go very well.
Bob:  Any idea what the problem was?
Toni:  Well, I haven't heard anything official, but I think it might have been the name.  I'm just not sure a big bowl of "Woollies" sounds like a great way to start the day.  Or perhaps it was the free life-sized toy moth in every box.  That may not have had broad market appeal.  It's hard to say.
Ron:  And what are your immediate plans?
Toni:  Well, I think first is a little housecleaning is in order.  And I've already started a short, easy-to-finish scarf that I'm getting to take my time on. 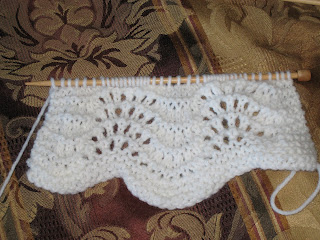 Then, who knows?  Perhaps it's time to tackle a quilt again.  After all, I've just knit a sweater in 15 days.  How hard could finishing a quilt really be? 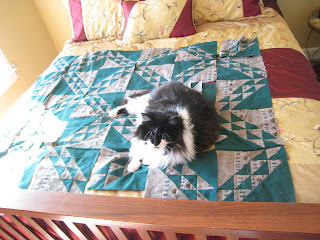 Bob:  And with those famous last words, we now return you to our normally-scheduled programming........
Posted by Toni at 9:11 PM 3 comments: