You can blame the lack of knitting on this: 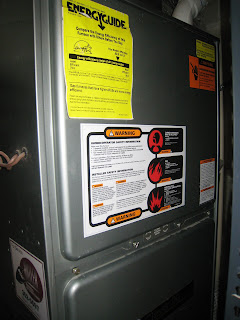 About a week ago our furnace started making really strange noises. Being a much newer and more complicated model than either of our old houses--which meant my old just-jiggle-the-wire-trick wasn't going to work, we immediately called a repairman. He found nothing--and the furnace refused to reproduce the strange noises while he was here--so he made a strong push to sell us a water pump that wouldn't solve the problem and left. Yesterday the furnace would come on briefly, then go off, leaving us cold and hopeful. In case it was a gas leak, I shut the thermostat off and called the repairman again. He walked in, flipped on the thermostat, and we had heat. I told him I had turned the thermostat off "just in case" but I don't think he actually believed me. I had him do the winter maintenance on the furnace in case that would help, and he left thinking I probably didn't know "on" from "off."

Today we had no heat whatsoever.

(And at this point let me just point out that because I am a knitter, we have lots of wool clothing around here, which I can now assure you is a necessity when temperatures reach 45 degrees both inside and outside your home. It's a nice feeling as a knitter to have been saved by woolen knits!)

I am a dedicated knitter--possibly to the point of obsessed, but even I cannot knit when my fingers are frozen. Alas! No knitting! 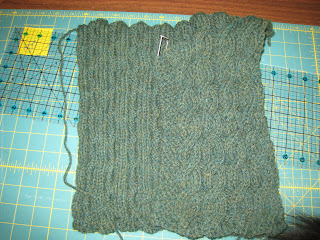 The toddler sweater--complete with Theo's tail, 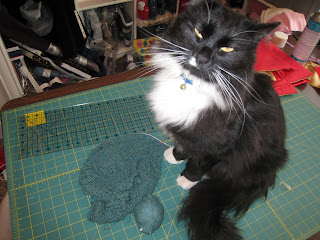 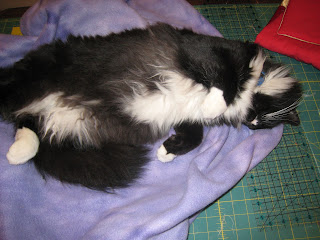 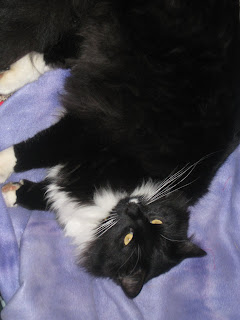 and Theo being bribed off the table by moving his fleece to the floor. Sigh....it really would have been a cute jacket.....

And finally, one of 4 Christmas tablerunners: 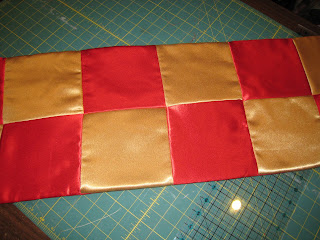 The colors are a little nicer in person--a very Christmassy red & a nice contrasting gold. And now we have learned that while crepe-back satin might not be too difficult to sew with, anything resembling quilting or trying to get it to form straight edges and not wiggle all over the darn place is almost as much fun as root canal without anesthesia. Or trying to fix a furnace......