After cherry-picking yesterday, I finally had a chance to give Jeeves a test run, and decided it would be fitting to try to finish the summer towels that I had started a year ago when I found out that Holland's Sew Shoppe had sent Jeeves home with more problems than he went in with.  I stabilized, hooped, and everything was going along swimmingly until 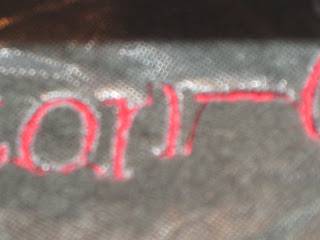 I apologize for the blurry pictures, but until I actually take the time to A) find my camera manual and B) figure out how to focus said camera, I take a lot of blurry zoomed pictures.  It's a much smaller jump, 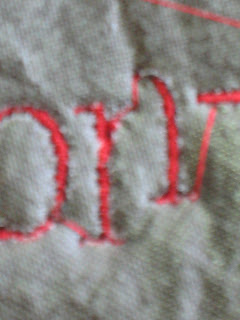 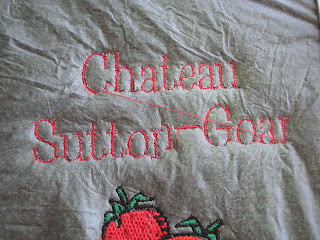 but it's still a jump.  Now, I have a LOT of faith in Larry at the Twin Falls Sewing Center, and Jeeves had certainly improved, so I took several pictures, explained the problem, and emailed them to Larry so he could look at it when he came in today.  I turned Jeeves off and set everything aside, because I wanted to confirm with Larry what he might need to see if I had to take Jeeves back to Twin Falls.

Then my phone rang.

Even though the shop is closed on Sundays, Larry was going out of town for two weeks starting today, and didn't want to leave me in the lurch, so he was following up on his day off.  He had looked at the pictures, and just by looking at it, told me that a jump in embroidery like that could be caused by EXACTLY two possibilities.  Either the hoop had been bumped OR I had a data packet transfer problem.  Being a thorough sort of chap, he had already checked and adjusted my machine and had already fixed some other issues that were happening, so he knew there were no other options.  Incidentally, when I had told him I left everything as I had hooped it in case he needed to see it, he said there was NO WAY that this was being caused by hooping or stabilizer.  Take THAT Hollands bastards!  Larry was able to walk me through possibilities, had me wipe the writable embroidery card I was using, and...... 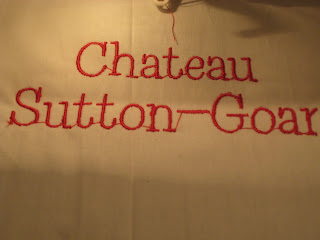 Jeeves is sewing like a CHAMP!  I did a second towel without any problems 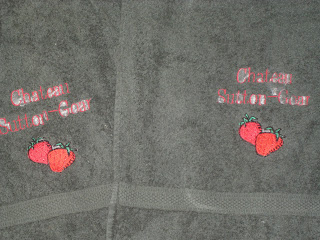 and was so excited that I did a dish towel just because I could: 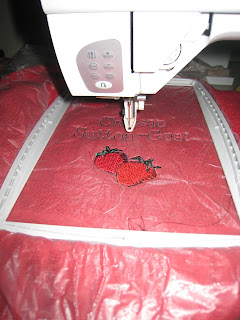 Working with the new dealer is just a night-and-day difference to the rudeness and incompetence I have been experiencing for a year with Hollands--everything from the new shop actually taking an inventory of what I brought in with the machines to letting me know when my machines were ready to actually knowing what they're doing and actually fixing the problem instead of creating them.  I just still can't believe the whole nightmare is over--and I admit I may have just the slightest case of hero-worship going for my new dealer.....or maybe a not-so-slight case........

Now I'm actually going to be scrambling to figure out new embroidery projects to try, because I had frankly given up all hope by now.  I think Theo had as well.  I forgot to warn him that there could finally be embroidery going on, and I'm afraid the shock was simply too much for him.......... 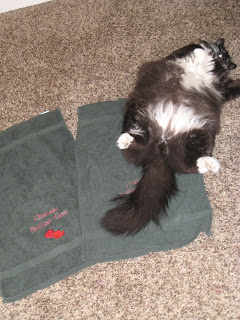