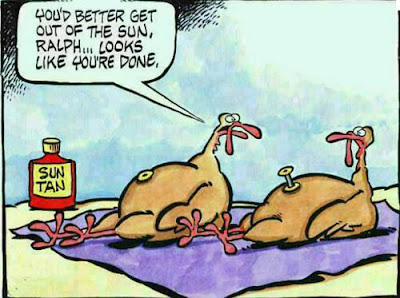 When I had stepped off my sheep earlier this year, (among other things) I bought two balls of Vanna's Choice "Glamor" yarn--one in blue, one in sparkly-white--to use for the colorwork ornaments, and I was so motivated by finishing the latest ornament (and needing a LOT more projects finished in a short span of time), I went on a bit of a binge: 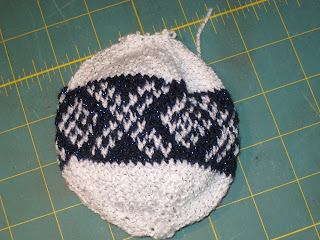 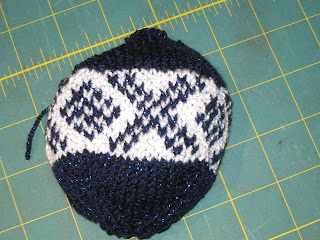 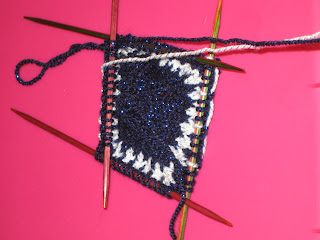 I AM LOVING THE SPARKLE!!!!!!!!  I am also REALLY wishing I'd bought the red sparkly colorway as well, but that's another story......

I had also bought a green wool yarn for the ornaments, and finally used it: 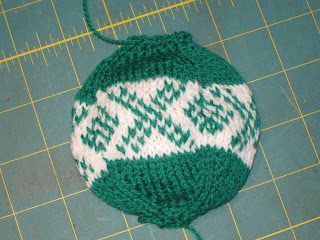 Have you guessed that this particular pattern is the fastest one?  I might be getting desperate, but I can be practical WHILE desperate.

I have been ironing and cutting fabrics, and when I finally had enough variety in the 1-inch strips, I decided to try another fabric bowl: 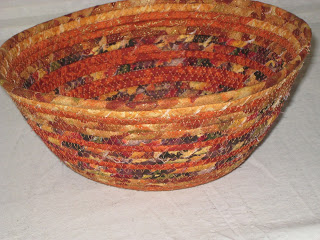 which I am very pleased with.  Using strips instead of scraps is much easier, but this is also a great way to use up scraps, so both are good.  I have found that when I'm trimming the edge of fabric for cutting other strips, that rough edge is PERFECT for bowls.  This bowl used 13 or 14 1-inch strips, and I have discovered that it is easier to work with strips that are thinner than 1-inch than it is to work with ones that are wider than 1-inch. 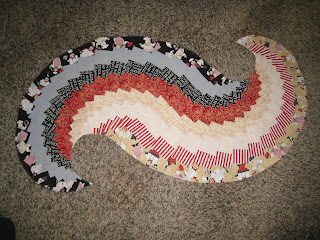 the spicy spiral runner is done, 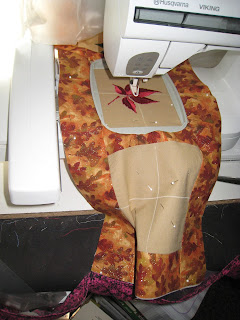 a fall runner is in progress, 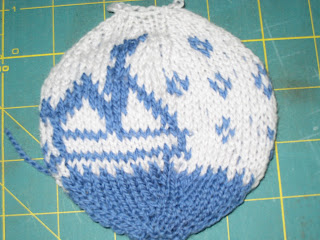 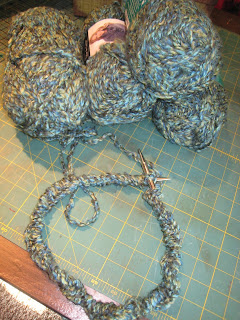 and I have started a baby blanket with some super-bulky yarn on size 11 needles.  Maybe not the speediest project ever, but 4 skeins of super-bulky yarn take up a fair amount of space in the sewing room, so this is visible dent knitting.  So it will make my sewing room closet just a teeny-tiny bit less frightening.  This is all I can hope for right now.

I finished this last night.  Project 96 for the year! 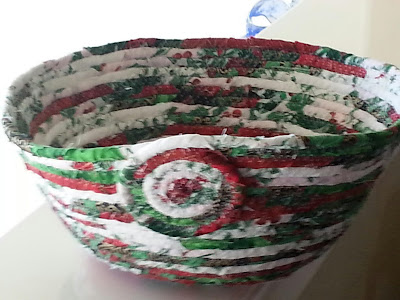 I'm still learning how to work with fabric on the rope bowls, and finishing with the little swirl was more challenging than I anticipated, but I'm pleased.  The shaping is a bit wonky, but I'm still happy with it.  And now I only need 19 finished projects by the end of the year!

The obligatory I've-been-on-a-plane cold is still hanging on, which is annoying, but sort of good for my project count.  We now have: 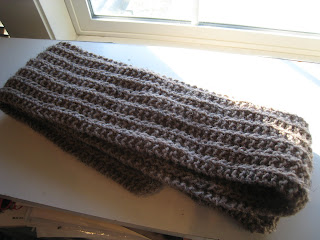 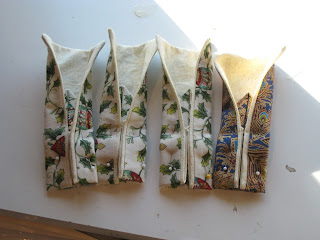 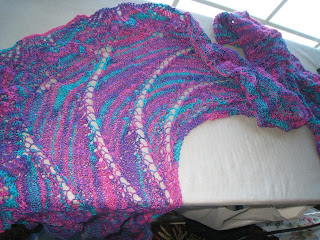 a finished but not blocked begonia swirl shawl, and even 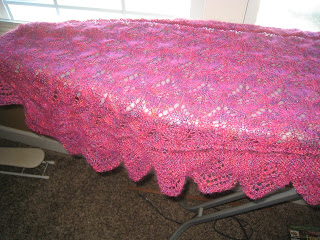 a finished WIP!  This is the Lace Capelet that I started in June of 2013.  It needs to be blocked and I'm still unpicking the waste yarn for a provisional cast on, but it's finished!  And just over the 2 year mark!  And it is yet another lesson in trusting my own judgement.  According to the pattern, you would knit the body and edging separate, SEW the edges of the border together instead of grafting, and then pick up stitches on both the body and border, which you then knit together in a 3-needle bind-off, creating the MAXIMUM possible ends to weave in at the end.  Of course I grafted the edges together because seams just don't ever look good, and I didn't bother to pick up the stitches on the border--I just knit into a stitch as I went and cast off.  There is NO reason for the border to have not been knit on, unless one likes obvious joins on their knitting.  But it's done.

I'd like to say that I went straight on to finish another WIP, 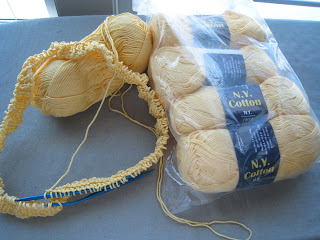 but I didn't.  This is yarn I bought in July just before stepping on the sheep, and I was going to add it to my Reward Yarn Bin, but it's the one yarn I really remember that I bought and why, and I needed a little easy knitting.  Ever since making Sitcom Chic back in 2008, I've wanted another one in light yellow for spring, and I think wanting a project for 7 years means one is actually serious, so in spite of all the sweater quantities I already have, I allowed one sweater-quantity purchase before climbing back on the sheep.  And I'm going to adore this sweater when it's done.  AND I'm thinking it would be a good one for Me Made Mondays next year....

Even all this progress leaves me with 21 projects to go, so 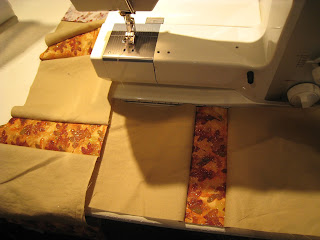 having finally located more of the glittery leaf fabric, I'm making 4 more embroidered fall table runners.  I'm using a darker background fabric this time--mostly because I could find it--but I think it will look nice, and I'm going to try a different leaf pattern on at least one of them.

I also thought that, after the practice with the lollipops, it was time to try a fabric-covered rope bowl with the leftover fabric I had saved from the first three spicy spiral runners, 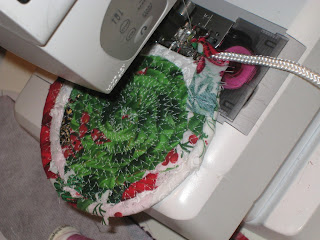 and here's a little tip:  thin strips of fabric strips might only be held together by one or two stitches, which will come apart REALLY easily when trying to wind them around rope.  Might have been good to know BEFORE starting, but because of the way this works, I'm going to just stitch straight down the strips to secure them before trying to wind them--and make them into longer strips in the process.
The additional stitching won't really be visible, and will cut down on the swearing immensely........ Or, until I learn that this theory won't work either................
Posted by Toni at 10:03 AM 4 comments:

The Top Is Done 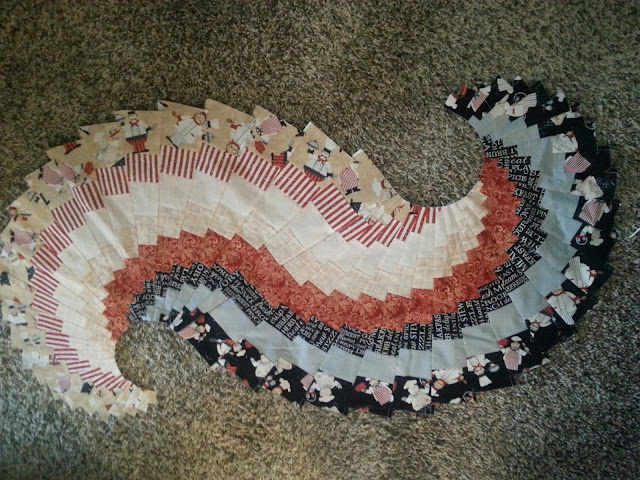 And I'm pleased.  I may not like it quite as much as the Christmas ones, but I think it's fun.  AND, I did manage to get all the pieces cut out, even if it did take quite a bit longer.  Now to attach it to add the batting and backing.  Am I looking a bit frantic yet?

But one of us thought everyone should be up before 5:00 this morning. On a Saturday. 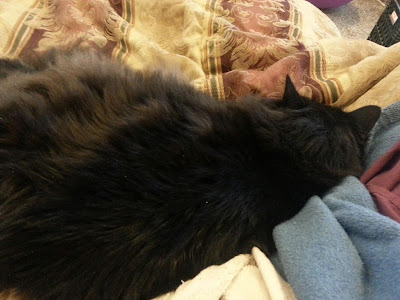 Andy and Theo, of course, were both able to go back to sleep, but once I'm awake, I'm usually up for the day.  And I might have spent part of that extra time trying to figure out how to make 25 projects by the end of the year.  Just part of it--I have also been knitting furiously on the begonia shawl.  I'm on row 85 of 92 (albeit really LONG rows), so I have hopes of finishing it soon.  Then maybe a quick chemo cap, and maybe some new embroidered towels for hostess gifts, as I do go through them pretty quickly during the holidays.  If I could come up with just a few quick projects to get myself back on track, I still think I could reach 115 projects for the year.  And if we count the extra hour of knitting each morning until Theo figures out the recent time change, I could still do this.......
Posted by Toni at 8:52 AM No comments:

Less than 2 months left in the year and I need to finish 25 more projects. Um, it might be time to start panicking just a bit....

I finished the 3 in-progress table runners, 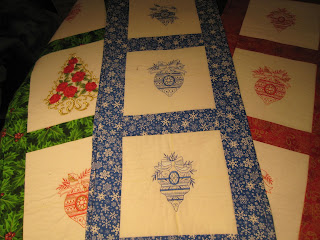 and while it is hardly the speediest project, decided to start cutting the next spicy spiral table runner: 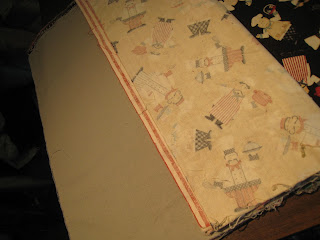 I kept playing with the fabrics, trying to decide the best layout, then was stressing over the fact that even though the set of fabric quarters from Craft Warehouse was fairly expensive, they weren't all actually a full 18" by 22", nor were they all cut straight.  But, they WERE expensive, and it was either use them or let them sit forever, so 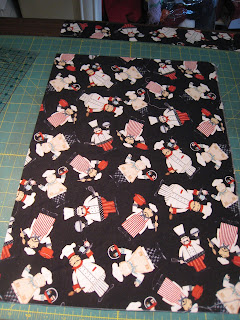 without double-checking my last attempt at laying them out, I'm doing it anyway.  I'm cutting the layers singly to see if I can still squeeze the largest optional wedge out of them, 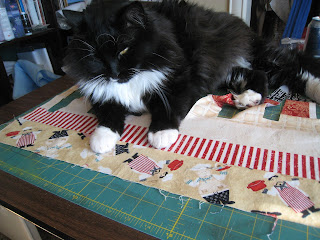 or I would be if I didn't have a "helper."  If I had thought about it, this is not something I'd be attempting while on cold medicine, but I am being very careful to check off each wedge as I cut it, so it could work out without problem.  Or I could stay on the cold medication long enough to think it has.  So, either way is covered........
Posted by Toni at 12:27 PM 2 comments:

My garden is still alive.  That means it should still be October. Early October.  Not November.  I am not ready for November.

I think I have all the table runners finished that we need for Christmas--though even writing that sentence freaks me out a bit, so 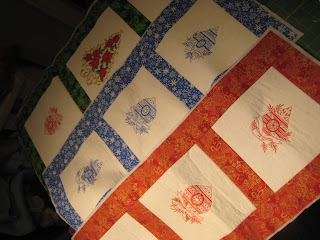 maybe I should finish a couple more, just in case.  It's not that I can't count (usually--when large quantities of knitting stitches aren't involved, in any case), but every year I have forgotten someone or someone new is going to be with us at Christmas or somehow about 10 people get added to the list at the last minute and I'm tearing around like a madwoman trying to find something that doesn't look like a last-minute gift (Chia Pets, chocolates, anything in the "men's executive gifts" category).  But I think I really could be ready this year.  Or I have failed to check my list thoroughly. Anyway.....

My back/hip has been sore since the trip--which is not terribly surprising.  So in addition to cuddling with my sidekick, Theo, I have been working on the Begonia Swirl shawl.  I have reached the edging, but it's unlikely to get sent to the Bin of Doom Project Time-Out Bin for it because it's knitted flat across the body rather than in 1000 rows of 20-40 stitches perpendicular to the rest of the shawl.  I'd like to say I confirmed that before starting the shawl with variegated yarn, 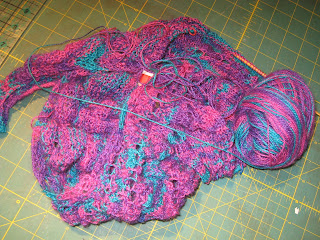 thereby making sure I wouldn't have stripes going one way on the body then the opposite way on the edging, but then again, I'd like it if chocolate didn't make me fat.  One can dream...........

We did have a lovely trip, though it is very nice to be back home, and look! 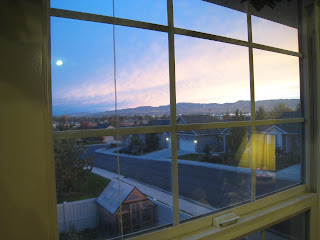 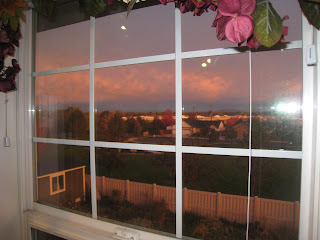 one gets to see the loveliest sunrises and sunsets even without kitty wakeup calls..........
Posted by Toni at 3:15 PM 1 comment: