It has now been 40 days since I last bought fabric, and I think my life just got a bit easier.  I am perhaps a bit of a Nancy's Notions junkie, and when their bi-weekly catalog arrived this week, 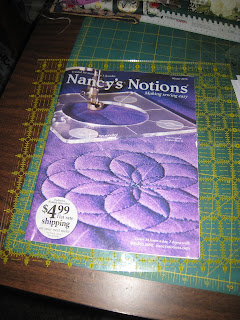 I noticed their free-shipping-with-special-code promotion had been replaced by: 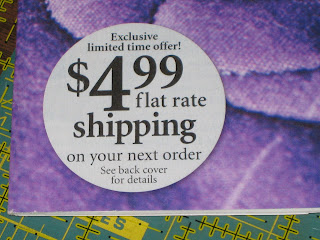 which is a seemingly small thing, but huge for me.  It's so easy to say, "Oh, it's free shipping, so I'll just order this....and maybe that......."  I flipped through the catalog briefly for ideas, but popped it into the recycle bin within 10 minutes of its arrival.  One less temptation to deal with!!!!!!!!!!!!!

Thank heavens, because this week I dug out one of the kits (notice I said "one of") I ordered from Nancy's Notions, and I'm thinking I might now know why the kit was on clearance in the first place. 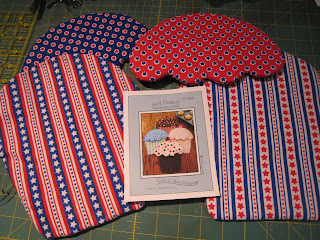 For two lousy oven mitts, I've spent a lot of time with this project.  First, you transfer the pattern to plastic template: 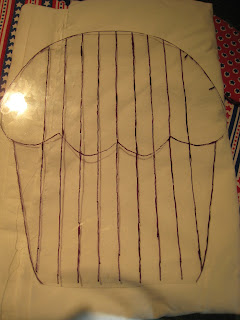 which was a lot easier after I first transferred the silly thing to tracing paper, so there was that entire process before even GETTING to the fun that was the sewing.  I don't know about you, but in my world, if one is going to leave a hole in one of the seams for turning, I like to do it on a spot where the seams are straight, if at all possible--just to make it easier to hide where the gap was.  I also like to make the hole large enough so that whatever I'm turning right-side-out might fit through the opening in less than 45 minutes.  Call me crazy......Two days, much swearing, and lots of begging later--they're still not done, which means that 2 lousy potholders has taken longer than two fleece pullovers and 5 yards of fleece.  What's not to love??????????

This, of course, leaves me with a strong case of Starteritis, and in spite of my resolution to use large amounts of fabric, I found myself eyeing my Christmas music stash: 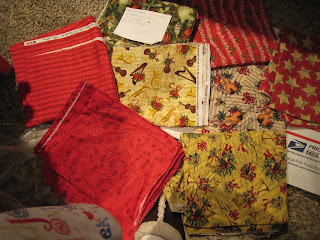 then this lovely crossword puzzle fabric, 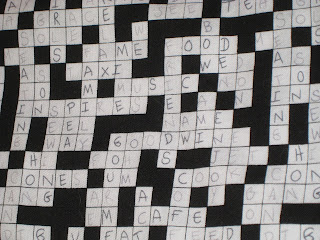 which I was only able to tear myself away from by reminding myself of the greater bulk of the stash: 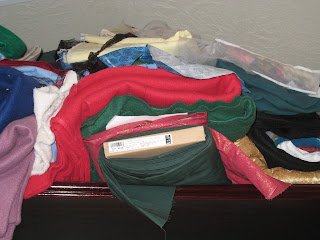 (and that I'm not quite sure how I want the future crossword quilt to look), which lead to a reminder that this: 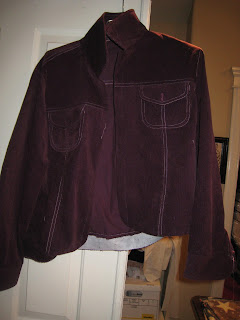 is seriously close to being finished and could qualify as one of my 20 new "Me Made Monday" items if I finished it and got it off my door, and which is now looking FAR less frustrating after the little foray into Cupcake Hell, so it could see some action today.  Reaching 8.5 yards for January is super-motivating, because if I could maintain that as an average, I could use up 100 yards of fabric this year.  I know--I've only managed such a thing in years when I haven't actually been trying, but almost all the fabric stash dates from when we moved into this house or later, and on July 1 we'll have owned this house for 10 years.  There's not a lot of hope for the yarn, but I could reduce the amount of fabric that I'll be celebrating a milestone anniversary with.  That would be nice.  And I don't want my fabric to fade before I get to use it, so there's that as well.  Must sew faster.  And stay away from cupcakes......