Thanks for the well-wishes everyone!  Yesterday was bad again, but today is better--which is pretty much how the bronchitis has gone for the last month.  Sunday night I was still going strong enough to finish this after a rest: 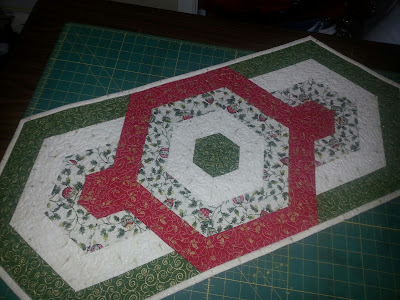 and I have the second one pinned and ready for quilting.  I have the Vicks Vaporizer going in our bedroom to help me breathe, and I think I'm going to move a sewing machine in here this afternoon if I'm still feeling strong enough to be up.  The air is so dry this time of year--I don't even remember when the temperature outside was above freezing--that you could basically sandpaper with my elbows, and the cats keep their ears flattened anytime we reach down to scratch them because of all the static.  I actually love winter, but it certainly has its challenges.

Back Among the Living

Normally, bronchitis will eventually go away--even in my world.  But Wednesday evening, I actually started to feel worse, so Andy took me to the doctor on Christmas eve.  There isn't much they can do for bronchitis, but they gave me an inhaler to help with the congestion, and gave me an antibiotic that I have apparently deprived a horse of enjoying because I was starting to develop a bacterial infection in my lungs.  Well THAT's certainly not what I wanted for Christmas.  The horse pills upset my stomach, but after sleeping most of the last 3 days, I finally felt good enough last night to do some knitting and, 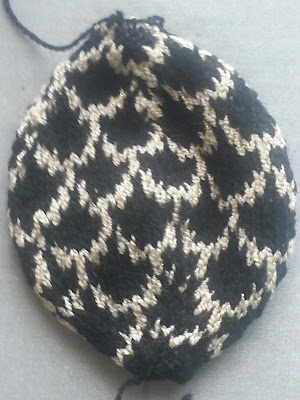 Theo has barely left my side this week 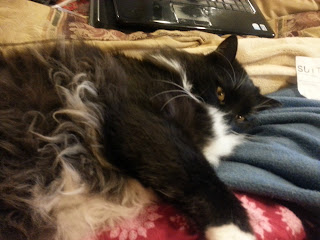 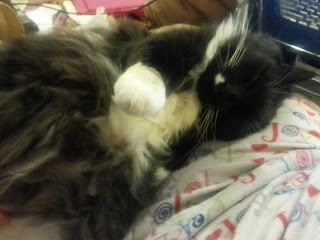 because being Get-Well Kitty is a very serious job.  I think even Theo worries when I don't feel like knitting.  Who wouldn't?

Or Is It Just Me?

Has everyone been receiving daily emails from fabric stores this month, or have I just earned a reputation?

Ten days left in the year, and I need one more finished project.  I have two table runner tops ready, 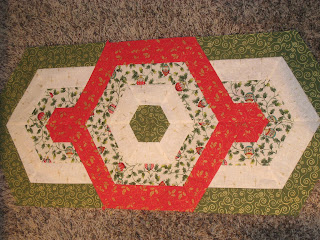 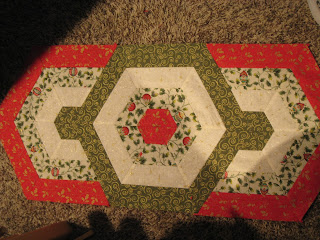 so how could I make them take longer?  By stippling! 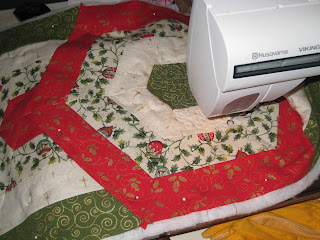 The first top doesn't quite lay as flat as I would like it to, which made other machine-quilting methods a poor idea.  To add to the fun, I'm using polyester batting, which is a bit fluffier than the blends I've been using for free-motion quilting.  Not a high loft--not even I am crazy enough for that.  So far, it's going well, but as you can see, I have a LONG way to go.  Yep, good choice.

There is a back-up plan: 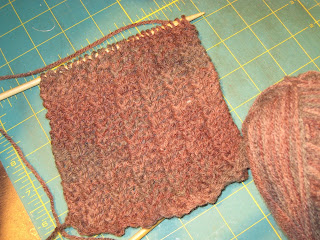 Another 1-row scarf.  I always try to keep a few gifts on-hand because no matter HOW carefully I plan, I always need one or two extra gifts, and the last scarf I finished has been gifted and is already being worn.  So, there is a fast, fairly mindless project for plan B.  And, of course, what I want to do is plan C, which is start an entirely NEW project which wouldn't have even the remotest chance of getting finished.  Because I am an idiot................

There isn't a finished project today.  I was zipping right along there, but I didn't even walk PAST my colorwork project bin yesterday.  We need some time apart.

Yesterday I survived on just one dose of Robitussen, which is enough to make it a good day.  I do not know a curse strong enough for the wretches who came up with the cherry-flavoring for Robitussen.  I thought by now (well, of course, at one point I foolishly thought I'd be better) I would have at least grown used to the horrible stuff, but instead it is getting harder and harder to take, and it is the only thing I've found that calms the coughing.  I even managed a really cold one-mile walk yesterday.  Then 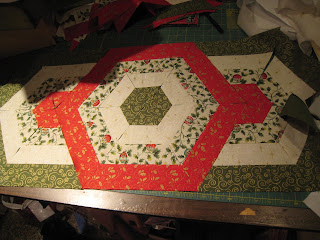 I started a new table runner project.  I've seen pictures of these on Pinterest, and I might be feeling a bit smug that I figured out BEFORE stitching that it might be easier to not stitch all the way to the end. 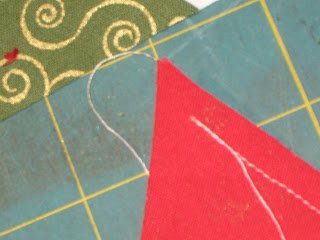 I bought a 60-degree ruler for this especially, but don't remember where I put it.  How do I keep doing this?  I remember it did trim the end points off, but I'm leaving them until I get the general hang of things.  If one does things correctly, one could make this runner from 2 sets of strips.  IF.  Somehow I managed to cut one triangle about 3/8ths of an inch too narrow--a feat so amazing that I still can't decide how I managed it, and while I figured out that I would need 14 triangles, I did NOT figure out that I needed 6 with a red bottom and 8 with green, rather than 7 and 7.  So I'm cutting up 5 strip sets and hoping I manage to put together 2 finished runners when all the thread clears.

Theo was underfoot last night while I was pinning, 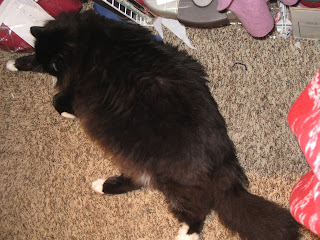 but has better places to nap this morning.  If he's really good maybe I'll let him "help" me cut more fabric strips this evening.
Posted by Toni at 10:10 AM 4 comments: 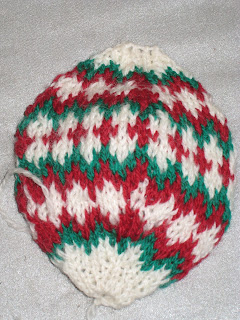 and I cast on the next pattern in the book, 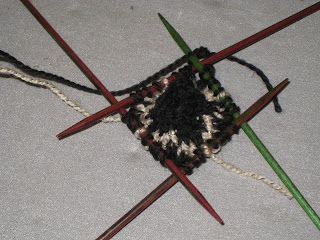 but I am just a wee bit tired of colorwork ornaments.  Maybe a LOT tired of them.  So last night I worked on this instead: 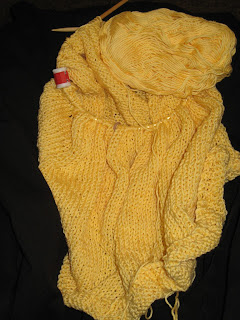 Sitcom Chic IS a fast pattern, though I'm not sure if it's 17-more-days fast.  This one might depend on the bronchitis, which is still hanging on.  I have given up on it going away--now I'm just hoping to find a cough medicine that tastes better than "cherry-flavored" Robitussen.  It is the only thing that really stops the cough, but that is just nasty stuff.  What did cherries ever do to them?
Posted by Toni at 1:29 PM 2 comments: 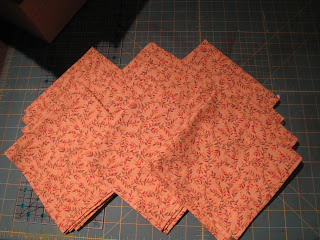 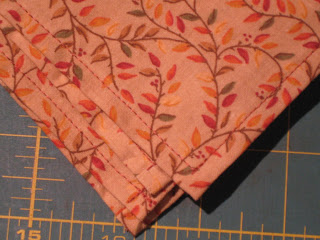 instead of just serged with a rolled edge.  Serging is faster, but I like this look better.  Granted, they might have been finished because I was afraid of misplacing the fabric, and adding three yards of fabric to my tally for the year might have added to the attraction, but they're done!!!!!!!!  Two more to go!  Which explains, 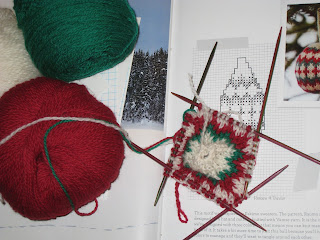 20 days left in the year, I'm actually getting really close to hitting the 115 projects goal for the year, and know what I wanted to do today?  Start a new quilt.  Seriously!

I think the bronchitis has hung on for over a month now--usually not really severe and never bad enough to be pneumonia or anything worse--but I am getting tired of it, not to mention the Robitussen.  It does keep the cough at bay, but is there really anything that tastes as nasty as cherry-flavored cough syrup?

Andy flies home tonight, so I took a slow morning with my coffee and finished this: 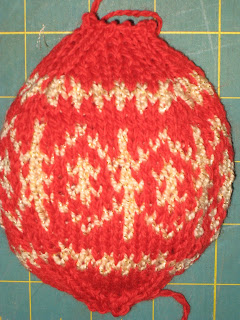 which is project number 112!   I don't like the colors quite as well as the one in sparkly blue and white 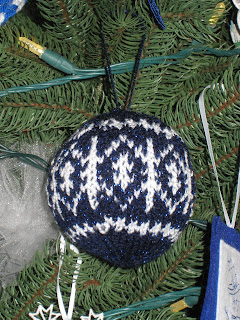 that was Finished Project 104, but I am a bit obsessed with the sparkly blue and white: 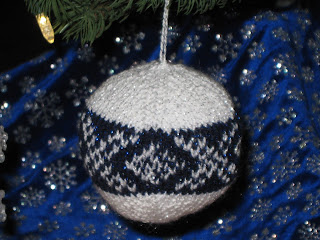 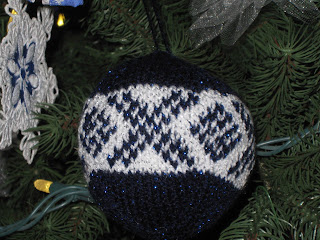 Okay--maybe a LOT obsessed.  As you might have guessed, one of the trees is done in blue and white this year.  The other 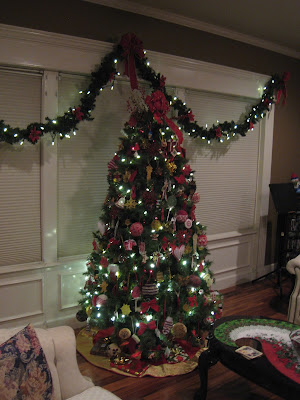 is more traditional--and pretty much has ALL the non-blue ornaments.  And we're using the first stockings I made for us, 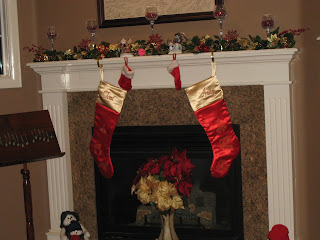 We're not hosting a Christmas party this year, but it's still fun to have the house decorated.

Andy gets back tonight and tomorrow I'll need to get back to wrapping & shipping gifts, working on Christmas cards, and I'm sorting through things to find things we don't need which can be donated, so today is crafting day part 2 and I need THREE more finished projects.  Or I could just get some progress done on the purple corduroy jacket.  Or any of the other "in progress" projects laying about.

Andy is away on business today, so I took a crafting day, and 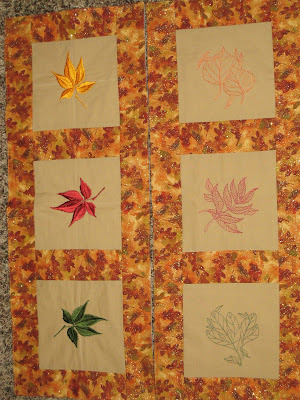 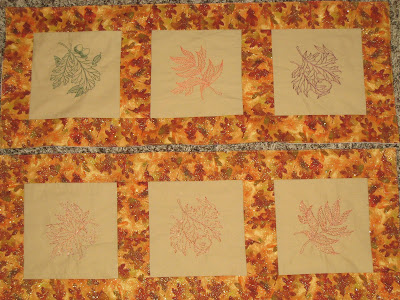 there are FOUR finished fall table runners!  These were started a while ago, but I got tired of trying to get the leaves to stop puckering the fabric because nothing seems to work, so today I found a "redwork" design of leaves to try instead.  I'm not sure I like the look as well, but they definitely work better.   The final one I embroidered with orange metallic thread, which doesn't show up well in pictures, but looks nice in person.   And there are FOUR of them!!!!  Yay!

Last night I finished up another ornament, 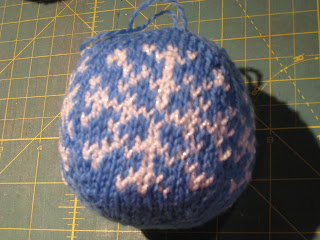 and have another one in progress: 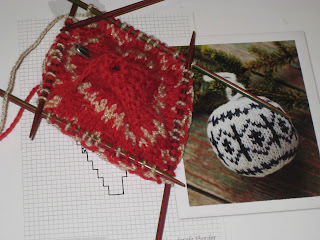 ornaments being small, sometimes-quick-to-finish projects which are my favorites until I get to that 115 number.  AND, while I forgot to get a picture of it, I have finished the lacy bowknot scarf, so I am up to 111 finished projects for the year!!!!!!  And could even get to 112 by the end of the night.  Maybe I'm going to get there after all.........
Posted by Toni at 6:51 PM 2 comments:

The pillow is finished, wrapped, and packed for shipping.  I have a couple more gifts I want to finish, but I swear I am trying to convince myself to not freak out over getting to 115 projects.  Okay, maybe there's a new colorwork ornament in progress, and I might have cast on a new scarflette last night, but I was going to do that anyway and it's not just because it could be finished soon.  I needed a portable knitting project, because December is the Season of Long Waits.  Traffic lights, post office, stores--portable knitting is a MUST.  But I am NOT freaking out.

Where Did THAT Week Go?

I hope everyone had a good holiday weekend.  We spent Thanksgiving with my parents at the ranch,

which was a lot of fun.  Cold, but fun.  Sorry for the extra-large picture, but this was such a great picture that I wanted to share it, and I cannot get it to shrink.  This is where I grew up.  Pretty, isn't it?  The ranch is a partnership between the families of my mother and her twin sister, and my two cousins who also grew up there were visiting as well, so that was really fun.   Andy had his new camera, so he took family pictures of them in several spots on the ranch.  So this is how we spent Black Friday.  :)

It is officially winter here, which includes the obligatory problems with the furnace on the coldest day possible.  High-efficiency furnaces have some issues with condensation, and when too much water builds up, the furnace doesn't kick on.  So yesterday we woke up to single-digit temperatures outside and 51 degrees INSIDE.  Luckily, it's a problem that Andy can fix, but even Theo spent most of the day camped in front of a heating vent.  When the sewing room was finally warm enough, 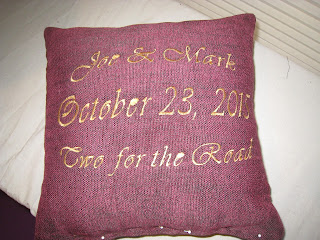 I got one of the last Christmas gifts embroidered and sewn, and now just need to do some hand stitching to finish it.  This will be project 104 for the year, but I still need to finish wrapping and mailing gifts, then write and send our annual Christmas letter.  Plus 2 parties this weekend, two or three next week, 2 friends having surgery......we'll see.  I swear I'm not going to stress over this.  I'm too busy stressing over how badly I need to clean the sewing room.  My crafting table is the perfect height for wrapping gifts as well, so it's reached a whole new level of "disaster."