I was so excited about having today off that I almost forgot about Me Made Monday.  Probably better than forgetting that I had the day off, but I did catch it in time to wear this 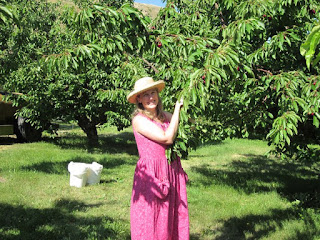 dress today.  The picture is a few years old, but I do know that I haven't worn this dress yet this year.  It is THE best gardening (and cherry picking) dress ever.  I'm not gardening this year, aside from a few pepper plants and two tomatoes that will probably get stunted later in the week by crazy-early 97-degree temperatures anyway, so I didn't feel the need to "save" this for later in the summer.

I had a pretty exhausting week for my back, so no sewing on my day off.  However, aside from needing to trim the fringe, 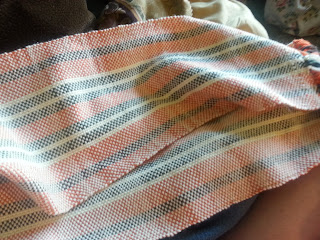 my first weaving project is done!!!!!!!!!!!  It's all wool, so it might not be a great scarf, but maybe it could be a table runner?  I think I caught all the actual mistakes, but there are definitely areas where my weaving is tighter or looser, and I obviously need to work on my edges, but I'm pleased with it for a first project.  Of course, what I am obsessed with is 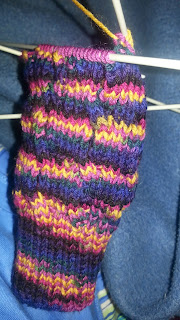 the new sock.  It has been to the ophthalmologist with me, which was maybe not the best choice as I spent the majority of my appointment with bad vision, but I don't think there are any errors.  I took it to work with me on Saturday just in case things were as slow as they were last weekend, and of course, it was probably the busiest day I've had.  I didn't even get out of the store until an hour after we were supposed to close.  So I'm taking it with me tomorrow in case it's some sort of good-luck charm for the store.  :)