In an AMAZING show of self-restraint, Jeeves is NOT listed on Ebay tonight.

Today's recap:  the latest chemo cap having been finished on Wednesday, 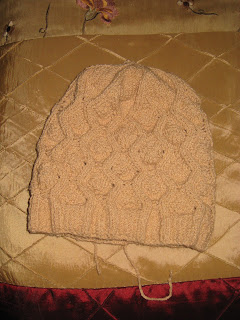 and great progress having been made on the new baby sweater and am just finishing up the front pieces, 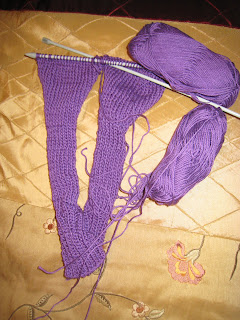 I felt knitting has received enough attention this week that I felt confident devoting Finishing Friday to sewing projects.  Especially since a rare bit of sun coming in the window 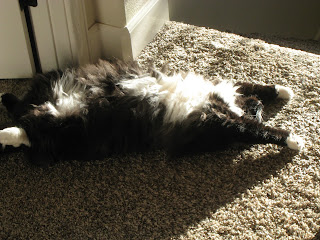 had lured Theo away from my sewing table and I could actually use it for something BESIDES a kitty hangout.  I cut out new pieces for the quilt, 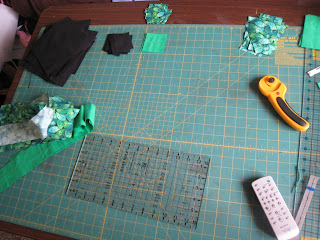 and cut out interfacing for the floral jacket, 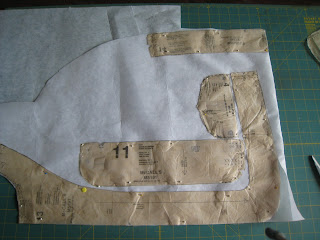 ALL without kitty assistance!  I don't think I've ever had so much time to myself in the sewing room since we adopted Theo.  It was a bit of an odd sensation, but a really productive one.

Earlier this week, I had finally relented and set up Jeeves for a trial run.  Not that I thought that he had been fixed--actually, I knew he hadn't--but with the outstanding incompetence of Holland's Sew Shoppe, I wanted to see if he'd returned with just the same problem or new ones.

As you might remember, the repair guy insisted that--aside from the fact that I had been doing fine for the previous 4 years--that all the problems are being caused by ME not using enough stabilizer.  In spite of the test embroidery they included using only one freakin' piece of stabilizer, 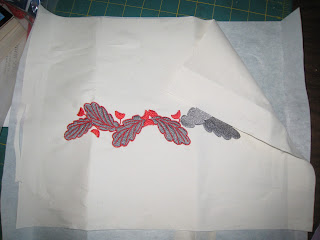 he's patronizing enough to state that I should use several pieces--you know, because my having boobs obviously means that I can't embroider as well as he can, so I should double the stabilizer.  I really, really hate this dealership.  I decided to make gift bags, using only the designs that actually came with the machine, 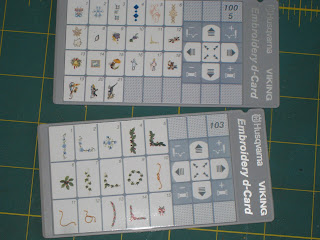 because the fewer excuses the repair jerk has, the better.  And I was able to get several bags embroidered 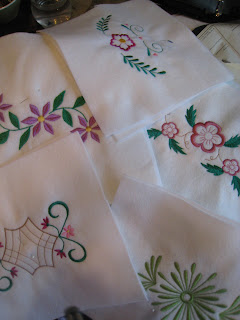 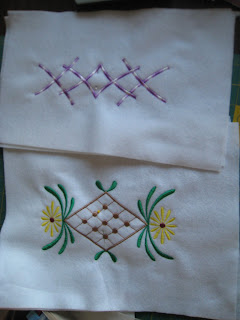 before the exact same problem that Holland's just charged me $60 to "fix" happened again.  The bastards.  I'll be doing more sample embroidery, and will assemble an entire portfolio of examples of the problems to take back to them.  In the meantime, I have emailed Husqvarna to complain, and will be finally contacting the Better Business Bureau.  Really, I don't think I'm asking too much.  If I'm going to be CHARGED for repairs, they should actually try to repair the machine, no matter how big the repair guy's ego is.

I have one bag totally finished, 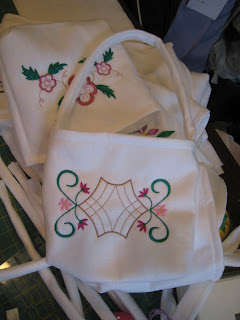 and am just attaching handles to the rest of them.   Jeeves is out of warranty this month (the 5 year electronics warranty.  There's a 20-year mechanical warranty, but that is obviously, to borrow a rather apt phrase, not worth a pitcher of warm spit), but the two cards that were replaced last year each carry a one year warranty, and as this is the same problem that foreshadowed the first card going out, I have a few months to see if the card will fail during the warranty instead of after.  I am compiling a list of things I want to embroider, as Jeeves's days are so obviously numbered and it will be some time before I can afford a new embroidery machine (which will obviously NOT be a Husqvarna).  So, we may end up with 15 years' worth of gift bags, as I'd prefer Jeeves malfunction on felt rather than really nice material, or I may start getting really creative with felt project ideas.  Coasters perhaps?