Well, Why Stop After Just ONE Mistake?

I'll bet you thought there might be a picture of a newly-knitted ornament today, didn't you?  Nope!  It turns out it wasn't enough to do it wrong and have to start over again.  Nope!  I had to restart it a SECOND time, and frankly, we're not on speaking terms right now.

Instead, I decided to "sew" for Finishing Friday, 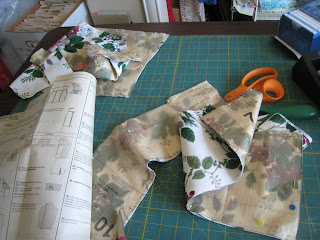 which is in quotation marks because MOST of the crafting time was spent laying out and cutting pattern pieces, which is always the most frustrating part of this jacket.  Or used to be.

It's my own fault, really.  Having made this jacket from this same fabric before, I knew that the regular metal foot was very slippery on the fabric as it's usually treated with something.  Luckily, when I bought Emma on Ebay, 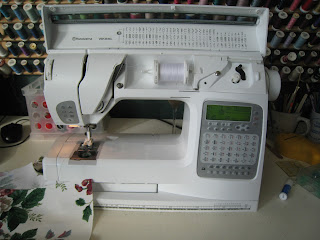 she came with a couple feet I didn't already have, including a Teflon foot: 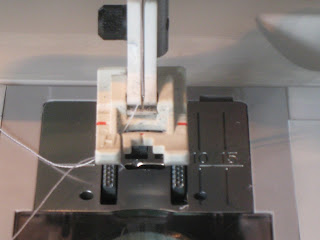 Under normal circumstances, this is supposed to BE more slippery on things like vinyl, but as anyone who has ever made a garment from home decorating fabric will tell you, this fabric is anything BUT normal, so it actually grips a bit better.  I even did some test strips just to make sure, THEN even remembered to take notes of what needle position I was using for the top stitching and edge stitching for each piece, and let me tell you, I was feeling pretty dang smart...........

which is right about when I discovered that I had forgotten to set the tension correctly so after doing the seams, top stitching, and edge stitching on four separate seams, I get to do every single one of them over.