With the last two mitten ornaments: 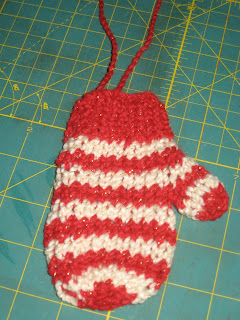 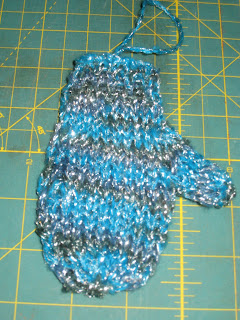 I've reached 35 ornaments for the year.  I really thought I would end up higher with the embroidered ornaments, but I have been sidetracked the last few days by 1. Real life, 2. problems with pain medication, and 3. 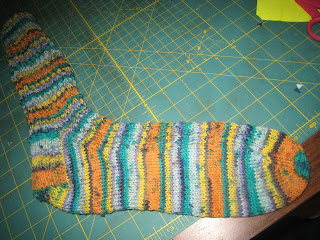 other projects.  I rather wish this yarn didn't have random dots of color in it, but I still like the sock so far, and it's rather exciting to be making a 2013 Christmas gift early.  The second sock is well underway even, so I think I'll have a finished project here soon.

I have been working on the latest sewing project, and last night managed to attach facings and the collar to the two shirt options: 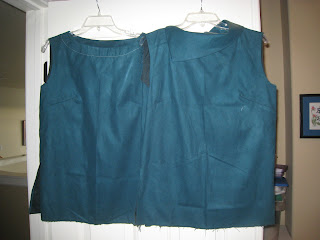 The white stitching on the left is where I basted down the facing, and now I'm supposed to top stitch right beside it.  The problem, of course, is that this never really works for me. Everything is where it should be, but I always find this puckers a bit. Last time I made this pattern I cheated a bit 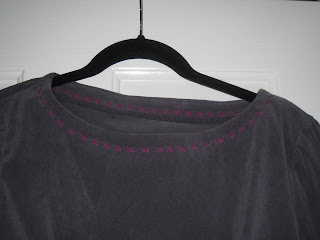 and stitched it down with decorative stitching at a half-way point, which also helped add a bit of color.  This time I'll probably just stitch it down a bit higher up.  The one with the collar will now get short sleeves, and the other long sleeves, so there will be some variety here.  The pants are also underway, and the skirt looks pretty simple, so I'm hoping to be able to add another 5.875 yards to the fabric tally after Finishing Friday tomorrow.  I have no dates for this, but I think the material probably dates from 2006 or 2007, so another big piece of old stash will be used up.  That's rather exciting.  Which is a great segue to the NON exciting totals for the month:

I promised myself that this year I wasn't going to obsess over yardage, which was easier to do before the dismal 538 number, BUT I am on track to sew 100 yards this year, which would probably make a bigger physical difference in the sewing room.  Hm..........maybe a SEWING yardage goal would be okay...............