Okay, Enough With the Triangles! 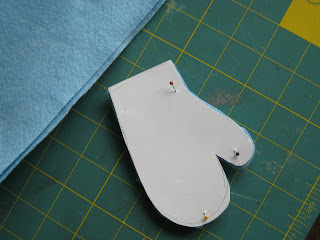 Actually, I wanted to get started on this while I still had the idea in my mind.  I'm making a mitten garland--or at least that is the plan.  I have 4 colors of felt to use--3 blues & a white--and since only one side of each mitten will be visible, I think it will be a great time to experiment with some ideas & techniques.

Theo, of course, is thrilled 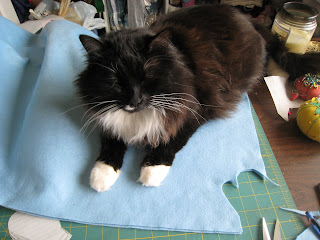 and did his very best yesterday to make cutting out the mittens as difficult as possible: 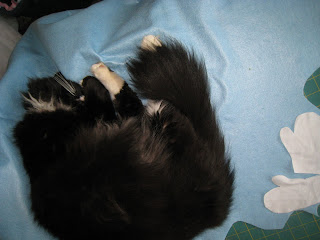 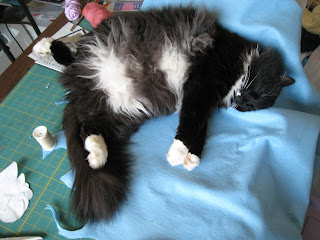 I couldn't even distract him with a little scarf blocking 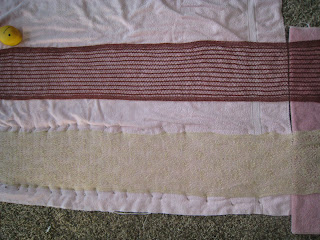 so I think I have my very first furless scarves EVER.  I'm still in shock.  In spite of my sidekick 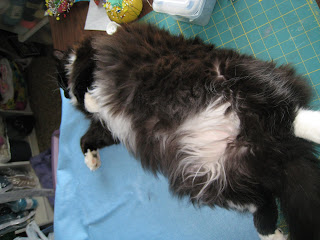 I now have 18 mittens cut out. 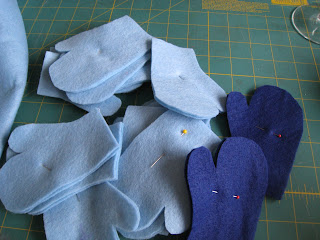 I have no idea how many I'll actually want, so I thought for once it would be safe to err on the "lots and lots" side.  My arm is still sore, though yesterday it didn't bother me to use scissors.  It does, however, hurt a lot today, so I have spent some time putting together a "project box" for this 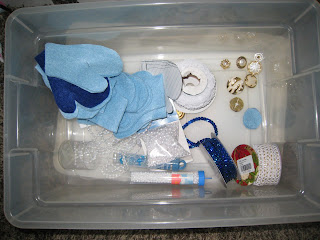 an idea that has only recently occurred to me.  I thought a project might be easier to work on if I didn't have to hunt all over the sewing room for the parts every time I had a spare moment or two.  (I'm sure other people wouldn't have needed to lose an entire pajama top or a few pages out of pattern instructions to figure that one out, but today I am choosing to embrace my cluelessness and be thankful I've at least thought of it NOW.)

Each mitten can be different, so Theo & I sorted out some decorative buttons to use on a few. 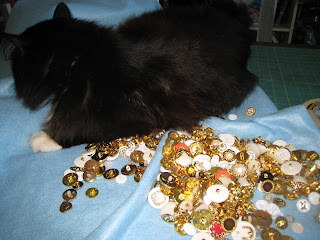 I found a big tub of very cheap buttons somewhere--nothing I would ever use for actual clothes, but these have been amazingly useful for craft projects.  I picked out things I thought would look good, and we've started our first mitten.  Turns out, sewing buttons on left-handed is much easier than trying to do a decorative stitch left-handed 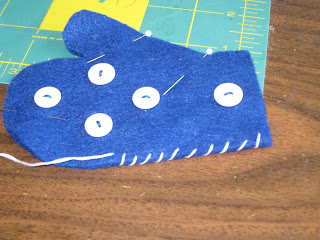 and my first attempt looked rather sad.  It will be interesting to see which happens first:  left-handed proficiency or my arm healing because I have FINALLY really started resting it. 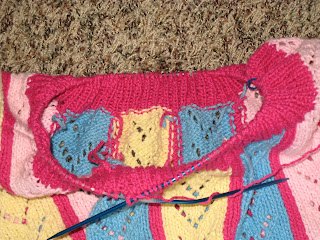 This is very exciting for me.  I ripped back the entire neck, and did a K2tog every 6 stitches.  It's hard to really estimate how big the neck should be, but going from 190 stitches to 160 stitches ought to help a great deal.  I should have done this YEARS ago because I have probably only worn this sweater once or twice and I have always really liked it in general (except for that flashing-the-neighborhood part), so after 20 years, it will finally (hopefully) be wearable!