The green scarf is done! 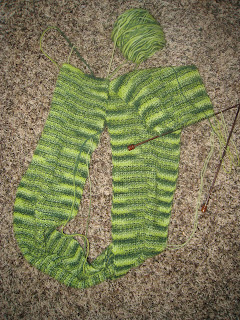 (ok, same picture as last time, but just imagine it longer & without the needles)

And the soothing effect of the moss stitch pretty much evaporated on the second half of the scarf because I was so obsessed with excited about finishing it. That puts me over 5000 yards for the year. Whoo hoo!!!!

And I would like you to meet my new best friend: 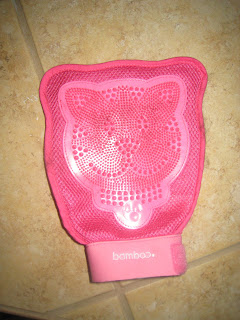 Ever since Theo's water torture/therapy, he's had a lot of problems with hairballs--which probably makes sense given how much he licked himself during the whole ordeal. I tried all sorts of "natural" remedies--like adding pureed pumpkin to his food, which being a cat he wouldn't eat. Then I found this stuff: 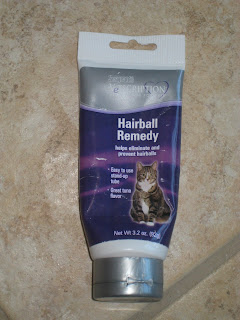 It's supposed to be tuna-flavored, and they suggest putting a one-inch ribbon of this stuff on your finger & having your cat lick it off--a suggestion obviously written by a dog owner. The second suggestion is to smear the gunk onto the cat's front paw & have the cat lick it off. What they leave out is that EVEN THOUGH this stuff is sticky & will be really hard to get off your finger, putting it on a cat's front paw will cause the cat to flip and buck, which will cause this sticky goo to launch into the air and adhere itself to the nearest hard-to-clean surface. Smearing it into the cat's fur will only anger the cat and doesn't seem to affect the ability to flick the goo onto walls. Repeating this ordeal daily will clear up the hairballs, but makes for one angry kitty.

Of course, the best option is to eliminate the hairballs instead of treating them, but Theo hates to be brushed. The ladies doing physical therapy with him were able to brush him & said he even purred when they did it, but they were dunking him in a water tank twice a day, so he would probably have purred at ANYTHING they did that didn't involve the water tank. I was almost desperate enough to start dunking him in a tank twice a day, and then I found this lovely mitt.

Provided he doesn't actually see the mitt, he loves to be rubbed with it. As soon as he sees it, however, he attacks it. It's only been a couple days so I don't know if this is actually going to solve the problem, but at least it's been a nice break from the bucking, goo-flinging kitty show....