The Right Wool Can Overcome Heat 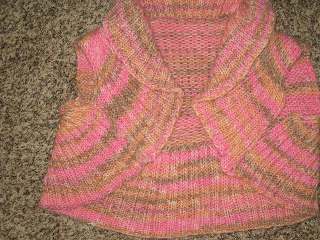 I still love this project.  To be fair, it wasn't until after I started it that I discovered that the "yarn needed" notes on Ravelry aren't accurate, so I made a shorter shrug than the pattern called for, and if it looks odd on the right, it's because my mattress stitching there is so wonky that I'll be ripping it out and starting over, so it's only partially done.  BUT it still counts as finished sweater number FIVE.  Yay!!!!!!!!!!  When we get out of the perpetual state of sweat, I might even be willing to try it on.  It's supposed to "only" get to 104 today.  Whew!  Good thing I have wool in such a break from heat!

Aside from having a new finished sweater, I am tremendously proud of myself for this sweater because I used gift yarn for it.  I struggle with using up any really great yarn in my stash--you know, because then I won't have the yarn any more--but I become a positive maniac over gift yarn.  RobinH sent this luscious, squishy yarn to me more than a year ago, and it has taken me this long to use it because I didn't want the yarn to be all gone.  Thankfully, the Great Sewing Room project helped put the yarn supply in perspective--and ending up with a great sweater, which I have room for, rather than great yarn, which I don't, might have been a factor.  Now I just have to wait for winter!

With a finished sweater, you might have thought I'd rush out immediately and start another one, wouldn't you?  Well, 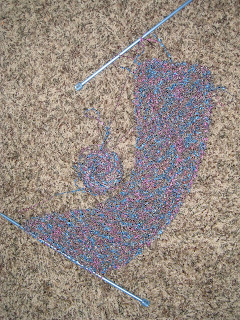