It's been a pretty hectic month or two here, so when an opportunity came up to get out of town for a few days, I jumped at the chance.  Theo may never speak to me again, but Thursday I packed up Bernie, some knitting projects, and a few less-necessary things like clothes and headed out for some ALONE time.

Now, this would have been a perfect WIP-reducing weekend.  Instead, I made a second white chemo cap, 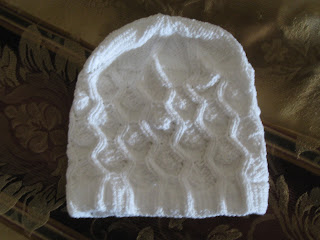 which, of course, looks EXACTLY like the last one and would have been a very boring thing to be knitting IF finishing it didn't mean that I could move the stash of white stretchy yarn to the "all used up" tab in Ravelry, which brings me to 34!  (Did I actually set 150 as my goal???????)

You might think I would be getting tired of chemo caps by now, but they keep finding their way to new owners and I still have a few balls of the yarn to use up, so 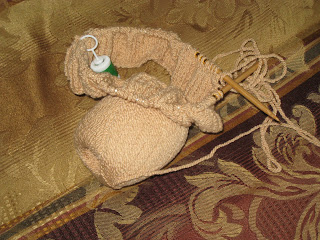 That's right!  It's like the movie Groundhog Day only with chemo caps.  The same thing over and over and over, but without any rodents.  Which is probably for the best.

Did I take along Andy's sweater or the Pi shawl or any of the existing WIPs?  Of course not.  I took 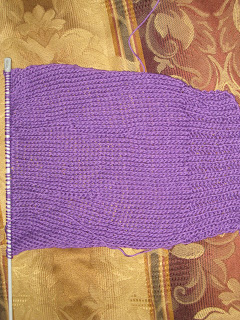 a new baby sweater.  One of my cousins and his wife are expecting their first baby, so I thought the Baby Reefer jacket in purple would make a nice, gender-neutral gift, though the double-breasted buttons might make it a bit more feminine than masculine.  I tend to be of the opinion that it shouldn't matter, but I have discovered that this opinion is rarely shared by the fathers of little boys.  I've never worked out how certain shades of lavender or green threaten anyone's masculinity--nor exactly whose masculinity is being threatened by non-blue colors in the first place, but this seems to be a big thing.  Still, it's a cute sweater pattern, and if the end result doesn't look machismo enough for someone who is still breast-feeding to wear, I'll put it in the baby gift bin to await a girl baby or a more secure father....whichever comes first.

I have started with the sleeve, as those are usually my least favorite part to knit, and managed to miss a line in the instructions telling me to add 6 stitches when I change to stockinette.  Oh well.  It will still work and I'll just make the same mistake on the second sleeve so they will match.  It's probably going to be a good thing in the end, as I am making this with just a little less yarn than the pattern calls for, so a slightly narrower sleeve will save some yarn, which is good as this yarn has been in stash for a few years and would be pretty difficult to match in any way--which, apart from potential suffocation from a stash avalanche, is the biggest risk for a yarn stash.

When one is trying to finish 111 projects in one year, simple projects that are easy to complete are REALLY the best idea.  So, of course, I started a new quilt: 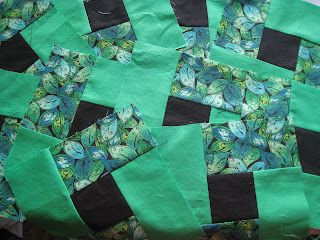 I now have 30+ of these squares, and if I do the size of quilt in the book, I need 63 or 64 of this block.  There's a block that goes between each of them, and some special side blocks that I need to do, so I think I'll be deciding the size of the quilt by my tolerance for doing the blocks, but so far it might be a full-sized quilt.  I love how the green and the leaf print go together, and if I weren't on a fabric ban would probably have rushed to Joann's to stockpile more of the leaf fabric--which explains the need for the fabric ban.  Funny how that works.

And, remember my asking you to step in and bring me to my senses if I ever decided to make that pink jacket again? 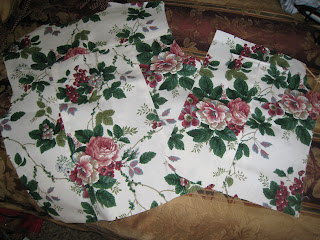 Too late!  I am actually making a second one, but this time using home decorating fabric.  Obviously, weekends away are NOT good for whatever grasp on reality that I might have had.  Triple seams combined with dry-clean only fabric--what's not to love???