I took the last antibiotic yesterday, and until 2 days ago, I really thought I was going to have to go back to the doctor because the bronchitis was still hanging on, but I've had 3 good days in a row now and, while I'm weak, I am finally able to breathe normally.  To celebrate, we visited 2 different sets of friends yesterday--what a great way to spend a day!  One of our friends has been very ill and because of the bronchitis, I had to stay away from him, but this weekend I made a big batch of soup and Andy made bread and we got to spend a couple hours with one of our favorite couples.  Then we stopped by another house to deliver a late Christmas gift, deliver some of my old toys we'd brought back from the ranch, and get caught up with another favorite couple.  TODAY I am taking soup and a Christmas gift to a friend recovering from surgery.  I had a fairly lousy Christmas, but the new year is pretty lovely so far.

And it's MONDAY!  Currently, I'm in my homemade flannel pajamas, but I am going to wear this: 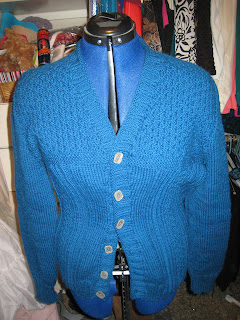 from the 2010 Ravelympics.   I have worn it several times, so it might have made sense to start with a sweater that gets less attention, except that this is a pretty warm sweater and 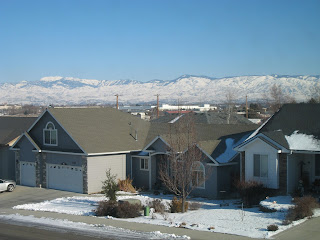 our cold temperatures might be ending today.  This is a picture of what 7 degrees looked like here over the weekend.  We went for a one-mile walk, which is just enough time to lose feeling in one's face.  Today we'll get above freezing, and last year it got warm in February, so some of the heaviest sweaters may not be participating in Me Made Mondays.  The purple corduroy jacket would be appropriate today, except, 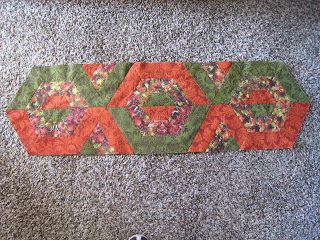 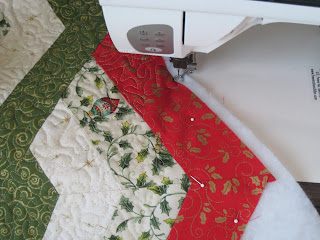 I'm still playing with table runners.  The top one is a new pattern I got for Christmas, which uses 3 stripes rather than 4, and I'm more than half-finished with the free motion quilting of the second 4-stripe runner (and have a set of stripes ready to go for YET ANOTHER one, plus another set picked out, so there seems to be a bit of an obsession developing), so I haven't gotten back to garment sewing yet.  I had intended to use the last week of the year as a sewing vacation, but being sick put an end to that, so I'll try to have some extra sewing time this week and next to make up for it.

Me Made Monday is responsible for this: 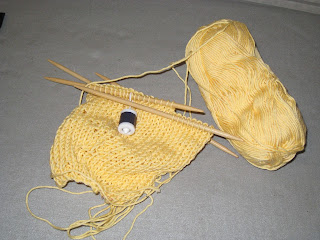 I came REALLY close to casting on a new pair of socks or a scarf over the weekend, but instead I started the first sleeve for the spring Sitcom Chic sweater.  If I behave myself, this could be ready for March or even late February if I REALLY behave myself.

Speaking of not so much behaving........I have joined a 2016 Austerity Quilting challenge, which basically means buying NO fabric this year.  I don't think I've managed an entire year without buying fabric, but I am going to try.  Especially because there might have been a little year-end fabric shopping to add some specific fabrics to the stash, and it's always easier to talk about fabric resolutions when there's fabric on its way to you via the mail..........But I'm going to try, and if I ACTUALLY make it, with focusing on sewing garments AND no additional fabric or yarn, I might have a less frightening sewing room by the end of the year.