I am crafting today: working on the flannel shirt, 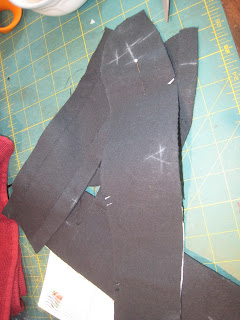 then maybe the pink sweater which is now all the way to the sleeves, 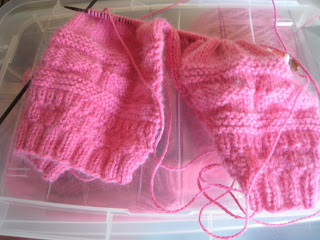 and enjoying the sunshine, 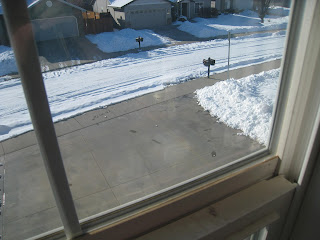 and not have to shovel today.  And I'm spending time with all you wonderful crafters who visit each other's blogs and say nice things and make lovely craft items.  This is a nice world.

And then there's the not-so-nice one.  A friend of mine is running for DNC chair, and while anyone who steps up to run for office should be applauded because it's a lot of work and there's often no reward and no thanks, I was kind of trying to lay low and not have anything to do with it.  Kudos to her for running, but a DNC chair from Idaho would be like and RNC chair from Hawaii or whatever other state hasn't elected a statewide Republican in 20 years--maybe NOT your expert on building a successful organization.  However, when I logged on to social media this morning, I had a message that Breitbart had done a story attacking her and their readers were harassing her via her personal page on Facebook (when did we become this?).  So, I read what they said she had said, then went looking for the actual clip as Breitbart is not an actual news agency and can say whatever they want.  And then decided that, not only can I not help, I think her statement was in poor judgment, even in context.

When you work on political campaigns, no matter how hard you prep and coach and polish and draft speeches, everyone has experienced that moment when your candidate goes "off the cuff," and you hear words you never even thought you'd hear and you spend the evening consuming copious of adult beverages and swearing that the next candidate you work for will be a mute with no personal life.  It happens.  In the 1980s, Ronald Reagan perfected the use of sound-bites.  He really changed the game at that point, and from then on, everything was about the Sound Bite ("Read my lips: no new taxes," "You, sir, are no JFK," "Mr. Gorbachev, tear down that wall," ), then with social media came memes, but the one thing that stays constant: only a snippet of what you say will ever be seen or heard by most, and this is both a tool (sort of) and a really big danger. So while I understand that she was trying to address the racism in the democratic party itself, because of the words she chose as of 5:00 PM our time, she has over 650 messages of hate on her Facebook page, has already been trashed by Rush Limbaugh, and if I were better at Twitter, I'd know how bad that was as well.  I know this isn't limited to one side--this is just the only time I've seen this behavior up close, and if it weren't for crafting blogs and Ravelry, I would honestly say that I think social media is the worst thing that ever happened to humanity.  What have we become?