Which is totally lacking the alliterative neatness of Finishing Friday, but some weeks I'll take what I can get.  What it is lacking in alliteration, however, it makes up for in productivity.  First up: 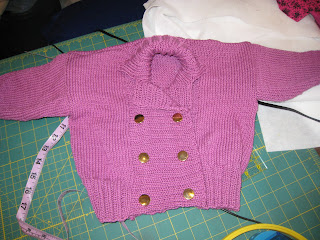 The baby reefer jacket is done!!!!!!  Well, almost.  Those buttons aren't actually sewn on yet, but even though I can get distracted at almost any other point on a sweater, being distracted enough to not sew buttons on hasn't been a problem.  So, it is finished enough to make the list.  And secondly....

Now that the sewing room is overrun with machines, space is seriously at a premium, so I have decided to focus on space-saving projects for a while.  This 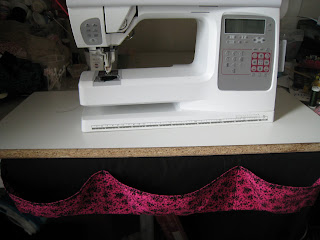 is my first storage idea.  I think it will be a great place to store my seam rippers (notice the plural), embroidery scissors, screw drivers, and other things that I need to have on-hand while sewing.  It was really a quick project, too.  After measuring I decided I needed 2 pieces of black material 25" by 18", then stuck some fusible fleece to the top layer 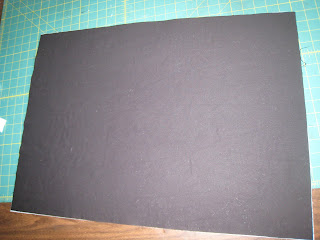 then for the pockets I knew I wanted two longer pieces because I wanted the pockets to "bulge" for easy access, so I cut two 5" by 30" strips of the pink.  I sewed them together at one long edge using 1/4-inch seams, then pressed the seam to the inside, and I did decorative stitching across the edge for fun, but topstitching would have been fine.  Then I pinned the pink to the piece of black with the fleece, putting two small "tucks" in for each pocket 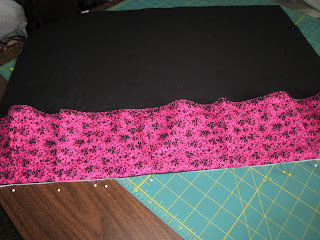 then basted the pockets on.  I also stitched the seams in to form the pockets, then with right sides together, pinned the other piece of black material to this one and stitched a half-inch seam allowance almost all the way around the square, leaving about a 3-inch opening so I could turn it right side out.  Then I pressed it and slip-stitched the opening closed, and top-stitched about 3/8-inch from the edge on the sides & top.  I think the whole thing took less than an hour.

AND NOW THAT I HAVE FINISHED TWO MORE PROJECTS, I'LL FEEL NO GUILT AT ALL ABOUT CASTING ON ONE OF THOSE LACE SCARVES!!!!!!!!!!!