And After The Party, The Gifts

Surprisingly, my back was fine yesterday even though it was hurting by the end of the party, so I got to spend some time working on the 3 (I think) remaining Christmas gifts.

With my trusty sidekick almost with me, 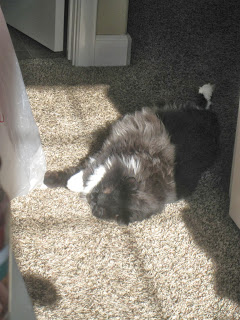 I dug (not an exaggeration)  out a spot on the cutting table in order to have room to cut out a new bag, when I remembered 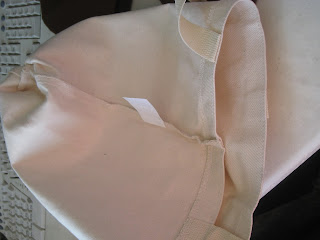 the canvas bags I'd bought YEARS ago before I realized that one wouldn't actually be able to embroider on bags already made.  One CAN, however, 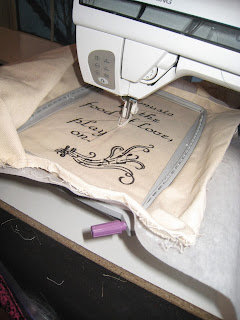 embroider them after ripping out a seam.  These have webbing for the handles, which is probably stronger than fabric and yet another thing I forgot to get, so I'm hoping it's a bit stronger than the ones I make.  I have an idea for a modified sashiko design for bags that I've been mulling over, but that is going to have to wait until the gifts and holiday letter are done.

While Jeeves was busy embroidering, 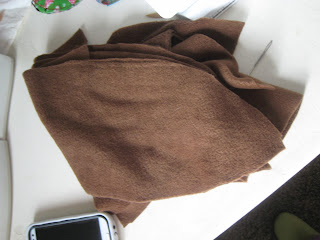 I dug out fleece football pillows.  I had cut these out last year when I made 3 of them for a political fundraiser (of which I don't seem to have any pictures), thinking I'd finish them later in the year for gifts.  But after turning our lives upside-down for my parents during my dad's illness last fall, I had done so much damage to my back that it was worse in some ways than it had been the year before, and there's no way I could have done any sewing for last Christmas.  Luckily, I still knew where they were and they'll be great gifts for this year.

Have you ever made a project once, then gone back to do it the exact same way and had it NOT work?
I suppose by now I shouldn't be surprised by this because the Crafting Gods are evil bastards, but really, once you've made THREE of something, it really shouldn't be possible for numbers 4 and 5 to stump you.  This should be a Universal Crafting Law, don't you think? 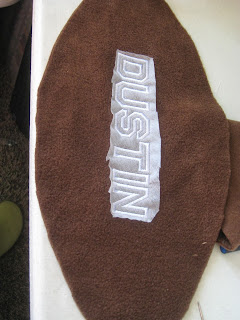 I got them laid out and embroidered with no problems whatsoever, sewed the first two pieces together, marked for the laces..............and hit a wall.

Now I even know how I put the laces on.   I used ribbon, threaded it into a large needle, and poked the end through the fleece.  For all three pillows.  Two needles and much swearing later, I had finally gotten ONE lace in place.  Out of five.  Either I used some form of needle that I no longer own or I have about 1/3 of the muscles I had last year, but I just could NOT get it to work.  Finally I decided to just fold over the ends and stitch them down, but this isn't quite as easy as it sounds, because the surface will be curved, not flat, so if the laces were stitched, they had to be stitched while CURVED.

Now if we were televised-sport people, we might own something that is shaped like a football--like even a real football.  But, being the odd sort who think that sports are something people DO rather than WATCH, we own things like tennis rackets, in-line skates, kayaks, and skis, none of which are helpful in these moments.  Luckily, 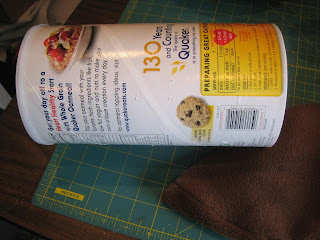 I did have an oatmeal container in the sewing room (long story).  It's not perfect, but I could pin the ribbon to it while putting them in place because glue didn't work that well.   Which is why 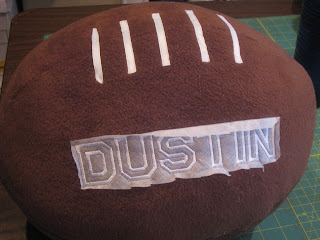 after a day mostly spent crafting, I am showing you ONE finished gift, not three.  I'm steeling myself to tackle the second one today.  Thank heavens are only two of them!  Sewing is supposed to be my FAST hobby................