The blue sweater is now all one piece and the raglan sleeve shaping has begun, 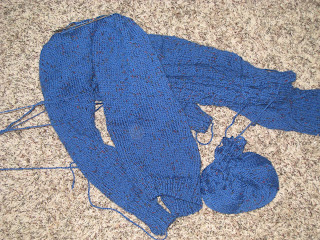 which has used up no less than THREE 175-yard balls of yarn, leaving me just short of 4,000 yards of yarn for the year so far.  That does, of course, include the chucking of 880 yards in the form of a shawl with issues, but it also includes a ball of yarn that didn't count because it had already been knit and frogged once before and has to be frogged and reknit again, so it almost balances out.  Whew!  And that 3 ball difference is going to make such  a difference when trying to get all the yarn back INTO the sewing room...........

Which, by the way, is painted! 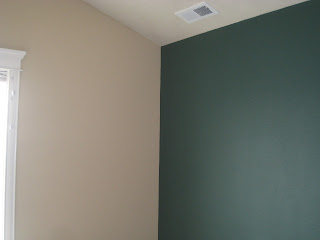 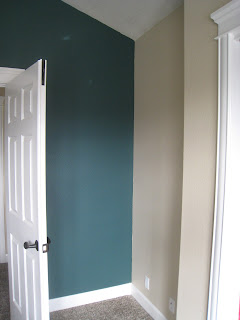 The odd smudges on the green wall are either reflections of something or something on the lens, not actually on the wall.  2 green walls and two in "dried stem."  I just love how it turned out.

While everything (mostly) is out of the sewing room, we decided it would be a good time for me to play around with desk arrangements.  So far, my sewing "desk" involves 2 folding tables, a card table, and two pieces of plywood because sewing machines are too heavy for Costco's plastic folding tables--a shock to no one who has ever lifted a serger, I'm sure.  I'm hoping I can do some sort of U-shape (borrowing the folding table we actually use for parties) that will allow me to have all 3 sewing machines AND the serger set up.  If it DOES work, I'm not sure if I'll want to stick with them being tables--which can always have storage tubs underneath them--or a real desk of some sort, which could have drawers.  I've ruled out traditional sewing furniture.  They're nice, but I don't need them to fold back up and would, frankly, NEVER fold up the cabinets, so it would just be a waste of space and money.  Having married MacGuyver, there are also options to make sewing furniture if I can figure out what I want or to add a lifting mechanism to a regular desk to allow  one of the machines to drop so the sewing surface is flush with the table.  All good options, but it has taken me 5 years to decide I wanted one wall full of shelves.  Well, 5 years and counting because now Andy came up with the idea of making one shelf 30 inches in height to allow me to store my bolts of interfacing and I'm still debating it.  Really, I do have decision making capabilities, I swear--they just seem to have been worn out with decisions on which yarn to buy..........

What does everyone else have in their sewing rooms?
Posted by Toni at 1:38 PM 6 comments: