Since there could be no sewing, late last night I got the latest ostrich plume scarf done 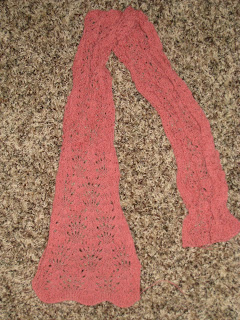 which currently looks a little ramen-noodle-ish, but should be quite marvelous when blocked.

I had hoped to pick up Jeeves today, and since I couldn't, I consoled myself with this 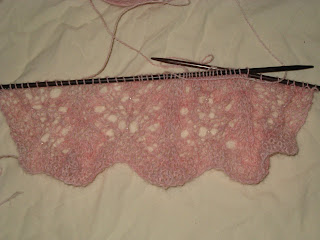 Yes!  It's another ostrich plume scarf!  Though this time with little white seed beads--which you probably can't see as they never show up in pictures, but they're there on every-other pattern row.

I'm sure it will be a lovely scarf & will make a nice gift for someone, but the light pink is just a little too girly, so I decided to cast on a wool scarf as well 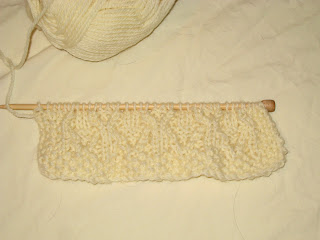 I'm using the leftover yarn from my January Aran sweater which shows stitch definition well.  I'm using something called the "wickerwork pattern" from the second Barbara Walker treasury.  It's not a pattern I would normally use, but I think it will make a nice scarf.

Hopefully Jeeves can come home Thursday.  If not, I hate to think how many scarves I'll have cast on by then........