Getting Down To The Wire

The spending ban is almost over (October 31 at midnight, but who's counting?), and it's actually getting a bit harder.  I am SO close that it almost just seems silly that in two weeks it will be okay but it isn't now.  Yesterday we met a friend to go prowl antique and thrift stores, and I ran across 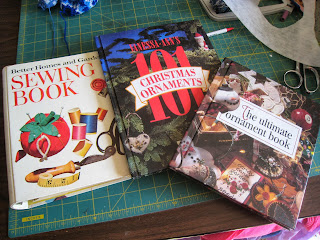 I don't know if you've examined sewing books at any length, but the more recent ones aren't really very helpful.  I suppose they might be if you're a beginner, or sew very simple things, but I sew clothes.  While I would not dare to call myself an expert or even an intermediate, I have run into issues and questions that are just more advanced than I can find.  The sewing book--which helpfully is even a three ring binder that will stay open--was published in 1961 originally and updated in 1970, so it's for an era when people made more of their clothing.  I had placed 3 books on my wishlist on Amazon to order on November 1 to hopefully find this information, but there it was--right in front of me where I could look at it and make sure it would be helpful, it was a local store, and it was even on sale.  And two Christmas ornament books that had patterns I didn't already have. With only two weeks to go, it seemed really stupid to drive back over later hoping they'd still be there, so I made a compromise with myself.  I bought them, and have put them away until November 1.  Rather cheating a bit, and not an exception I would make for the problem areas (fabric) or even thread because they're always available, but I'm just so thrilled over finding them that I'm not feeling too guilty.