Why Knitting From Stash is Better Than Buying Yarn

1. You are less likely to become known to the moth community as THE place to be.

2. All those rubber tubs and boxes could be used for something else.

3. It's like living in your own private yarn store where shoplifting is allowed

4. Other knitters will admire and fear you

5. It will shock your spouse

6. You can use all that shopping time as extra knitting time

7. We are no longer artificially inflating the demand in the yarn market. Look what happened to real estate, after all.

8. Think of the liability if your stash fell on someone and smothered her.

9. The longer you put off facing those 80s fluorescent acrylic yarns the worse it will get

10. It's too hard to catalog it all for homeowner's insurance

11. Some people have closets that hold things BESIDES yarn. (I know! Go figure...)

The first yarn to arrive from my one-day yarn-buying windows was the Knitpicks order. For her retirement gift, my mother picked a shawl in white/cream/natural, and wouldn't you believe it--in that big pile of lace yarn, I didn't have any appropriate yarn. So..... 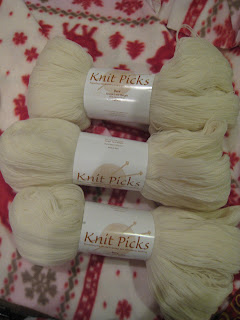 I ordered 3 hanks of Bare laceweight, which is probably about an entire hank more than I need, but I'm so frustrated over running out of yarn and/or fabric that I was being cautious. Then, before I could make it safely off their website, I was blindsided by 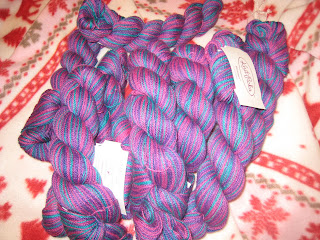 This is my favorite colorway, and it's being discontinued. Count 'em. 10 skeins--4,400 yards added to the stash. Oops. Thank heavens it wasn't a two-day window--I'd have been in serious trouble.

A friend is giving us her condo in McCall for a week, and she won't let us pay her anything for it, so I thought a scarf would be nice. I dug through my laceweight--which is really fun to do if you want to know the truth, and came up with Elann's baby lace merino, size 4 needles, and found this 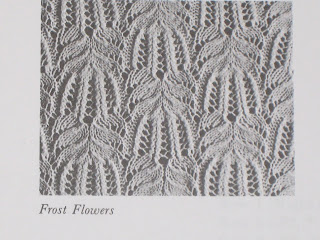 in Barbara Walker's first pattern treasury. I have loved this stitch pattern ever since I first saw it used, but after two hours, I had to admit that my particular combination wasn't working: 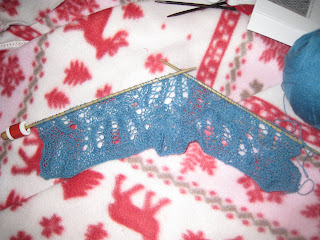 Since the pattern relies on stitch definition, my needles were way too big for the yarn I chose--not to mention that it was going to be about 13 inches wide with two stitch repeats, so I frogged it and switched to this instead: 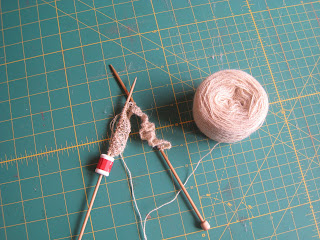 It's Knitpicks' Alpaca Cloud--a much heavier laceweight (if there is such a thing) which made the size 4 needles usable. We're using the condo in March so speed takes precidence over pattern.

Now that I have declared that my 2009 New Year's Resolution is to use up 150 balls of yarn, bulky weights and worsted weights would be my friend, wouldn't they? Yup, I keep telling myself that.... 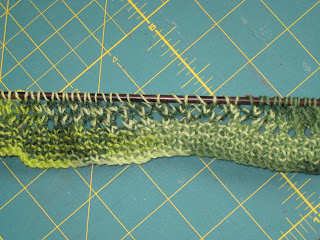 I wanted to play with another option for variegated lace yarn. WHAT AM I THINKING?????

I'm going to have to include a yardage goal now OR come to my senses and stay away from the lace yarn, but as we all know how likely that is, I hereby resolve to knit 25,000 yards this year.

Hey, a hobby that involves sharp pointed sticks is NOT for the faint of heart!
Posted by Toni at 1:56 PM 2 comments: