Originally, I had planned to can tomato salsa yesterday, but then I thought, "Hey, it's a HOLIDAY weekend.  This is not what normal people do with holidays."  So I'm doing it today instead--still a holiday, but a Monday, which sort of evens things out.  Besides, I think I sat too much yesterday.  And that would be because... 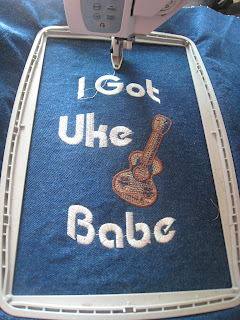 I was on a crafting marathon yesterday!  First I stitched another bag, this one for a friend of ours who just purchased a new ukelele and has a birthday this week, 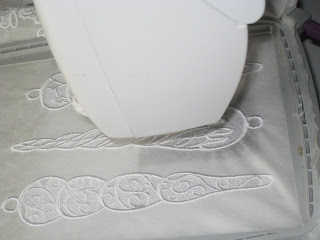 Then I did some stabilizing on the thread bowl by adding a grid: 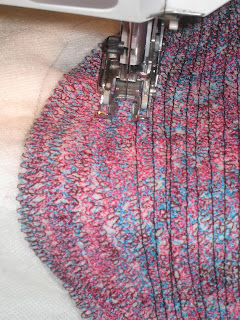 and while I've heard several theories as to why my machines hate Coats and Clark thread and can only use it when I lower the thread tension, the amount of fuzz and lint the stuff sheds might be a factor.  I've had to clean the machine twice already, and I have to brush off the walking foot even MORE often.  That can't be a good thing in thread.

I've now completed OVER 5 rows on the peach shawl, 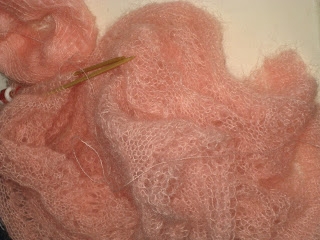 earning my first category for the "Fall Back" stash dash:  'Til Death Do Us Part.  I've still got a long way to go before I have my 3rd WIP for the current WIP marathon, but if they all move forward a little at a time, I'll get there.  I have a feeling this is going to take me through most of next year.

Then, I tried something new! 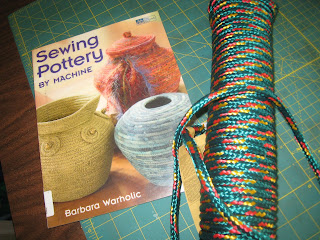 I saw this book on Amazon and would have ordered it immediately were it not for the spending ban,  but thankfully our library owns a copy.  The bows on front are made from clothesline wrapped with cloth.  The rope you see is quite a bit larger because I got 3/8-inch lodged in my head rather than 3/16-inch.  This is in a very gray area with the spending ban.  Andy picked it up for me at the hardware store, and generally when I make gifts I originally pay for the materials out of my own allowance and then reimburse myself from the general account when it's actually done.  As a fair chunk of the stash would qualify under the heading "gift ideas thought of but not made yet," it works out rather well.  But if it's for a gift I'm doing immediately, it doesn't have to go that route--like the ukelele embroidery design.  So, it feels a bit like cheating, but I was so excited that I wasn't going to argue.

As the rope was colored AND much thicker than it was supposed to be (and I'm trying to learn this), I decided to just use the rope as-is.  So many of our friends are outdoor types that a bowl made out of rope is just perfect for them anyway.

I set my machine to a zig-zag stitch, reduced the foot pressure as low as it could go, and tried to figure out how to get it started without the rope unraveling, 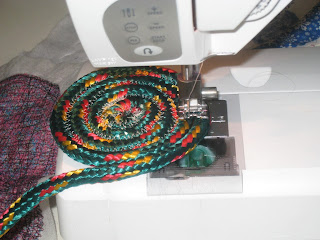 which I didn't really do well.  The idea is to zig-zag across the coils of rope as you turn, and it was about here that I realized one would probably be better off with a joining foot 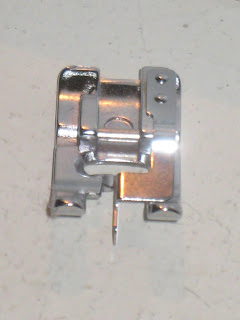 to have that guide.  Reducing the feed dog pressure enough to not catch the nylon of the rope also means the coils can slide around a lot.  Live and learn, right?

When I thought the base was wide enough for some stability, 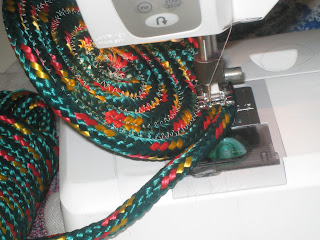 I started working the rounds at an angle to build up the sides.  The bobbin thread is what is going to show on the outside of the bowl, so one could use a decorative thread for accent.  Can't you just see all sorts of possibilities for this?

It got a bit tricky when I decided I wanted the walls to go more UP than OUT, 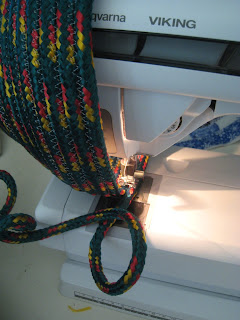 but after a little practice I was quite zipping along until 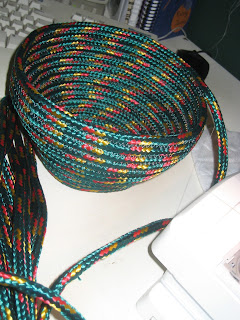 I ran out of bobbin thread.  It's a fun size of bowl, and because of the terrible fraying, I'll have to think about how to finish this off, but I am tremendously pleased with the result.  When November 1 comes, I'll be hunting down some 3/16 clothesline and trying the fabric-wrapped version.  I'm in love!!!!!