So I was going to wait until January 1 for the sake of simplicity, but after a second visit to Joann's yesterday, I'm not setting foot in that place again for the next 2 months anyway, so Crafting Buying Ban #2 kicks off today.  This year I will make one exception up front:  I didn't get another embroidery card for Jeeves, and the dealer I use is a 4-hour round trip drive away which I won't be able to do for a while yet, so if I need one next year, I can go get one.  Otherwise, no new crafting anything until November 9, 2014.

Andy's plane was arriving yesterday, so I decided to run to Joann's for the black fabric and the grocery store for chicken soup before heading to the airport.  I do not say this lightly, but the grocery store was WAY more fun than Joanns.  For those of you who don't have Joann's Fabrics, it's a big chain store that depends on volume, not loyalty.  They closed two smaller stores here a few years ago to implement a "Super Store," which included things like number tickets at the cutting counter.  I think if you plan FOR slowness, you're going to live up to it.  I got to the store, and it was busy but since it was a Friday, I thought it wouldn't be too bad, so I grabbed a number then went to get my fabric.  This was a wise move, as they were more than 25 customers behind.  I found the black cotton, 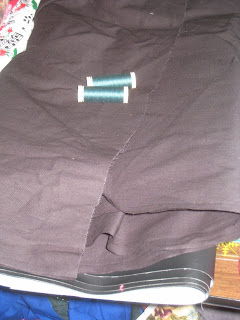 along with the one color of sewing thread I truly ran out of this year, and 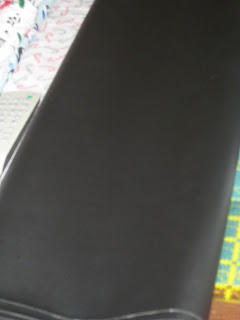 remembered that I had wanted to find some blackboard fabric to make a write-able table-runner for entertaining.  Fabric in hand, I sat down to wait for my turn..........an hour later.

I know big companies are quite loathe to pay any overtime to employees, but having THREE people at a backed-up cutting counter standing idle because one is due to go to lunch, one to go home, and the third one who presumably IS still working calling the manager for permission for them to leave while doing nothing else is guaranteed to irritate all your customers.  Especially when that leaves only one human being actually doing anything.  Lots of customers got angry and just left, which makes Joann's policy pretty stupid I would think, but it's one they've been clinging to ever since the Super Store was built, so I can only assume they are pleased with the results.  I had a book and was willing to hang in there, but when two clerks jumped in to (finally) help the lady in front of me who had more than 35 bolts of fabric to cut, I was a bit chapped.  That customer knew she was going to be there a while--the rest of us shouldn't have been kept waiting any longer because of her, but we were.  At this point I promised myself I wouldn't have to set foot in the darn place for at least a year.  Which was good, because when I got to the checkstand, 10 people were waiting in line for ONE cashier.  I'm sure under-staffing makes sense to an accountant buried in the store's back rooms somewhere, but it really makes no sense to people waiting to check out.  After that horrible experience, I don't even want to drive past the darn place.