I had a pretty good back day yesterday, so last night I felt like sewing.  At first I thought I'd whip up a few produce bags from this mesh fabric I bought a while ago, 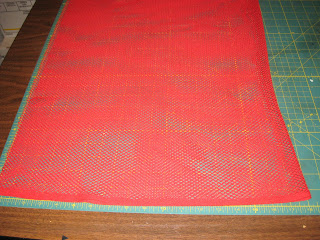 but I was using a white chocolate martini to get a break from the drugs (weird, but it works once in a while), and this fabric is NOT one to be tried when consuming anything stronger than water.  It's the sort of thing that DRIVES one to drink.  So, this will be a future project.  Like when I'm having a bad day and don't think it could possibly get any worse.

Andy and I usually make each other Valentine's gifts, and ever since I made myself a set of summer clothes from this fabric: 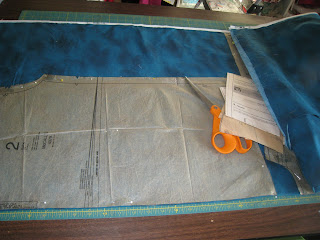 Andy has wanted some as well, so I started cutting out these last night: 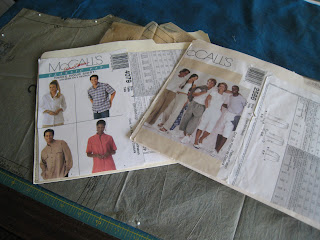 His will be the shirt with the collar and short sleeves (why do men insist on that collar?), and the long pants.  Obviously, we'll never appear in public in this sort of dreadfully-cutesy matching attire, and mine are at least crop pants and mandarin collar.  Both patterns are now out of print, which is too bad, but I have copies of the shirt in both small and medium, so we're both set for a while.

I didn't get it all pinned, but I did some before getting too sore.  Evenings are hard because I try to push myself during the days thinking, "Oh, I can just call it a day when I'm tired."  Some days that's at 2:00.  But I'm still making slow progress!

And speaking of slow progress: 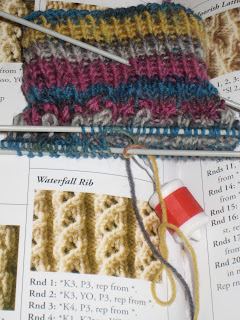 I started more socks!  I'm using a yarn that was at risk of moving into "shrine yarn" status as I really love the colorway, and I'm using a pattern that won't really show up in the stripes but will at least create an interesting texture.  For years I only made plain socks with self-striping yarns, which gets a bit dull.  One still sees the color no mater what the pattern, and this is a ribbing pattern, so it will stay up regardless of whether one can really see the stitch pattern.  It beats being bored by a pattern. So far, I love it.  The color is really fun because it's not orderly.  I'll be interested to see if it forms any sort of pattern, but it's not going straight through the colors, which is rather fun.  It's like one of those old weekly cliff-hanger movies--I have to wait and see what's next!