.....and don't think the thought of staying up until midnight hasn't crossed my mind.  But it's been a bad back week, and where willpower gives up, Valium takes over.........

I'm not sure exactly what I did, but the therapist thought that after the last couple weeks plus the don't-sit-like-this episode on Saturday, I might just need to let things calm down a bit.  We had a busy weekend, then Monday I literally spent all day canning 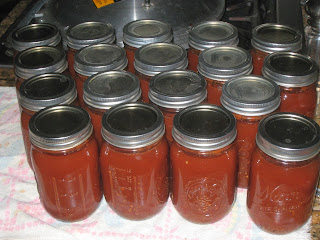 18 pints of tomato soup.  After a late dinner party on Sunday involving a little too much sitting, this was probably a factor.  However, I felt pretty good when I woke up on Tuesday, ran a couple errands, then was at the very back of a huge store when my back suddenly just HURT.  Literally, out of nowhere I could barely move--it was like being mugged by my own backside.  And, of course, because walking is so important to my therapy and general health, I had parked my blasted car in the farthest space in the parking lot.  I think there are times when it's okay to hate yourself just a little.

Anyway, made it home, crawled up the stairs, and took lots of drugs.  The level of drugs usually way beyond the "safe to knit" stage.  Theo has been in almost constant attendance, possibly because hands that aren't knitting can still pet.  The next morning it was still sore but so much better that whatever I did wasn't too serious, and the therapist today didn't find any cause for concern, but the muscles had tightened up enough that it was one of THOSE sessions--I hurt more coming out that going in.  But tomorrow I should be back on the upswing, and maybe pushing things a tad less....

Today I did get some knitting in, so 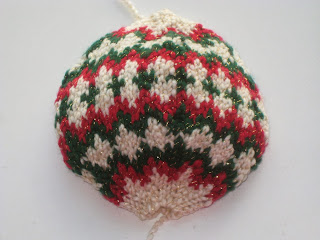