I spent yesterday doing more house prepping, but I get tired and have to take breaks, which I normally spend job-hunting, but I have decided to take a break from that abuse and instead: 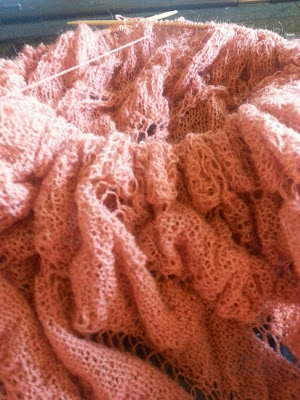 worked on the Begonia Swirl shawl.  It's down to just the last 10 rows, but they are LONG rows.  Still, a lot more satisfying than the job hunt.  I did sort of receive an update on the charity that stood me up for an interview, though not from the actual charity, of course, even after I had followed up with the regional manager about what had happened.  I'm using Indeed.com, and the website updated me that the position is no longer available on the charity's website.  This is how low things have gotten--the biggest courtesy I've received lately is from an automatic search engine.  It's so nice to be valued.

I think we'll be ready to list the house by the end of the week, which will be such a relief--although I guess then we have to deal with total strangers wandering through our house, so that might actually be even worse in some ways.  I see a LOT of long walks in my future.