In all fairness, I think ALL my yearly challenges sound pretty daft in January.  Some, of course, sound daft the entire year, and I'm thinking this one might be one of those.

Technically, I'm actually ahead of schedule and doing well, with 2 mitten ornaments and a blue bell pumped out yesterday: 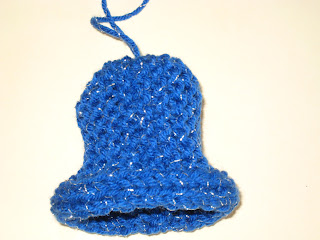 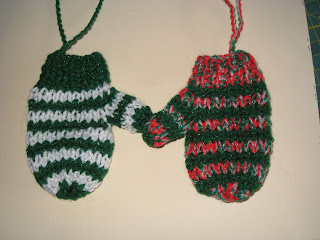 Of course, not every day is a holiday, nor do I need to be resting my back every afternoon.  My back was feeling so good on Monday that I just couldn't STOP doing things.  Nothing disastrous, but extra stretches, extra exercises--it felt so good, in fact, that I had a hard time sleeping.  It's hard to realize how exhausting pain is until it's gone.  Between the Valium and the pain, I've been sleeping a LOT, and I think I'd just reached sleeping capacity.  I had meant to crank out a few more mitten ornaments yesterday, but got distracted by other things.  Today, however, 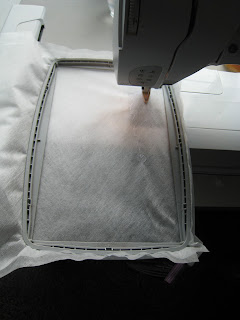 I have powered up Jeeves and am trying out some of the new embroidery designs I got back in October.  It will be a while before you'll be able to really see them in progress, but here's what some of them look like on screen: 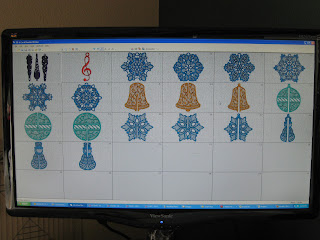 Right now I'm making the first design, which is actually 3 lace icicle ornaments lined up so I only have to hoop once.  I am a very lazy embroiderer.  Everything you see is free-standing lace.  The bells, the round ornaments, the three last snowflakes, and the snowmen are actually 3-d ornaments, so the three designs slide together to make ONE ornament.  Because of how much embroidery thread these guys use, they're sort of spendy ornaments, and it's  entirely possible that I will run out of certain colors of embroidery thread this year, which is okay.  For one, I have huge amounts of thread, and actually reaching the point where I've run out of some of it will feel good.  Then I'm not "stockpiling" or just buying it for the sake of buying it--which it sometimes feels like.  And the entire point of this year's 365 ornament goal is to make myself try some of the ideas I have, so I don't actually WANT to have 365 ornaments all ready-to-make by someone else's design.  That being said, however, I do want to make all 55 of these: 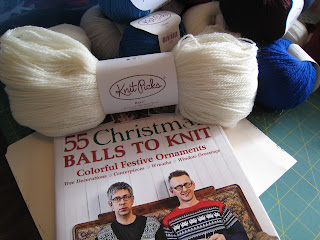 In October, before the spending ban started, I ordered some yarn from Knit Picks to use for these ornaments, but put it away when it arrived so I would have something "new" to kick off this year: 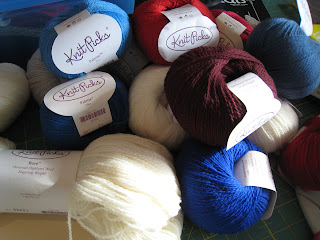 Looking back, it could have been that I was also too lazy to photograph each one to upload to Ravelry.  They're all listed in my stash--I just didn't have pictures for any of them.  It's sort of annoyingly tedious, but I have bribed myself with the capacity to cast on the first one when I get the last of the pictures uploaded.  My inner child can be bribed with yarn so easily......

I hadn't really planned to have that much time to knit today, but I am still sore and took full-strength pain medication this morning, which almost always makes me nauseous in the afternoon.  I'm not too upset--I had such a fabulous day on Monday, had a great morning on Tuesday, and got lots done this morning, so I'm still getting better and better all the time--though of course I won't be sorry for the nausea afternoons be a thing of the past.  Next week I think I can even start back to the gym!  In the meantime, I have a few ornaments to make...........